MUMBAI: This year, India’s premier education institutes, IITs, have taken the unprecedented step of naming and shaming over 30 recruiters that failed to honour commitments made to students during placements.

In a first, the All-IITs Placement Committee (AIPC) on Thursday issued a list of 30 companies — an overwhelming 28 of them being startups — that will be blacklisted for at least a year and banned from this year’s placements across IIT campuses.

“There have been instances where we have had to blacklist 1-2 companies in the past, but never so many such instances in a year. The decision to make the names public was taken unanimously since we wanted to send out a strong message to the offenders. Our students’ futures are at stake,” Kaustabha Mohanty, AIPC convenor, told ET. Mohanty said that according to rough estimates, around 120-odd students across campuses had been affected by the revoking/delaying of offers by these companies.

The AIPC meeting at IIT Kanpur in mid-August had decided that if the blacklisted companies wished to come back to the campus after the one-year period, they would first have to write to the AIPC convener justifying why they withdrew the offers. They would then need to come and make a presentation and have a one-to-one session with all AIPC members .

The blacklisted companies apart, there are another 11 startups which are being issued warning letters but whose names aren’t made public, said AIPC sources. This includes Flipkart, which despite delaying offers had later tried to make amends by offering to arrange internships for the affected students. The committee has given several reasons — from revoking of offers to delay in joining dates — for blacklisting these companies. Le-Garde Burnett Group, for instance, not just revoked offers but the company was found to be fake with no proper office address while Mera Hunar came with a different name and hired students for another startup.

The past few months have been particularly difficult for startups as funding crunch, tough market conditions and pressure on profitability have led them to not just go slow on hiring, but undertake layoffs and even revoke/delay offers made on campuses. This has taken the sheen off the sector, till recently considered hot property on campuses. Earlier in June, IITs had come together and decided to blacklist six startups. But as more instances and complaints started flowing in, the list was later revised to the present number.

“Companies need to be more aware about managing perceptions. The talent pool is an important constituent in the overall ecosystem and maybe in the desire to scale up rapidly, that hasn’t been managed well. But the role of talent is key. It’s not just about managing business plans and investors, but also about building relationships with effective sources of talent.”

Educational institutes have an obligation to students and it’s their responsibility to make students aware of these companies, said Murthy, adding “perhaps a simple letter would be enough instead of making the names public”. 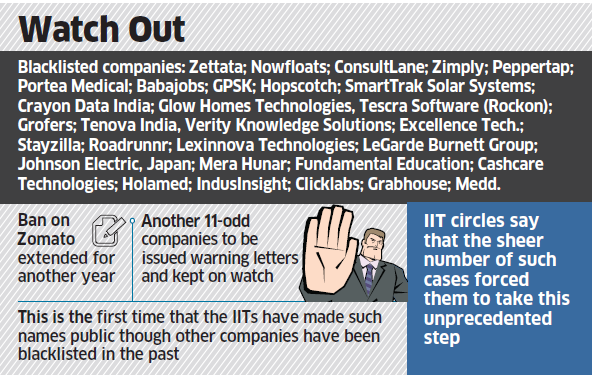 OurHealthMate will raise Series A funding by end of the current fiscal year. Plans expansion into So...
CBEC plans to speed up cargo clearances
Genuine Broaster Chicken ties up with Yellow Tie Hospitality to enter India