Extensive buying was seen in the textile stocks, such as Himatsingka Seide, Welspun India, Indo Count Industries and Trident, which rose more than 100 per cent since March 4. Apart from that, FMCG stocks Kwality and Godfrey Phillips India saw some traction. 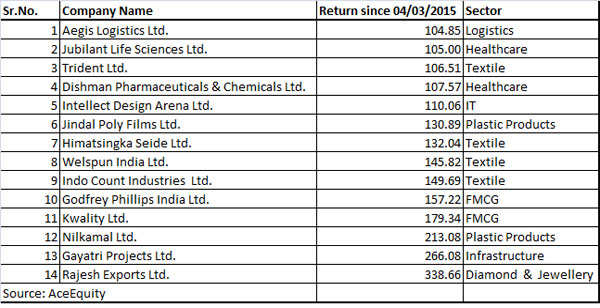 Analysts said this is the best time for investors to build a portfolio or even change their strategy because a lot of correction has already happened. Most investors were bullish on the market when Nifty50 was trading at 9,000 level, now when it is trading at 7,400, they should not miss the bus, they said.

“We hit a peak of close to 9,000 back in March 2015. If we go back by another six months, we were sailing in the Modi euphoria and nothing that this government has done tells me that this is the time to break faith,” said Dipen Sheth, HDFC Securities.

“They have struggled with a few things, they have lost a couple of elections and they have not got the land acquisition bill through, but does it mean that India is a less business-friendly place than it used to be two years ago?” he asked.

Selling was equally fierce in the market. Foreign institutional investors (FIIs), which provided the backbone to the 30 per cent rally in the Sensex back in 2014, reduced their exposure in 2015, and have been net sellers so far in calendar 2016.

A large part of the correction in the market has been because of rampant selling by foreign institutional investors, who have taken out close to Rs 10,000 crore so far in January alone. But what is comforting is the fact a large part of the selling has been technical in nature and has not been due to India-specific factors.

India’s macros are still better than most other emerging markets (EMs) thanks to a fall in crude oil prices, which are trading around $30 a barrel. “Cheaper oil (below $30/bbl) is delicious for India. The government is getting more responsible, fiscal responsibility is coming back and the CAD is healing. Policy mix is improving, although it has been a little patchy of late,” Sheth said.

“It is a good time to buy. If you are looking at it from a six-month to one-year perspective, you have to go by statistics. The Nifty50 is trading at 7,450-odd level. Statistically another 400-point slide could be in the offing in the worst-case scenario,” said P Phani Sekhar, Fund Manager-PMS, Karvy.

“But the potential upside is of around 1,600 points or more (which will take Nifty50 above 9,000). So, we are looking at a risk-reward of 4:1. Any of your esteemed technical analysts will tell you that it is as good a trade as one can get,” he said.

Guidelines for identification and selection of location as a delivery centre(s) for commodity derivatives contract.