NEW DELHI: Pawan Munjal-led Hero MotoCorphas taken six years to eclipse the cumulative sales of the previous three decades when Honda partnered the local company to build one of the most durable cross-border joint ventures. Hero’s success as a solo rider is a story of India’s journey into consumption adulthood — and a vote of confidence for homegrown talent in consumer technology.

Hero MotoCorp sold a total of 38.9 million units until the end of July 2017, overtaking the cumulative sales of 37.4 million two-wheelers registered by Hero Honda in its 27 years. Notably, in these six years, the share price of Hero Moto-Corp has also doubled, with the market cap racing past 77,000 crore.

The overall two-wheeler market has increased by over 31% to add more than 4.2 million units in this period (FY12-FY17). Total two-wheeler sales in the domestic market stood at 17,589,511units at the end of the last financial year. Hero MotoCorp had a share of 36.9%, and its nearest competitor and erstwhile partner Honda Motorcycle & Scooter India (HMSI) 26.9%. 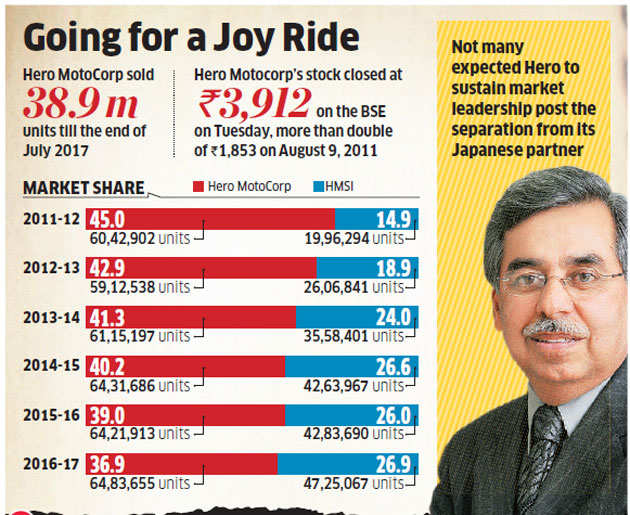 “In 2011, we went against the conventional wisdom and took the bold step of walking out of an established joint venture. We had the confidence in our inherent capabilities and our performance has vindicated our belief… The journey of Hero in these past six years reflects the story of the technology-driven new India, its youth and their global aspirations,” Pawan Munjal, chairman of Hero MotoCorp told.

Sridhar V, Partner, Grant Thornton India, said: “The market for two-wheelers has expanded at a rapid pace over the last decade with coverage of the urban, semi urban and rural markets. It is not surprising that companies have been able to grow and sustain volumes-… by meeting customer expectation and through quality.”

Hero Group unveiled the new identity of the solo brand Hero MotoCorp — after its separation from Honda Motor Co of Japan — on August 9, 2011. Critics had, at that time, raised concerns about Hero’s future as the company relied on Honda for product technology. Not many expected Hero to sustain market leadership after the separation.
To be sure, Honda has since narrowed the lead, but Hero has managed to maintain its pole position in the domestic market. In the last financial year, HMSI’s volumes grew by 10.30% to 4.73 million units, 1.75 million units behind Hero MotoCorp, whose sales remained largely flat at 6.48 million units.

Hero’s new products, developed with its own technology, have helped the company maintain over 50% share of the domestic motorcycle market. Its mainstay remains the Splendr, which with sales of 2,550,830 units contributed nearly 40% to overall sales of the company last fiscal.

The challenge for the company lies in cornering a larger pie in the country’s fast-growing scooter segment where former partner Honda controls as much as 60% of the market compared to Hero’s 12.7%. VG Ramakrishan, managing partner at Avanteum Advisors, said: “Honda has been growing faster than the market and gaining share. Besides, with increased emphasis on electrification in automotive space, it will become all the more crucial for Hero to have a good presence in the scooters segment.”

Introduction of the automatic transmission in scooters, rising urbanisation, and female consumers have driven the share of scooters in the country’s overall two-wheeler market to 33% last fiscal from 21% in FY13. In these same five years, the share of commuter motorcycles (100-110 cc) has declined to 37% from the earlier 47%. To strengthen its footprint in the segment, Hero has lined up new scooter models for launch over the next few quarters.

Besides, consolidating its presence in the domestic market Hero MotoCorp has also expanded its presence to 35 countries across Asia, Africa and South & Central America in the last six years. The company has invested heavily in ramping up its in-house R&D capabilities and set up the Centre of Innovation and Technology (CIT) in Jaipur.

“We are not going to rest on our laurels. We will continue to set new benchmarks in developing new technologies for the future of mobility and we will also continue to keep expanding our global footprint,” Munjal added.

On the capacity front, Hero is well placed. Hero MotoCorp currently has an installed domestic capacity of around 8.9 million units, which will go up to 10 million once its plants in Gujarat and Andhra Pradesh become fully operational. Its closest competitor HMSI has a capacity of 6.4 million units across its four manufacturing facilities in Haryana, Rajasthan, Gujarat and Karnataka.