N Chandrasekaran, the newly-appointed chairman of Tata Group which sough to bring some stability, completed his first year on February 21. However, Tata Group companies have failed to outperform the Nifty in the last one year.

India Index Services & Products Ltd (IISL), an arm of National Stock Exchange (NSE), launched Tata Group index in the year 2015, which is one of the kind index which tracks 25 companies of Tata Group across 12 sectors.

The index is computed using the full market capitalisation method. This method is used to measure the total equity value of the Tata group companies listed on National Stock Exchange of India.

The Nifty Tata Group index gave a return of 16.2 percent compared to 16.5 percent delivered by the Nifty in the last one year, data showed.

Tata Consultancy Services (TCS) which lost its spot as number 1 company with respect to market capitalization to RIL, holds maximum weightage of 57.63 percent in the index as of January 31, 2018, data.

Before taking charge as chairman of Tata Sons, the holding company, Chandrasekaran was the managing director and chief executive of TCS, which commands the second highest company by market valuation at Rs 5.6 trillion.

Chandra also chairs the boards of several group operating companies, including Tata Steel, Tata Motors, Tata Power, Indian Hotels and Tata Consultancy Services (TCS) — of which he was a chief executive from 2009-17.

Under his leadership, TCS generated total revenues of US $16.5 billion in 2015-16 and consolidated its position as the largest private sector employer in India and the country’s most valuable company. 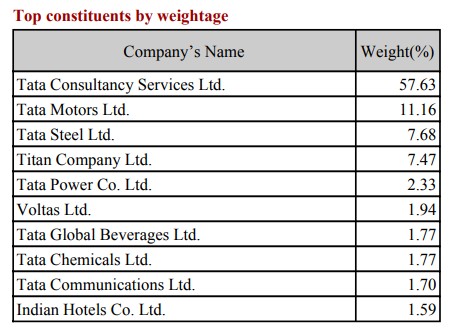 V-Guard, Manappuram Finance can give 10-12% return in 15-21 sessions by going short
Trade Setup for Thursday: Top 15 things to know before Opening Bell
BofaML’s Mookim is not comfortable with market’s valuations yet; likes housing space