New Delhi: It has been termed a potential game changer, the single biggest tax reform undertaken by India in 70 years of independence, one the government says is founded on the concept of “one nation, one market, one tax.”

The moment, which India has waited for more than a decade, is finally beckoning. On 1 July, a single indirect tax regime will kick into force in Asia’s third largest economy, dismantling inter-state barriers to trade in goods and services. 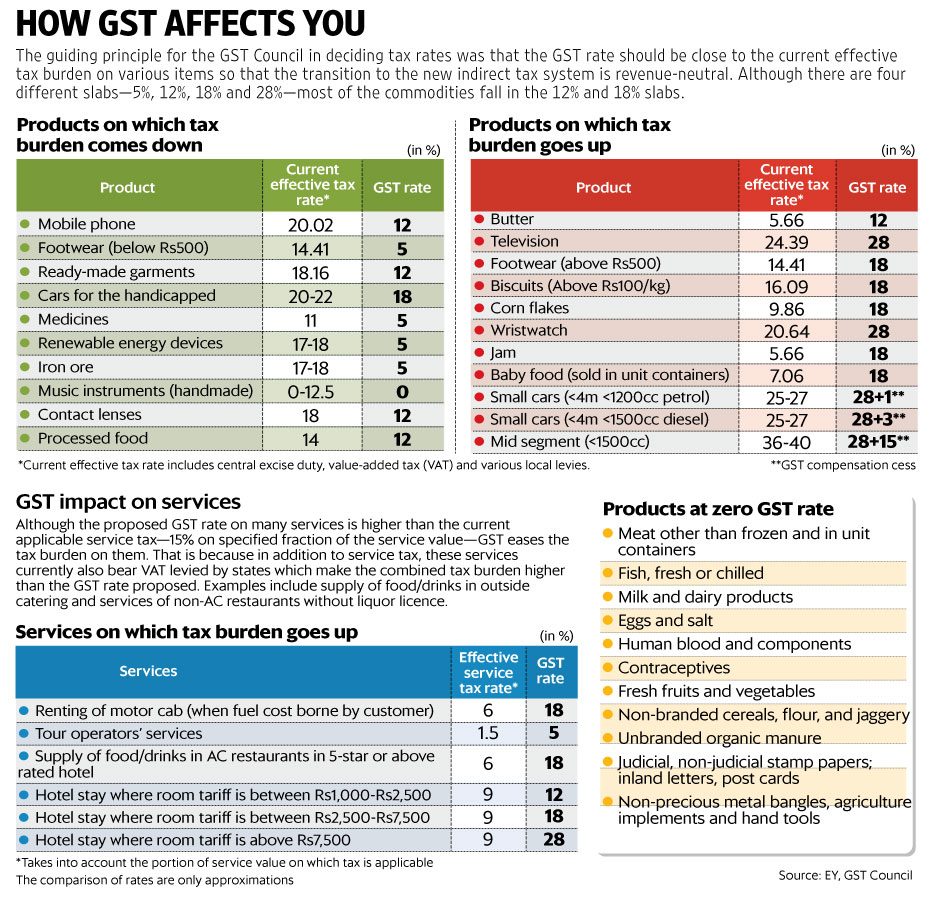 “The rollout of the goods and services tax (GST) on 1 July will, in a single stroke, convert India into a unified, continent-sized market of 1.3 billion people,” Prime Minister Narendra Modi wrote in an oped for the Wall Street Journal on his visit to the US in the last week of June.

Essentially, the $2.4-trillion economy is making a bold attempt to transform itself by removing internal tariff barriers and collapsing 17 central, state and local body taxes into a single GST.

Corporate and consumer expectations of the tax reform, which some economists say could add between 1 and 2 percentage points to India’s annual growth rate, are high. Modi’s National Democratic Alliance (NDA) government pulled it off by amending the Constitution—a feat difficult to achieve in nations where states and local bodies enjoy sovereignty in taxation.

The US, for example, has not implemented a GST yet. The place of GST in the government’s priority list is evident from the fact that the seminal tax reform will be ushered in at a midnight ceremony in the Parliament’s central hall attended by President Pranab Mukherjee and state chief ministers besides Modi. The last time Parliament witnessed such a gathering was when India became independent from British rule in 1947.

Akin to a free trade agreement

Finance minister Arun Jaitley said on 20 June that with GST, the economy will become more efficient and revenue receipts will go up as more of the informal economy becomes a part of the formal economy. This, he said, will improve the spending capacity of both the central and state governments, accelerating the gross domestic product (GDP) growth rate.

According to Ansh Bhargava, a senior consultant at Taxmann.com, a company that assists taxpayers, the concept of a single market across the nation is akin to different states of India signing a free trade agreement.

“The GST regime seeks to break the barriers that currently exist between states and make movement of goods between different states easier,” said Bhargava.

GST seeks to move away from a system in which tax is added on to the post-tax value of goods from the previous stage in the value chain, which has led to a compounding effect of tax-on-tax on commodities and services. The reform seeks to remove this anomaly by giving full credit for taxes paid at the previous stage. At present, states try to maximize their revenue by denying full tax credit in case of inter-state commerce. Under GST, interstate supplies will be taxed across the country at a uniform rate specified for the item with full credit settlement.

GST could also reduce avoidable litigation. A large part of tax litigation in India is around tax exemptions, which the new system seeks to minimize.

If the reform succeeds, it could improve the ease of doing business in India. Putting an end to a multilayered tax system, dismantling border check posts and eliminating the need for face-to-face meetings between executives and field officers of the tax department, will contribute to that.

Consumers, on the other hand, will for the first time get a measure of the total central and state taxes levied on a product, bringing to an end the host of hidden and embedded taxes they were paying so far.

However, many believe there is some hype around the anticipated benefits since the current version of GST is a diluted form of what was originally considered ideal—a low, single tax rate with few exemptions. The current form has four rates for goods and services—5%, 12%, 18% and 28%—and excludes five hydrocarbons—crude oil, petrol, diesel, jet fuel and natural gas—as well as liquor, real estate and electricity from the purview of GST. Oil and liquor are among the biggest tax revenue sources for the federal and state governments. The authorities insist most items are placed in either the 12% or 18% slab and only a few are in the highest 28% slab.

Despite the imperfections, indications are that GST is going to benefit the system. Jaitley said on 20 June that indirect tax revenue had increased in April and May from a year ago, suggesting that goods which previously used to enter the value chain undeclared are now being traded legitimately. Agriculture markets are already witnessing a reduction in dodgy cash transactions.

In the pre-GST regime, the federal government taxed production of goods and supply of services, while states got to tax sale of goods but not supply of services. In GST, this barrier is removed and both the federal and state governments get to tax the entire value chain of goods and services, increasing compliance, explained V.S. Krishnan, adviser (tax policy group) at EY India and a former tax official with the Indian government.

What is in store for consumers

In the case of many goods, there could be a reduction in tax burden as the GST Council, the federal indirect tax body, has gone the extra mile to correct prevailing high tax rates on items as basic as school bags. Among services, GST on economy-class air travel is lower at 5%, compared with the effective pre-GST service tax rate of close to 6%. But the tax burden on first-class air travel could go up by three percentage points to 12% in the new regime.

One concern in industry is a possible increase in tax burden on certain services. Taxing services at par with goods is a global practice GST has adopted. The GST rate on telecom services, for instance, has accordingly gone up to 18% from the earlier 15% service tax rate. This has led to concerns about a possible increase in telephone bills, although the government has stressed that tax credits available to companies from the service tax paid earlier on spectrum payments will more than offset the rate hike.

“The jury is still out on the impact of GST on cost of telecom services as there is a lot of fine print on this subject. Once the new regime kicks in, we will get clarity based on the billing in the first couple of days,” an executive with a telecom service provider said on condition of anonymity.

The biggest concern for authorities is whether there will be supply disruptions and whether firms will resort to profiteering. To ensure GST is not inflationary, an anti-profiteering authority is being set up.

On their part, producers of items such as apparel and shoes, which have a seasonal market, are offloading their entire summer stock before 1 July by offering large discounts.

Harkirat Singh, managing director of Woodland Worldwide, a maker of shoes and accessories, said his firm had kicked off its end-of-season sale ahead of GST’s introduction. “We are trying to liquidate our summer merchandise which we do not want to carry forward to coming months,” he said, adding that most of Woodland’s footwear falls in the 18% slab, which may translate into a marginal increase in cost. “However, we have decided to absorb this cost and not pass it on to consumers,” Singh said.

While most tax experts ruled out the possibility of supply disruptions, an industry executive, who spoke on condition of anonymity, said some firms may optimize their stocks in the run-up to 1 July. Seeking to prevent any supply disruption, the government has clarified tax credits on the pre-GST stocks will not be a problem after 1 July.

“Businesses are not changing inventory and supply patterns but at the retail level, traders may be destocking in the run-up to GST and restocking in the months immediately after the transition,” said Anil Rai Gupta, chairman and managing director at lighting and electrical appliances firm Havells India Ltd.

Praveen Khandelwal, national secretary general of Confederation of All India Traders, a trade lobby, said it was business as usual for traders ahead of GST, and that consumers need not worry about any supply disruptions.

A tale of compromise

Rolling out GST on 1 July is the result of more than a decade of discussions, tussles among states, and between states and the Union government, instances of give and take, lobbying and compromise. The highlight of the reform is the creation of the federal tax institution, the GST Council, which has state ministers as members and the Union finance minister as chairman and gives every state a say in the country’s indirect tax policy. The GST that is being rolled out is far from ideal. The guiding principle for the government while trying to secure consensus amid competing interests of various stakeholders was that it is better to have a good GST instead of waiting endlessly for the best one.

The GST Council will consider inclusion of hydrocarbons in the new tax regime once state revenues stabilize. Nearly 40% of state revenue is estimated to be from petroleum products.

“Introduction of GST is a very good start. Reforms, however, do not end here. Certain features can be further streamlined,” said Prashant Deshpande, partner at Deloitte Haskins and Sells Llp.