Bond dealers were in for a surprise as the government on Monday moved to ease pressure on the market considerably by reducing the first-half borrowing programme to 47.5 per cent of the total budgeted borrowing, against the normal practice of borrowing 60-65 per cent.The Centre said it would borrow Rs 2.88 trillion in April-September 2018-19, against market expectation of Rs 3.3-3.6 trillion. The weekly borrowing size would also be Rs 120 billion, against the usual Rs 150-180 billion, a great relief for the markets.Economic Affairs Secretary Subhash Garg told reporters that the government would draw an additional Rs 250 billion from the National Small Savings Fund (NSSF) to finance the fiscal deficit for 2018-19. As against an earlier estimate of Rs 750 billion, now Rs 1 trillion will be drawn from the NSSF to finance the fiscal deficit.The Centre will also reduce its planned buyback of government securities (G-Secs) by Rs 250 billion. Hence the gross borrowing for the year will be reduced by Rs 500 billion to Rs 5.56 trillion. Net borrowing, budgeted at Rs 4.62 trillion, will also see a net reduction of Rs 250 billion due to the higher amount drawn from the NSSF.Buyback of government bonds is outside the calculation of fiscal deficit and net borrowing does not get affected by a change in plan, though gross figure changes.“With this programme, we are absolutely confident that we will be able to meet all the expenditure requirements of the central government, without getting into an overdraft situation. We have one more instrument available with us, which we will use. The budget allows Rs 1 trillion worth of cash management bills to be issued. We will use that,” Garg said.The RBI, on behalf of the government, will be issuing bonds in 1-4 year maturity, raising Rs 240 billion through the papers. Inflation-indexed bonds linked to the consumer price index (CPI), and floating rate bonds will be used to raise 10 per cent of the first-half borrowing. The maturity of these bonds were not discussed, but should be at least 10 years.Bond dealers had lobbied hard with government and RBI officials for issuing of such bonds.“We have been doing flexible rate bonds (FRBs), but we will also be introducing inflation-indexed bonds linked to the CPI. A couple of years back, we had done wholesale price index (WPI)-linked bonds. Floating rate bonds (FRBs) and CPI-linked bonds will be within 10 per cent of the overall issuance programme,” Garg said.The borrowing will also be done through instruments that have been in demand in the market, instead of a maturity profile in the shape of 10-14 years, easing the redemption pressure on the government at the cost of duration risk on the books of banks. The ten years and lesser basket has ready takers in banks, whereas 15 years and above are attractive for insurance companies. The 10-14 year segment constituted 52.2 per cent of the first- half borrowing last year. Now this maturity will be used to raise 29.2 per cent of the first-half borrowing.“CPI-linked bonds will have much better chance of success compared to WPI linkers,” said A Prasanna, chief economist of ICICI Securities Primary Dealership.The government seemed to have taken the market feedback seriously this time. While every year government officials meet bond dealers, this time, the government called them to New Delhi to discuss their discomfort. Generally, the meeting takes place at the Reserve Bank of India premises in Mumbai, with a few senior government officials attending.“This is an extremely positive borrowing plan from the government.

The maturities and the instruments they have chosen were for long demanded by the market participants. The 10-year bond yields should open around 7.40 per cent when the market opens, and should trade around 7.25-7.50 per cent in the next few months,” Prasanna said.The 10-year bond yield closed at 7.62 per cent on Monday. The borrowing profile will help banks and other investors invest in bonds again. 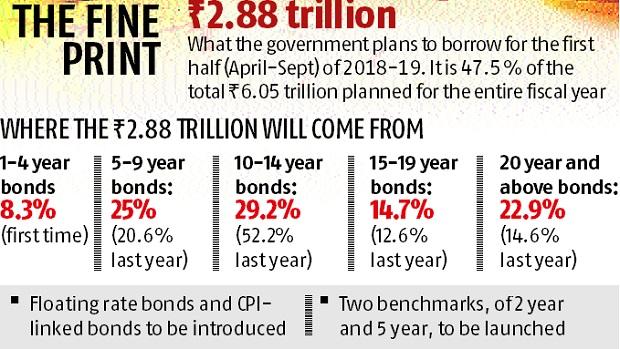 Considering that gross borrowing does not change much, this is essentially the buying time, which will last till September. The government hopes bond yields will settle by then for investors to continue with their interest in fixed-income instruments. Yields have risen 100 basis points since September till now, causing the banking industry a nominal loss of at least Rs 250 billion.“There is no doubt that the borrowing plan is very positive, but it is temporary. By introducing shorter tenure bonds, the redemption pressure will become massive after just a few years, which will have its own repercussions,” said Soumyajit Niyogi, associate director, rates, India Ratings and Research.The government also said it would introduce new benchmarks in the 2-year and 5-year categories. While there are 5-year and 2-year bonds in the market, these are essentially those that are coming closer to maturity. Therefore, the maturity profile of existing bonds is residual, rather than targeted. Introduction of benchmarks mean the government will be raising money through these bonds and liquidity will build up in this maturity basket, helping in the creation of many other derivatives. According to analysts, CPI-linked bonds will also bring in more investors. The government had previously introduced a WPI-linked bond, but that did not succeed as the RBI started formulating monetary policies targeting CPI inflation. The WPI-linked bonds had to be bought back by the government subsequently. However, bunching up issuance in the second half has its own risk, especially as state government loans are also increasing in size.“Issuance in the second half will be no less critical given the US Federal Reserve rate trajectory, the government’s fiscal condition, the RBI’s stance on rates, and of course demand for credit in the banking system,” Niyogi said.“There is no indication that we are pushing more towards the second half of the year. If you factor in additional flows from elsewhere, our second half will not be crowded. So there is no shift to the second half,” Garg said, allaying fears.business-standard

IIFL Financeto raise up to Rs. 2,000 crore via Bonds