Mumbai: India might need 167 fighter jets worth more than Rs1 trillion, the order process for which could be completed in the next 12-18 months, a top executive at Mahindra Group said, as it prepares to bid for some of the military orders on the cards.

“The government has already come out with tender process for 110 fighter jets, and navy also has requirement for another 57 jets. So total requirement appears to be 167 jets at this stage,” said S.P. Shukla, group president, aerospace, defence and steel, at Mahindra Group, and chairman, Mahindra Aerospace.

“The government’s plans to place orders are likely to be valued over Rs100,000 crore (Rs1 trillion),” Shukla said, adding the supply of these fighter jets may be spread over three-seven years after the placement of orders, depending upon requirements and scheduling.

The F/A-18 Super Hornet’s ‘Make in India’ proposal is to build an entirely new state-of-the-art production facility and develop an ecosystem around it that can be utilized for other programmes like India’s Advanced Medium Combat Aircraft (AMCA) program, Boeing had said in a statement earlier this month.

The government has come out with Request for Information (RFI) for the fighter jets, which will be followed by Request for Proposal (RFP), product evaluation process, and opening of commercial bidding, Shukla said.

“The whole process is expected to take about 12-18 months before the order is awarded.”

“Hence, what we are talking about is estimated requirements and not the exact order sizes,” he said.

The joint venture to produce F/1-18 Super Hornet fighter jets will keep its costs competitive in order to win the bid, Shukla added. 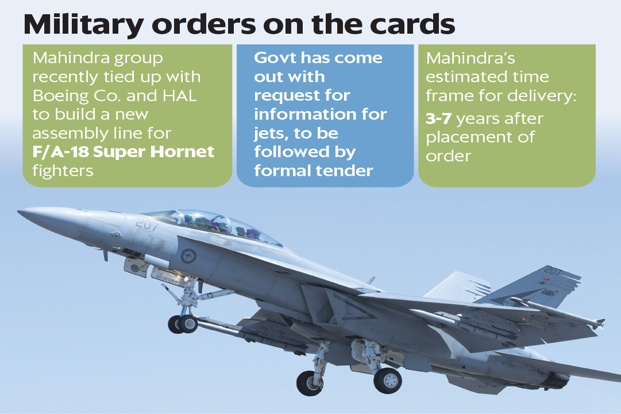 News agency Bloomberg had in February reported that India is planning to revise the specifications for one of the world’s biggest fighter jet orders, a move that would allow manufacturers such as Boeing and United Aircraft Corp. to pitch their twin-engine combat aircraft.

The report, quoting unnamed officials, added that the government has asked the Indian Air Force if the search for fighter
jets could be expanded to include twin-engine aircraft after Lockheed Martin Corp. and Saab AB were the only ones left in the fray with single-engine products that met the earlier norms.

The Bloomberg new report stated the country’s armed forces would require as many as 400 single- and double engine combat aircraft.

During August 2007, the then Indian government under the erstwhile Congress-led United Progressive Alliance (UPA) signed an agreement with France’s Dassault Aviation SA to buy 126 Rafale jets for $11 billion. However, with talks stalling over price and quality guarantees, the current government subsequently scrapped the purchase and bought 36 jets separately.

“We estimate that the government is looking at procurement numbers which will be in three digits,” Shukla said adding the future orders for combat helicopters could come from any wing of the armed forces—the navy, the army and the air force.livemint