Life insurance is a product that’s sold and not bought. At least that’s what the insurance industry believes and therefore banks on its army of agents to convince you to buy life insurance. For this, the agent gets a cut from the premium that you pay. So, every time you cut a premium cheque, the agent makes money too. In other words, agents are entitled to a commission not just on selling a policy, but also when you pay renewal premiums.

Renewal commissions are given as an incentive to keep the agent’s skin in the game so that he remains motivated to service your policy. You would think that this steady pipeline of commission stops when the agent leaves you, right? Wrong. The agents can get commissions even after they stop servicing your insurance policy. Till 2015, this was the law, but the Insurance Laws Amendment Act, 2015, repealed the law and subsequently the decision moved to the board of insurance companies. Read on to understand the old rules and how they have changed now, and what that means for you. 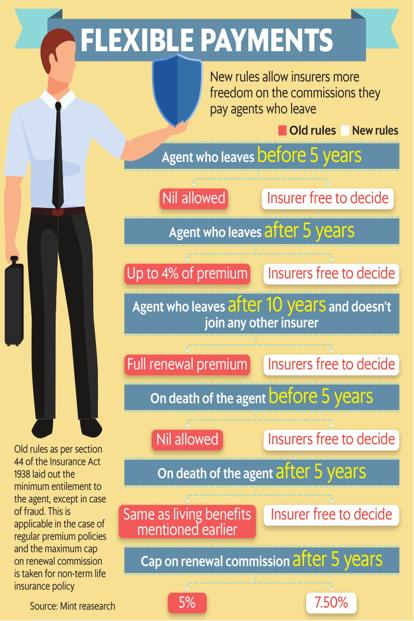 Life insurance products are front loaded, in which a fat chunk of the premium that you pay in the first year goes to the agent.

Currently, for term plans the maximum commission is ₹ 40 and for other bundled plans (excluding pension plans), the maximum is ₹ 35 on a ₹ 100 premium. Subsequently, on renewal, the agent is entitled to a commission that’s capped at ₹ 10 for term plans, and ₹ 7.50 on a ₹ 100 premium for other bundled life insurance plans. Till FY17, the renewal commission was capped at 7.5% only in the second and third year and reduced to 5% thereafter.

The same rules applied if an agent died. The commission, also called hereditary commission, in this case went to the nominee of the insurance agent. “The rules were drafted at a time when LIC was the only life insurance company in the market and the financial market was under developed. Given the popularity of insurance products in the high interest rate regime, it was imperative to protect agents by guaranteeing commissions even after termination. But the situation has changed now,” said C.L. Baradhwaj, executive vice-president, legal and compliance and company secretary, Future Generali India Life Insurance Co. Ltd.

Of course, hereditary commissions or renewal commissions are paid if the policy is active, which means the customers need to be paying premiums.

Insure₹ have not altogether done away with paying commissions to dead or non-servicing agents, but their board policy seems to be influenced by the amount of business coming in through agents. IndiaFirst Life Insurance Co. Ltd, for example, gets about 10% of its business through the agency channel. It doesn’t pay renewal or hereditary commission to agents who no longer serve the customers. “Renewal commissions are meant as remuneration for agents to service the customers, so it doesn’t make sense for us to pay a renewal commission if the agent is no longer serving the customer,” said R.M. Vishakha, managing director and chief executive officer, IndiaFirst Life.

Reliance Nippon Life Insurance Co. Ltd, which sources nearly 65% of its business through agents, pays hereditary commissions but not renewal commissions as it doesn’t make economic sense. “The earlier premise of continuing to pay renewal commission to terminated agents was that the terminated agent, due to his proximity with the customer, continues to serve the customer. However, in reality, we saw minimal support from agents beyond their tenure. In turn, we had to set up direct service teams and call centres for renewal reminders, and payment collection services,” said Ashish Vohra, executive director and chief executive officer, Reliance Life Insurance.

Max Life Insurance Co. Ltd also pays only hereditary commission, but HDFC Standard Life Insurance Co. Ltd pays both. “Hereditary commissions are paid as per the erstwhile Act. So the nominee of the deceased agent who has worked for 5 years, gets the renewal commission. Even agents who have worked with us for 5 years and are 60 years of age at the time of leaving us and have a certain minimum renewal premium, are entitled to renewal commission,” said Suresh Badami, chief distribution officer, HDFC Standard Life.

Most insurers now seem averse to paying renewal commissions, though they are open to hereditary commissions. High costs of retaining customers could be a reason. “Whenever an agent leaves and the policies are orphaned, the company takes over the policies, reaches out to the customers and starts servicing them through the relevant teams. Hence, paying the agent is not feasible,” added Badami.

What it means for you

The new rules mean little for you in terms of cost, as the commissions saved don’t get added to your policy. The charges in the policy are spelt out and don’t alter. Insurers redirect these costs to manage orphaned policies. The insurer will either service you directly or assign another agent, but this doesn’t mean an increase in commission outgo either. In other words, nothing changes for you in terms of costs, but lots will change as your ‘go to’ agent is no longer at your service. Make sure you reach out to the insurer to handhold you. Do not feel orphaned even if the industry parlance calls you that.

Healthcare Akhil Gore - May 15, 2021 0
The West Bengal government on Saturday, May 15, announced a complete lockdown to contain the further spread of COVID-19 in the state. The curbs...

Poco M3 Pro 5G launch on May 19: Specs, features, India price and everything...

Technology Akhil Gore - May 15, 2021 0
Current smartphone trends suggest that 5G has suddenly become super important. Not just the high-end smartphones but even the midrange one's have started prioritising...

West Bengal announces total lockdown from May 16 till 30 amid...