This year, the finances of the Indian Railways were presented along with the Union Budget on 1 February, and are scheduled to be approved in the next few days. Here is a look at some key issues and trends.

Internal revenue generation has been declining

The railways’ internal revenue for 2018-19 is estimated at Rs2.01 trillion, 7% higher than the revised estimates for 2017-18. The majority of this comes from freight and passenger traffic, estimated at around Rs2 trillion. However, over the last few years, railways’ internal revenue has been falling due to a drop in the growth of both freight and passenger traffic. Expenditure on salaries and pension has been increasing

Railways’ operating expenditure for 2018-19 is estimated to be Rs1.88 trillion, up 4% from 2017-18. About 66% of this goes towards the payment of salaries and pensions. This component has been gradually increasing, with a jump of about 15% in the last two years due to implementation of the Seventh Pay Commission recommendations. The pension bill is expected to increase further in the years to come, as about 40% of the railways’ staff was above 50 years in 2016-17.

Rs500 crore has been allocated towards the Depreciation Reserve Fund, which provides for the cost of new assets replacing the old ones. This is significantly lower than last year’s allocation of Rs5,000 crore.

Consequently, operating ratio has been on the higher side

Operating ratio is the ratio of working expenditure (expenses arising from day-to-day operations) to revenue earned from traffic. A higher ratio indicates a poorer ability to generate surplus that can be used for capital investments such as laying new lines and deploying more coaches. Capital expenditure is increasingly getting financed through borrowings 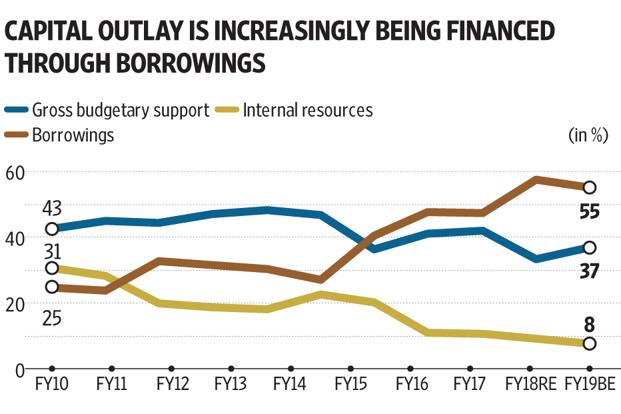