Acomment made by Rajeev Misra, a board member of Softbank and about to join the Uber board, triggered a strong buzz on Friday that the Travis Kalanick-founded ride hailing firm may step off the pedal in India. Talks of a possible merger between Ola and Uber, with Softbank as the common investor, also did the rounds.With the formal closing of the $9.3-billion investment, Japanese tech conglomerate Softbank has become the largest shareholder of Uber.Misra told the Financial Times that Uber would have a faster path to profitability if it returned to its core markets such as the US, Europe, Latin America and Australia. ‘’This is a growth company, this is not just about them cutting their losses,” he said. “Who cares if they lost a billion more or half a billion less?”Softbank is the single largest investor in Didi Chuxing in China, Ola in India and Grab in Southeast Asia. In each of these markets, Softbank has backed local players for growth over Uber. In fact, Softbank is learnt to be in talks to buy Tiger Global’s stake in Ola.An Uber India spokesperson dismissed any talk of a merger between Ola and Uber as a baseless speculation. “Our business in India is stronger than ever and we are 100 per cent committed to serving our riders and driver partners in India”, the spokesperson said in a statement. Ola refused to comment on competition.Uber’s shift to its main markets is likely to reduce the fight with Ola in India that has seen billions of dollars thrown on incentives and discounts to woo drivers and customers on to their respective platforms.However, over the last one year, both firms have tactically cut incentives and discounts. Yet they are still burning cash.Bhavish Agarwal, co-founder of Ola, is expected to raise big-ticket funds, estimated around $1 billion more, for expansion as well as newer growth initiatives such as electric vehicles, autos and bicycles.Ola has projected 2019 as the year to turn profitable.

It’s targeting to generate cash profits of over $1 billion by 2021.It is still not clear whether Softbank would pursue a merger between Ola and Uber, similar to how the dominant Didi Chuxing acquired local stake of Uber in China with a minority stake to the US company. If there is a merger, it could also attract the attention of the Competition Commission of India.Ola claims market leadership with presence in over 110 cities, covering around two million rides a day, while Uber with presence in 25 cities does around one million daily rides, according to estimates.Analysts say that India’s taxi sector is seeing a pusback from traditional operators. With lower yields in India, it makes sense for Uber to focus on its higher revenue market, they say.“To improve financial metrics, it makes sense for Uber to focus on Europe and the US, where the revenue per trip is higher. There is resistance from fleet taxis which believe that Ola and Uber are eating into their business. Those operators are demanding that the ride hailing business should also be included in the regulation,” says Devangshu Dutta, chief executive of Third Eyesight, a consultancy.“If ride hailing services need to undertake the same level of compliances that fleet taxis do, Uber will find it difficult to make money in a competitive market where yields are low,” he said.Karnataka, which is among the largest ride hailing markets in India, has brought in a regulation that has fixed minimum and maximum ride hailing fares based on the value of the vehicle, to ensure that drivers are adequately compensated and does not disrupt the traditional taxi market.business-standard 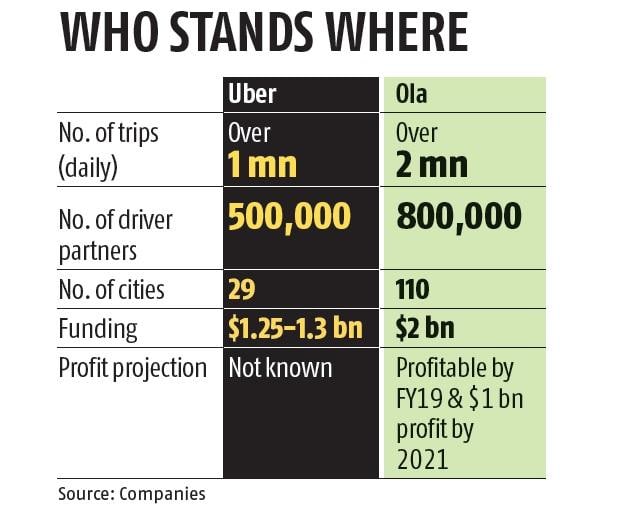