At the much-awaited ECB meeting on Thursday, the central bank moved ahead with its version of “tapering” its quantitative easing (QE) programme. The announcement was short of expectations, wherein the ECB shied away from putting a definite end date to QE. European equity markets reacted positively to this dovish stance. The Euro Stoxx 50 ended +1.35 percent yesterday followed by a rise of 0.7 percent at the time of writing today. EUR/USD and German bond yields were lower.

What did the ECB do?

In a major policy shift, the ECB scaled down its QE programme wherein the quantum of bond-buying was reduced from EUR 60 billion a month to EUR 30 billion from January 2018 until September 2018. While this significant directional shift is along expected lines and is tantamount to unwinding, it comes with a caveat that it is “open-ended”.

Why is it still seen a dovish step?

Given the strength of the Eurozone economy and the ECB’s own assessment in earlier policy meets, the Street was expecting a plan to phase out QE. While Mario Draghi has initiated a gradual exit, his assertion that the programme remains open-ended (and hence bond-buying could increase if conditions worsen), along with the possibility that bond-buying can extend beyond September, is seen as a continuation of easy money for a longer duration.

In fact the amount of scale-down in bond-buying also doesn’t look as substantial when we account for re-investment proceeds. In an email conversation, Giles Keating, Chair of Investor Advisory Firm Werthstein Institute, says that if we add re-investment of maturing holdings, which averages about EUR 15 billion a month,  gross bond-buying is still EUR 45 billion.

As per reports, 4 of the 25 members of the ECB Council wanted a more concrete plan for unwinding QE with an end date to it. However, ECB opted for a gradual exit plan without causing any spurt in bond yields and Euro appreciation.

Chart: EUR/USD vs. differential yield for US treasury and German 10-year yield EUR/USD has appreciated by about 15 percent this year till mid of September after retracing first due to political crises in Catalonia and then owing to the dovish ECB stance.

EUR/USD pair can further retrace as the market waits for year-end Fed meetings. FOMC’s September meeting minutes revealed that most members opine that another increase in the policy rate later this year is warranted. The implied probability of a Federal Reserve policy rate increase in December is higher than 90 percent. 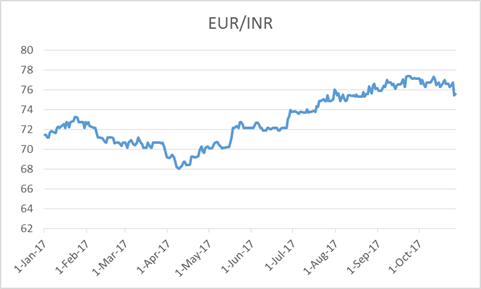 For Indian exporters, this means that the currency headwinds from the Eurozone, which started with Catalonia, extend a bit further.

Excess2sell Raises $1 Million In Latest Round Of Funding