When a young man in Ranchi first told me he was going to cheat a bank, I was scared for him. In my basic understanding of Indian banking, only the rich got away with not repaying loans, whereas ordinary people got old paying their EMIs. The 19-year-old I had been talking to was almost poor. He had applied for a loan under a state scheme to help the jobless launch their own enterprise, one whose existence they would have to prove to the bank. If he managed to get Rs1 lakh to breed honeybees, he said, he would use the money to go to Mumbai and become a film star. What about the visits from the verifying committee? He said he could rent the bees and boxes for just a few thousand rupees. I asked him if he had no other way to fund his dream. He said no. “You’ll get into trouble,” I said. He said I shouldn’t worry.

I did stop worrying at some point—not just about him but a host of young people who were writing their own definitions of right and wrong. I even began to see their point. As the wannabe superstar explained to me at length, he didn’t exactly mean to cheat: If the money did come through and if he did use it to enter Bollywood, he would direct some of his eventual fortune towards the enterprise for which he had sought the loan. Of course, when the money came in a few months later, he was tempted to quickly multiply it before taking off for Mumbai. So he invested it in the stock market and lost every paisa.

In 2014, when I started reporting a book about young Indians in small towns chasing their dreams, I saw my sources as most journalists do: as good and bad people. You get a short time to know people and a shorter word limit to describe them: 500 words for the victim, 300 words for the villain, 200 words for the context. When I started on Dreamers: How Young Indians Are Changing Their World, my brief was to follow a set of characters for at least a year and write around 10,000 words about each of them. That taught me several things. I realized, crucially, that if you are spending that much time with a source, you can’t keep them in their slots. You do a number of things other than talk about relevant topics. You travel with them, eat with them, drink with them, wait with them. You pass time. You don’t know what that takes until you have signed up for it.

In 2015, hanging out with a group of gau rakshaks in rural Haryana, I was armed with the right questions: How they feel about cows? Why they hate Muslims? What it takes to kill a man? I hadn’t anticipated the real challenges, though. I didn’t know how to stop their ganglord from making me his special rajma-chawal for lunch. Sandeep Rana doesn’t talk to women—at least not one on one—so he called his wife and young daughter over to his base camp to flank me, and since they get to spend so little time with him, he had decided to play family man for the day.

After he spent the whole afternoon chopping onions and tomatoes, slow-cooking his rajma, and running between the kitchen and our cot to make sure our plates remained piled up, Rana decided he was going to take us sightseeing. He had taken his family out only once or twice. Determined to make up for it now, he started his old Maruti, ordered us to get in, and drove us to his “personal” bank of the Yamuna, where the husband and wife told me funny stories about each other while his assistant shot candid photographs of our group against the clean blue water. 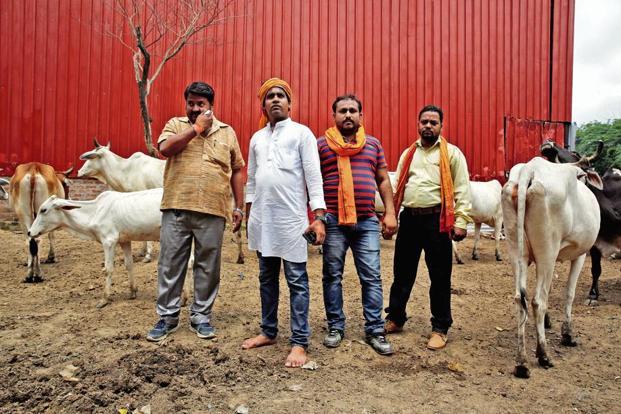 ‘Gau rakshaks’ with cows they claim to have saved in Agra. Photo: Reuters

This wasn’t the most unexpected event of the day. That came at midnight, when Rana left me in the care of a flunky in a double-locked car while he and his gang searched trucks and trailers for any sight of cattle on a highway between Haryana and Uttar Pradesh. The young gau rakshak and I had no option but to pass time. We quickly ran out of things to talk about. While Rana and gang were causing mayhem outside, his hoodlum and I first went through his Facebook timeline and then his selfie collection . Finally, he asked me if we should listen to music. I agreed. He said he was going to play me his favourite song from his teens. It was from a Shah Rukh Khan-Madhuri Dixit film and the words went, Dil toh pagal hai, dil deewana hai (The heart is crazy, the heart is mad). He asked me if I liked it. I said yes. I wondered if I should tell him it was my favourite song from that era too. Then I decided not to.

Apart from the merit of staying quiet when the occasion demanded, working on Dreamers taught me other reporting lessons too. I left the futile pursuit of journalistic invisibility. It was hard for the only young woman in crowd after crowd of young men in rural India to try be invisible. I also gave up worrying if my presence was influencing the actions of those I was following . I got better at differentiating between things people did for real and for effect. I learnt to go with the flow.

In 2017, when I encountered young call-centre scammers in Gurugram, I could understand why they make a living out of cheating vulnerable strangers in faraway countries. Instead of starting out by asking the scammers why they do what they do, I showed up as an anxious job-seeker in the entry-level job market. Making rounds of sketchy placement agencies in Delhi, where young people show up from all over north India to find call-centre jobs, I became good at answering questions: Fresher? Yes. Hindi or English? English. Domestic or international? International. Day shift or night shift? Night shift. Salary expectation? Rs12,000 in hand.

Or that’s what I thought. So, at the end of four months and multiple interviews, when I failed to get a job, even at a con call centre, I felt the way large sections of young Indians do every day: hopeless. What Manufacturers and Companies Can Do to Protect the Environment

Safety at work and its reputational impact