New Delhi: In the end, politics defined the economics of the Union Budget 2018.

It was undoubtedly a ‘Big Spend’ budget of Rs24.42 trillion with unambiguous political contours and yet contained sufficient flourishes that continue to nudge India towards a market economy and a rules-based regime—walking the fine line between populism and development, as it were, to address popular aspirations. 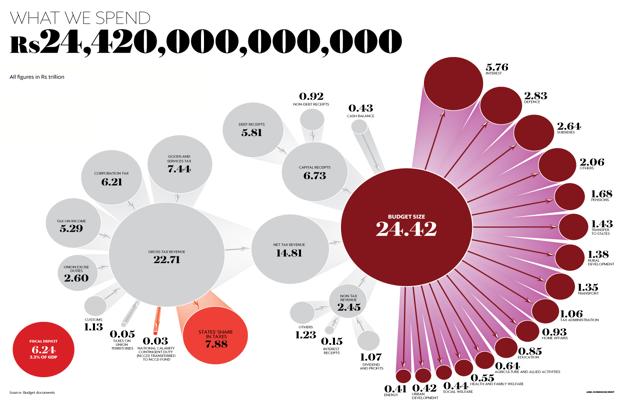 Indeed, this was largely expected, given that the incumbent Bharatiya Janata Party (BJP)-led National Democratic Alliance (NDA) is looking at a re-election bid in a little over 12 months from now and also beginning to feel the pinch of anti-incumbency (as showed by the resounding defeat in three by-polls in Rajasthan on Thursday and the fact that the BJP escaped a similar fate in the recent Gujarat assembly elections). There was, therefore, clearly an urgent need to reset the narrative, which was not only degenerating into vicious political name-calling but also creating potentially explosive social circumstances. Safe to say that this year’s budget speech has set the stage for the BJP to attempt a political makeover.

But what surprised everyone, including the opposition benches in Parliament, was the political craft in the speech; yes, while credit rightfully accrues to finance minister Arun Jaitley, the political acumen and instinct of his boss, Prime Minister Narendra Modi, was more than apparent.

Not only did Jaitley deliver a brisk and aggressive budget speech—his fifth and final one for a full budget—he was careful to structure it in such a way that the political message was more than apparent. The bulk (see The Budget Clock) of the 110-minute speech was devoted to addressing farm distress, the socially disenfranchised, affordable healthcare, improving education and encouraging the small-scale sector (accounting for 72 of the 165 paragraphs of the speech). 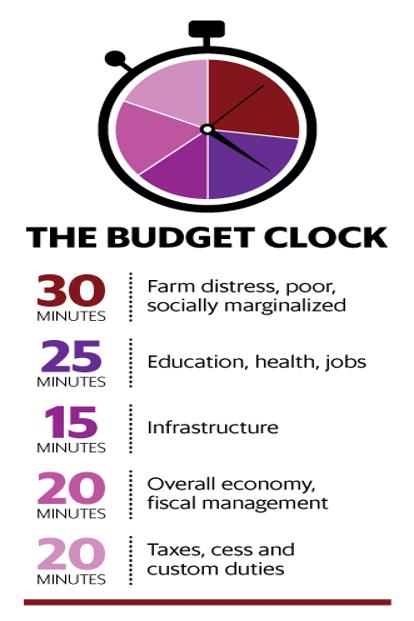 The anti-corruption rhetoric, which has defined most of this government’s tenure, was reiterated by the FM upfront: “There is a premium on honesty (today). There was a time when corruption was commonplace.”

Thereafter, Jaitley devoted his energies to giving form and shape to the gains of nearly four years of Modinomics. Conscious of the fact that most benefits of the structural reforms undertaken by the NDA so far—like the fight against corruption, fixing the bad debt problem by creating an institutional framework, implementation of the goods and services tax—are largely intangible in nature, the metrics of the speech were carefully selected.

Stating that the budget would focus on addressing farm distress, enlarging coverage of healthcare and improving the quality of education, Jaitley said, “Now our government has taken ‘Ease of Doing Business’ further by stress on ‘Ease of Living’ for the common men (and women) of this country, especially for those belonging to poor and middle class of the society.” Very likely this will be the catchphrase of Candidate Modi in the upcoming electoral battles.

Remarkably, Jaitley resisted taking the easy way out by resorting to unbridled populism, preferring instead to stick to the development philosophy defined by empowerment over entitlement (pioneered by the Congress-led United Progressive Alliance).

To address distress in the farm sector, which employs one in two people in the country’s workforce, Jaitley announced a hefty increase in the minimum support price for the upcoming Kharif crop season and at the same time extended this price guarantee to all crops—at the moment it is restricted to select crops such as wheat and rice. The mechanics of this ambitious scheme would be determined by the NITI Aayog, sections of which are rooting for the model adopted in Madhya Pradesh.

The budget also recognized the importance of healthcare, or rather, the lack of it—especially for the poor. Not only does India have a staggering 300-400 million people still living below the poverty line, even those out of it are just one disease away from sinking back into poverty. Worse, non-communicable diseases have surged in recent years.

Accordingly, Jaitley announced an extremely ambitious health insurance scheme that will cover 100 million families living in poverty for up to Rs5 lakh, effectively looking to bring 500 million people under its purview. He described it as ‘Modicare’ (taking off from the popular Obamacare launched by former US President Barack Obama), implying that it has the potential to be a force multiplier for the insurance industry—catering to a market size of 500 million people can be a game changer, as the Jio story in telecom is demonstrating.

In this, the philosophy of this year’s budget is about bringing development to people, not through freebies but instead by creating an enabling environment. A raft of existing schemes targeting the poor such as Ujjwala, providing subsidized cooking gas; Saubhagya, enabling free electricity connections to poor households; and Jan Aushadhi Kendra, providing affordable medicines, got a big push in the budget. The strategy is to make basic development affordable and accessible—thereby creating ‘Ease of Living’, a tangible metric that can be showcased electorally.

Jaitley also went to great lengths to establish the Modi government’s intent on job creation. Not only did he claim from an independent study that 7 million jobs would be created in the formal economy this year, Jaitley incentivised employers by promising to absorb the share of provident fund contribution of new employees for three years.

The emphasis of Jaitley’s budget on the socially and economically disenfranchised was further exaggerated by the lack of any sops for a middle class which has borne the brunt of disruptions triggered by initiatives such as demonetization. To be fair, as the FM explained in a post-budget interview to Doordarshan, the giveaways have to be seen as a summation of what he has extended in his previous four budgets.

Again, Jaitley held out his tax stick for high net worth foreign companies such as Facebook and Google, which operate in the digital space. A provision in the Finance Bill requires these companies, which earn revenues on the rapidly growing Indian online consumer base, to pay corporate tax.

Instead, the corporate tax concessions were reserved for the small-scale sector, which the FM termed a “major engine of growth and employment”. The sub-text is a favourable nudge to formalization of the economy.

And then, of course, the decision to bring back a long-term capital gains tax was another signal that a free lunch is no longer on and some portion of the gains have to be shared with the national exchequer—to fund development programmes.

For Jaitley, who in each of his budgets has pioneered one signature structural reform, this year’s essay was the best way to sign off.livemint