Every year when the finance minister is giving the Budget speech, stocks begin to react based on announcements. The moment there’s an increase in outlay for irrigation, shares of pipe manufacturers and other allied industries start rising. The same goes for announcements related to fertiliser or the education sector. But a few days later, the same stocks suffer. The reason: the fine print might be quite different from the announcements.

For example: In a United Progressive Alliance (UPA) Budget, the finance minister announced a significant increase in education outlay. There was an immediate rush to buy listed education company stocks. Only later did the realisation dawn that the government’s spending would be directed more towards anganwadis and government-run schools.

Such movement is reflected in the broad market, too. If you look at the S&P BSE Sensex since 2008, of the 13 Budgets (a few were only vote on account due to general elections), the index closed in the red eight times. Of the five times it closed on a positive note, the highest gain was 1.8 per cent. “Many react to the announcement in the Budget speech. But when the Finance Bill comes out later in the day, clarity emerges on the actual impact of the announcement on companies,” says Brijesh Parnami, executive director and chief executive officer (CEO), Essel Wealth Services. He also points out that most major government reforms, like the Goods and Services Tax, now happen outside the Budget.

Investment advisors, therefore, suggest that before an individual buys a stock based on Budget announcements, he should analyse and understand how the stock will be impacted.

It’s not easy anymore: In the past, it was easier to take a call on stocks during Budget if an individual kept a tab on economic developments. Analysts say that the Economic Survey released before the Budget would talk about the state of the economy and the direction in which the government planned to take it. Analysts could anticipate announcements based on the information provided in the Survey and buy stocks during the finance minister’s announcement. But over the past five years or so, the Survey no longer contains any specific information that can help punters take calls on stocks.

Forget experts for a day: While there’s a lot of frantic buying and selling on Budget day based on  announcements, there’s rarely complete clarity on the likely impact of these on stocks that very day. There is a lot of information flowing about on Budget day on the impact of announcements on sectors and companies. But, unless you have done your analysis, avoid buying.

Even seasoned investors and analysts take up to a day to make complete sense of the announcements. Investors should, therefore, wait for a day or two until there’s complete clarity on the government’s policy decisions. By the time an investor understands the impact on a sector or company, it is possible the stock may be up a few per cent and he would end up paying a premium. But, that’s fine, compared to buying without having complete information, which can lead to loss of money.

Also, ignore the experts giving views while the Budget speech is on and shortly after. Arun Kejriwal, director at KRIS Capital, says that he did a study around four years back of what analysts said immediately after the Budget and a few hours later. “Many of them were contradicting themselves by the evening,” says Kejriwal.

Strategies for Budget day: Many believe that this Budget could be a populist one as there are elections next year. The finance minister may dole out sops and focus more on welfare schemes. “It’s easy to analyse whether the Budget is populist or giving a push to the economy. If an investor feels that it’s a populist Budget, he should sell the mid- and small-cap stocks that he feels are overvalued,”

says G Chokkalingam, founder, Equinomics Research and Advisory. A populist Budget could cause these stocks to rally further, giving  investors a good exit. Many investors have already started booking profits in the mid- and small-cap category. If it’s a populist Budget, there could be a further correction in them.

Many investors keep a trading portfolio and a long-term portfolio. If you are playing the market using funds from the trading portfolio, going contrarian can benefit you. “If there’s a stock with strong fundamentals, I would put a buy order if it corrects over 6-7 per cent and a sell order if it rises in the same proportion. If traders sell the stock, I will accumulate it at a price I am comfortable with, and vice versa,” says Kejriwal.

Look at specific stocks after Budget: A good starting point to look at stocks post Budget would be to adopt a top-down approach, wherein you first check the impact on the sector and then look at which companies within it stand to benefit. Say, if the finance minister announces further sops for affordable housing, there would be an impact on housing finance companies, construction firms and cement manufacturers. If there’s relief in personal taxation, it would mean more money in the hands of people, and it may boost non-discretionary spends. In this case, it could be positive for consumer goods companies and automakers.

Futures and options play: All investment managers unanimously advise both small and seasoned investors against dabbling in derivatives. If an investor thinks he is confident about an announcement which would impact a company’s share price, he should buy in the cash segment. Many have the mentality that at most they will lose the premium if a bet goes wrong, but if it goes right, they will make much more. That’s not the right approach. The consequences of going wrong can be more drastic. As far as regular mutual fund investors go, the simple strategy is to continue investing through systematic investment plans. business-standard. 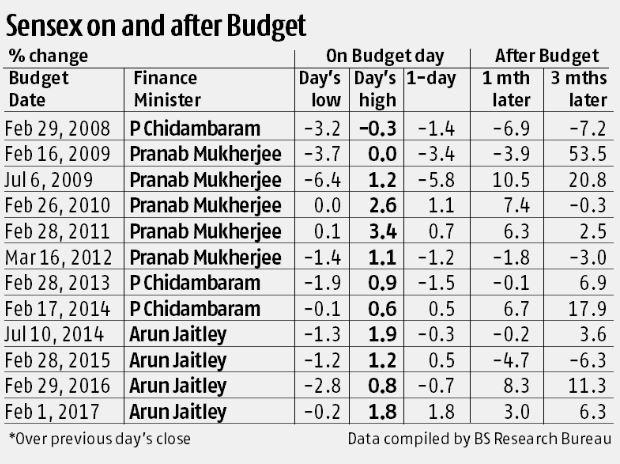