In a speech at the All India Traders Convention on 27 February 2014 ahead of the general election, Bharatiya Janata Party’s prime ministerial candidate Narendra Modi surprised everybody by not playing to the gallery.

“I don’t know whether I will gain politically or not by saying this,” Modi told an audience full of traders, his party’s core vote bank. “Whether you like it or not, we need not be afraid of the global challenges in the business world. We should convert this to opportunity. We should not think that ‘if online trade comes, we will be finished’. You should demand (of) the government how to increase your capability to meet this new global challenge rather than telling the government, ‘shut down online trade’. How will you stop it? We have to accept the modern science and technology. We should not plan to flee, but to fight,” Modi said. 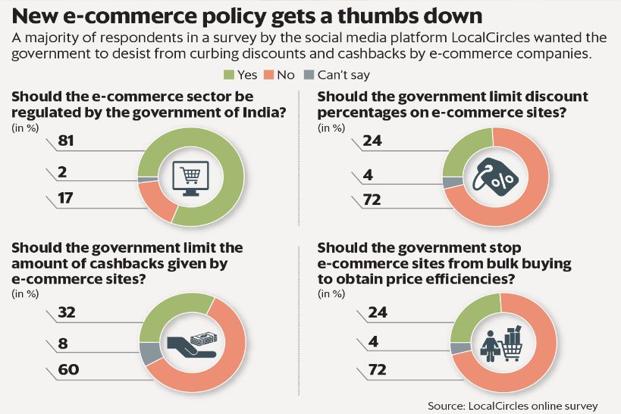 Four years later, after extensively liberalizing retail trade, except allowing foreign direct investment (FDI) in multi-brand retail—which was a 2014 manifesto pledge—Modi is showing signs of nervousness. Poll reverses in recent state assembly elections and a resurgent opposition seem to have forced Modi to cosy up to his original voter base, the traders.

On 26 December, a day after Christmas, while festive sales peaked, the department of industrial policy and promotion (DIPP)—the nodal agency for formulating FDI policy—surprised everybody with fresh regulations that could throw a spanner in India’s thriving e-commerce marketplaces. The Modi government allowed 100% FDI under the e-commerce marketplace model but prohibited FDI in inventory based e-commerce. In the first, e-commerce companies act as platforms for vendors to sell their products and in the second, they can sell their own products.

While the first and second criteria were mandated even earlier, the DIPP always looked the other way when they were violated. The latest changes in the policy are widely believed to be a political move ahead of the general election due in April-May to assuage the trading community which has been hit by demonetization and the implementation of the goods and services tax.

Traders were also miffed with the Modi government’s e-commerce policy, as online trading platforms were harming their businesses by providing deep discounts.

India’s $18-billion e-commerce industry initially thrived in a policy vacuum, aggressively funded by venture capital firms. To legitimize the existing businesses of e-commerce companies operating in India, the government in March 2016 through press note 3 (of 2016 series) allowed 100% FDI in online retail of goods and services under the so-called ‘marketplace model’ through the automatic route and notified new regulations. DIPP through its 26 December notification has now added new stringent regulations to the ones existing in press note 3 of 2016.

While the fresh regulations could spoil plans for greater synergy between Flipkart and its new owner Walmart which operates in the cash-and-carry retail space where 100% FDI is permitted like in e-commerce marketplace entities, it also bars Amazon from selling products from subsidiaries like Cloudtail and Appario where it has significant investments. Cloudtail is a joint venture between Amazon and N.R. Narayana Murthy’s Catamaran Ventures.

The move to ban exclusive deals for products also hurts top online retailers such as Flipkart and Amazon. Flipkart, for instance, has exclusive partnerships with top smartphone brands such as Xiaomi and Oppo. Smartphones make up over 50% of e-commerce sales in India.

A DIPP official speaking under condition of anonymity insisted that press note 3 of 2016 only issues a clarification. “We have not formulated any new policy. We have not even gone to the cabinet for a new policy,” he said. The department is formulating an e-commerce policy, a draft version of which is expected to be released soon, after a similar draft policy by the commerce department was rejected by e-commerce players.

When asked about the motive behind the clarifications, the DIPP official said: “Marketplace should be a pure marketplace. We hope these steps will ensure establishing a pure marketplace and influencing price will be more difficult,” he added.

An official of an e-commerce company speaking under condition of anonymity said the new regulations are draconian and a bigger retrospective move than even the Vodafone tax issue. “It will not only impact e-commerce sector but also FDI inflow in other sectors because regulations can change overnight. The ecosystem is seeking more time for implementation. Under the current political scenario, we don’t expect a review of the regulations immediately. We will have to wait till the election season is over,” the official added.

CNH Industrial India certified as a 2020 Great Place to Work