What do Indians think of its politicians? What are the major issues they care about? How have these views changed over time? These questions can be difficult to answer but one tool, used increasingly by social scientists to answer questions such as these, is Google Trends. A Mint analysis of Indian political Google Trends data, for instance, shows that, in terms of search interest, Prime Minister Narendra Modi is the most popular national leader and Mayawati enjoys the widest appeal among regional leaders, while jobs is the most dominant issue.

What Google reveals about search interest in Indian politics

Google Trends-based analysis are increasingly relevant for India because of the meteoric rise in internet access. For instance, over the last five years, the number of internet connections has increased by nearly 200 million to 512 million, according to data from Telecom Regulatory Authority of India (Trai).

According to Pew Research Centre data, 25% of Indian adults had access to internet/smartphones as of 2017, up from 16% in 2013. These internet users spend a significant time on Google. The search engine is the most visited site in India and, Alexa, a web traffic analysis company, estimates that Indian users spend an average of 14 minutes daily on it.

Given its ubiquity, data from the world’s largest search engine can be a powerful way to reveal people’s interests and passions. For any search term, over any given period, in any given region in the world, Google Trends data quantifies the term’s search interest. Search interest in Narendra Modi, broadly mirrors his political career: Gradually increasing over time and peaking on two occasions. First, when he was elected as the prime minister in May 2014 and second during demonetisation.

Comparing Modi with Rahul Gandhi demonstrates Modi’s ascent better. Until 2012, Indians were googling Narendra Modi and Rahul Gandhi equally, but since then Modi has surged ahead. 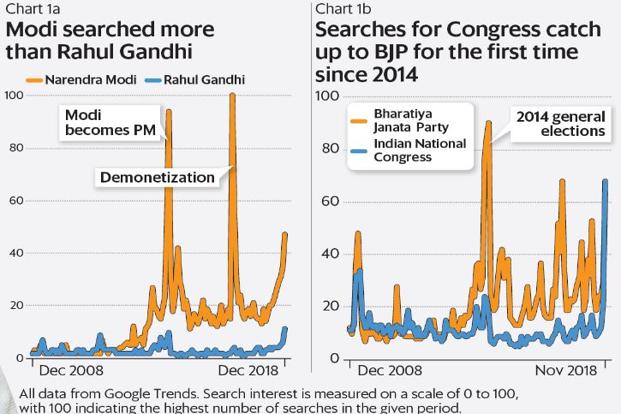 The Modi-Gandhi pattern is replicated for their parties. Bharatiya Janata Party (BJP) is searched more after 2012, but following these recent state elections, there has been a surge in interest in the Congress. Within cities, BJP is significantly more searched than the Congress with the gap largest in Lucknow, Chennai and Guwahati. These political Google searches are also taking a new form. Increasingly, common queries to Gandhi/Modi/BJP/Congress searches are in Hindi. 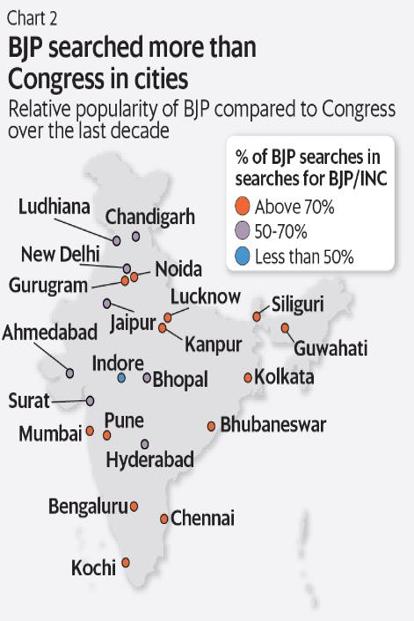 Outside India, Narendra Modi is searched most in Nepal, Bhutan, the Middle East and, surprisingly, Bolivia. Among the top 20 most populous nations, globally, he is the second most Googled national leader.

Over the last 12 months, Modi has been searched more than Vladimir Putin and Angela Merkel, but significantly less than Donald Trump. 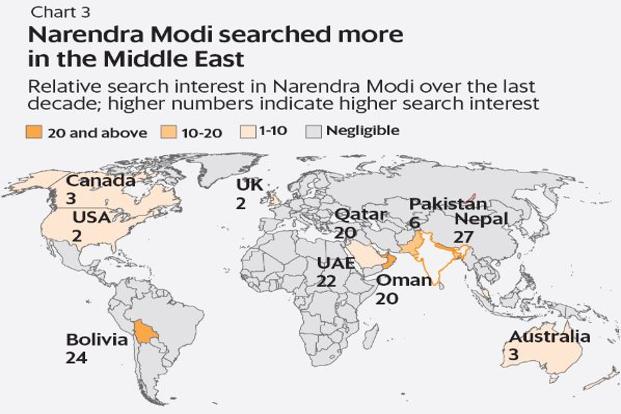 Modi’s search popularity is a reflection of his position as India’s prime minister, but what of his potential replacements? The talk of a Mahagathbandhan to battle the BJP raises the prospects of a state leader in the prime minister’s position. But which state leader generates the greatest interest nationally?

According to Google Trends data, of the prominent state leaders—Mayawati, Nitish Kumar, Mamata Banerjee, Chandrababu Naidu and K. Chadrashekar Rao (KCR)—only Mayawati and Kumar generate interest outside their regions. Over the last year, KCR has been the most searched state leader, helped by his recent election win, but these searches are restricted to states in the south, and concentrated in Hyderabad. In contrast, Mayawati’s name is searched across north India and is the most searched leader in Indore, Delhi and Pune. Nitish Kumar follows Mayawati in nationwide appeal and searches are popular as far as Ludhiana and Surat. 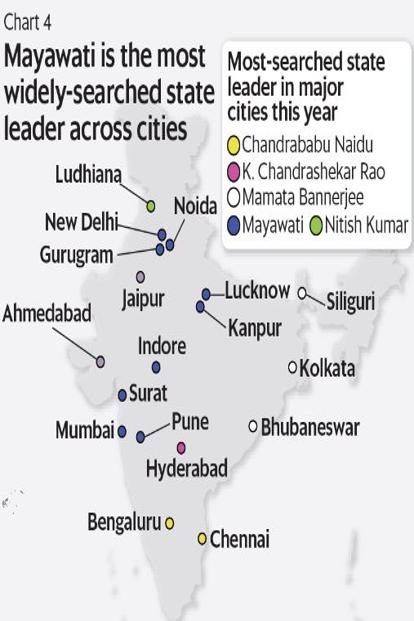 Yet more than state leaders, the general elections could be decided on issues. Here, Google suggests India’s biggest issue is jobs. More than education, pollution, caste, or the Ram mandir, queries for jobs and especially government jobs, dominate India’s Google searches over the last two years.

However, while jobs may be the dominant issue in the voters’ minds, a more practical issue could be registering to vote. Analysing queries for the term “voter registration” over the last five years, we, unsurprisingly, find that searches peaked ahead of the 2014 general elections. A significant portion of these searches come from erstwhile Andhra Pradesh, perhaps a result of queries over voter registration ahead of the state’s bifurcation. Ignoring results from Andhra Pradesh, we find that in 11 of the 12 cities with significant searches for “voter registration”, voter turnout increased between the 2009 and 2014 elections. 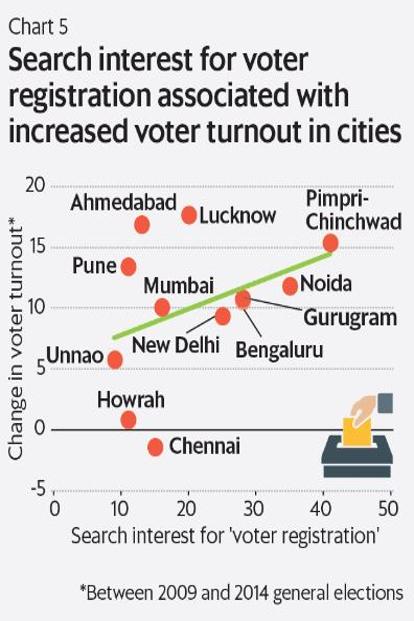 Similar searches ahead of 2019 Lok Sabha elections could perhaps give us a clue about cities that are likely to witness higher turnout.