A day after the Congress and several other Opposition parties alleged that it had lied in the Supreme Court, the government on Saturday moved the court, seeking correction in a paragraph of its judgment in the Rafale deal case.

The government’s submission, recorded under paragraph 25 of the judgment, had stated that the pricing details were shared with the Comptroller and Auditor General and that the report was examined by the Public Accounts Committee (PAC).

The Centre said the error in the court’s judgment was “perhaps on account of misinterpretation of a couple of sentences in a note” that was handed over to it in a sealed cover. “The observations in the judgment have resulted in a controversy in public domain, and would warrant correction by the court in the interest of justice,” the government said in its application to the court.

The apex court had on Friday said there was “no occasion to really doubt” the procurement process of 36 Rafale fighter jets “even if minor deviations have occurred”. It had also said there was no reason as to why the court should intervene in “the sensitive issue of the purchase of 36 defence aircraft by the Indian government”.

The court had refused to go into the details of pricing of the aircraft. The court’s observation that the details had been shared with the CAG and examined by the PAC created a controversy after PAC Chairman and Congress leader Mallikarjun Kharge denied any knowledge of the same.

Other than the pricing, the top court had on Friday also refused to go into the details of the number of aircraft being bought and the choice of the Indian offset partner.

The SC had said it was “neither appropriate nor within the experience of this court to step into this arena of what is technically feasible or not”.

Though the order came as a relief to the National Democratic Alliance government, which asserted that its stand had been vindicated, the opposition remained firm in its demand for a Joint Parliamentary Committee inquiry — something which the government has already rejected. 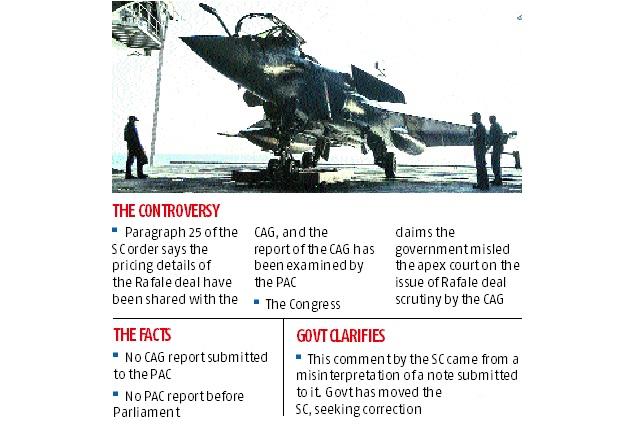 NRIs in Hongkong Came in Support of CAA