New Delhi: Amazon.com Inc. CEO Jeff Bezos had five years ago envisioned a future with an armada of drones that will deliver packages at your doorstep. Since that bold prediction, drones have rapidly evolved with better features, specifications, and precision. From agriculture to defence, drones have found their applications in a variety of sectors.

In India, drones have finally inched closer to commercialization in 2018 with ‘Drone Regulations 2.0’ policy, which is considered to be a landmark for the technology. From taxis to delivery vehicles, the latest policy paves way for a range of futuristic applications. The regulations are expected to come into effect in March 2019.

In a larger scheme of things, food delivery via drones may not appear as the most groundbreaking application of the technology. But if you think about it, the segment can very well usher in the era of drones in India.

One of the first efforts towards using drones for commercial deliveries is being made by Zomato (Zomato India Pvt. Ltd), which recently acquired a Lucknow-based start-up TechEagle Innovations. The acquisition has already triggered hopes for drone delivery in the country. 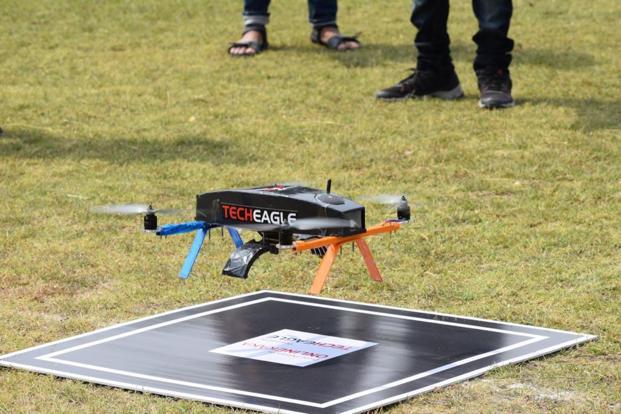 “While we are at a nascent stage, we believe that drones powering last-mile delivery is an inevitable part of the future. The factors which crippled the sector in the past years are now in favour its development, said a Zomato spokesperson when asked about the prospects of drone delivery in India. “So, with the right set of people, favourable government regulations and aerial technological advancements, drone delivery will be a game changer in the food delivery space.”

Zomato says it is working on devising hub-to-hub delivery networks and designing multi-rotor drones that can pick up a payload of under 5kg. The company will soon run a pilot in Delhi NCR and eventually scale it to other cities.

Zomato is also confident that its drone technology will be able to address the geographical challenges that India poses—for instance, the complex address system or delivery venue located in a narrow lane.

“We live in a world of advanced infrastructure and technologies such as artificial intelligence, robotics and Internet of Things (IoT). Drones are designed to perform tasks with accuracy keeping in check Indian geographies and infrastructure. In fact, urban infrastructure will play a significant role in the first phase of our hub-to-hub model in a high-frequency area,” the Zomato spokesperson explained.

Zomato’s drone delivery system will be completely automated with “minimal on ground supervision”. The initial version of the system will use some human intervention as delivery is only destined for hub-to-hub but eventually will be able to deliver food directly at a doorstep.

“We are also developing a collision-avoiding system with 360-degree sensors that will sense any obstacle, such as a bird or another drone, at 50 metres distance and change the course accordingly for a smooth delivery,” added the company spokesperson.

Drones in India: Opportunities and challenges

Apart from recreational purposes, drones are believed to be highly useful technological disruption for India with valuable applications in agriculture, commercial, industrial and military requirements.

According to Rajan Aiyer, managing director at B2B technology provider Trimble Navigation India, there are a number of potential applications for unmanned aerial vehicles (UAVs), or drones, in India.

“The primary sectors would be where the core idea is derivation of useful information with a smart camera floating in the sky. Sectors such as geospatial and agriculture aside, drones can have a meaningful impact on construction too. Drones can be used for monitoring large sites, dams, bridges, etc., and used to film progress and safety on various construction sites. They can also be used for monitoring remote sites in domains like mines, oil pipelines etc,” said Aiyer.

“Other applications include crop count in agriculture, land and property surveying and even search and rescue operations. Recently, one of the leading e-commerce giants also adopted drone technology to deliver shipments, and we can expect drone deliveries to get popular in time to come,” he added.

Rajan Sachdeva, partner and leader (EMEIA Technology and Digital) at EY India, said: “Drones can play a key role in surveillance related activities and can be utilized for emergency response, crowd monitoring and security planning for police and other surveillance entities.

“They can also be used for enabling, detecting, maintenance requirements and failure analysis of assets like power transmission lines, particularly in the space of oil & gas and solar renewable energy.

“Drones also enable use cases like delivery—right from pizzas to critical organs for hospitals or medicines to disaster affected areas. The list of potential drone use cases are large and today we are just scratching the surface in terms of our current adoption of technology,” Sachdeva added.

Road to a robust drone ecosystem in India is not without challenges, though.

Ajay Gupta, partner (communications, media and technology practice), at AT Kearney India, pointed out that privacy will be a key challenge.

“Ease of registration and permits will be another. Overall safety will need to be paramount, and a lack of a well thought through approach can put brakes early on,” he said.

Aiyer of Trimble India added, “Considering the policy has just been action-ed by the government, it is too soon to assess its challenges. The key would lie in effective implementation, wherein we will be able to evaluate the gaps.”

“One of the policy’s unique features is a no permission, no takeoff system for remotely piloted aircraft, that ensures that drones don’t take off without regulatory permissions. This enables trust and security in the user company’s service, since nothing flies without prior approvals,” he added.

“The next challenge would be to enable awareness and education on the boundaries of regulations. It is important to ensure clarity on the use cases which are allowed and the ones which are currently not allowed by the law of the land. The next pressure point would be to ensure that the basic infrastructure for pilot training, testing sites are provided as this will enable responsible and safe use of drones across the sectors,” he said.

Firefox makes choosing your adventure bike an experience to remember!