The gap between wholesale dispatches by automakers and the number of vehicles actually sold by dealers in the run-up to Diwali has been widening steadily for five years, new data shows, exploding the myth that this year’s low sales are a one-off caused by rising crude prices and a liquidity crunch.

Is a festive season sales bump a myth for cars?

The data, published by the Society of Indian Automobile Manufacturers (Siam) and Vahan, the vehicle registration website of the Union government, comes amid an outcry by dealers across the country about the substantial and continuous dumping of inventory by manufacturers even as retail sales decline.

The data indicates that the gap usually narrows after Diwali, in November and December, as manufacturers slow down production during the last month of the calendar year.

The data, accessed by Mint, has allowed a comparison over a timeline because vehicle registration figures, previously held back by the government, have now been released.

According to the data, during the two-month period to Diwali (August and September) in 2014, actual registrations of vehicles at dealers were 67.9% and 61.7% of the total vehicles dispatched by manufacturers. 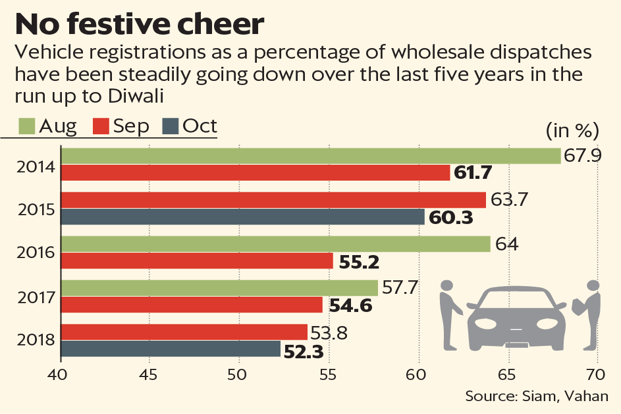 However, when it comes to November and December, the gap narrows significantly to 90% or more.

The data indicates that automobile manufacturers may have failed to predict the extent of the impact of factors such as crude price increases, hikes in vehicle loan rates and the stock market crash on auto sales and, as a result, continued to push inventories in expectation of healthy festive sales.

According to the data, till October this year, vehicle registrations as a proportion of wholesale dispatches never crossed the 80% mark in any of the months.

According to a senior industry executive, auto companies cannot be held responsible for the increasing inventory because production will be adjusted accordingly in the subsequent months if demand is lower than expected.

“Piling up of inventories in the run-up to Diwali is not a very unusual situation as vehicle manufacturers expect almost a third of their sales to take place during the festival period,” said the executive, requesting not to be named.

The liquidity crisis in recent months, especially in the non banking financial companies sector, may have affected dealers’ ability to access loans in order to buy vehicles from auto companies, he said.

On 23 November, the Federation of Automobile Dealers Associations (Fada) said total vehicle registrations declined 11% during the 42-day festive season that ended with Diwali this year as registrations of two-wheelers fell 13% and four-wheelers by 14% during the period. Fada cited the liquidity crunch faced by vehicle financiers as one of the main reasons.

Pointing to the substantial decline in retail sales, Mint on 30 October reported that in October, vehicle registrations declined 17% from the preceding month, despite festivals such as Dussehra. About 1.15 million vehicles were registered until 29 October, showed data from Vahan. Besides, registrations plunged 26.84% in October from a year earlier.

According to Avik Chattopadhayay, founder of the brand consultancy Expereal, vehicle manufacturing companies are to blame as they did not recalibrate their production cycles on a quarterly basis while dealers too have failed to raise a complaint on this practice before.

“Dealers have been complaining this year as other issues have hit them hard. This inventory pile up happens twice a year but a 22% drop in sales was never expected. The companies also give compensation to dealers but usually it comes at the end of the year. In the second quarter usually registrations are around 65-70% of the wholesales,” explained Chattopadhayay.