New Delhi: The release of Sanjay Leela Bhansali’s Padmavati was put off indefinitely by co-producers Viacom18 Motion Pictures on Sunday following massive protests across the country over points of history and a run-in with the Central Board of Film Certification (CBFC). The period saga is the latest in a long list of films that have been opposed by religious, political and other groups over the past decade, prompting obstacles in the run-up to their release.

In the Hindi film category alone, at least 63 films have been opposed by different communities since 2008. The reasons range from religious (action film Singham Returns was accused of depicting Hindu saints in a bad light) and political (Karan Johar’s romantic drama Ae Dil Hai Mushkil was caught in the fire thanks to the presence of Pakistani actor Fawad Khan around the time of the terrorist attack in Jammu and Kashmir last year) to historical (Bhansali’s last project Bajirao Mastani was accused of distorting facts relating to Peshwa Bajirao I and his wives) and community (Ekta Kapoor’s Ek Thi Daayan had supposedly portrayed witches in a negative light, according to a petition filed against the film). 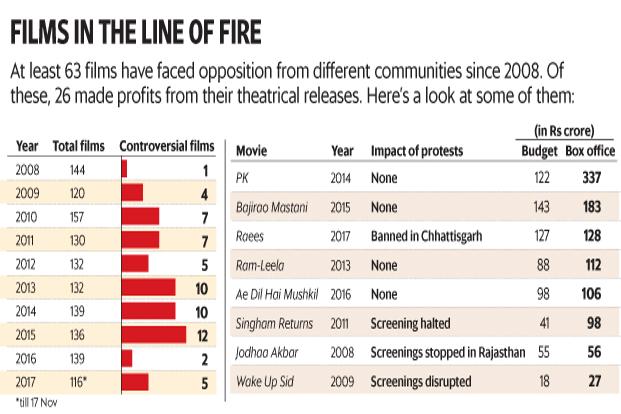 Of the 63, 19 films have faced objections from religious groups, another 19 from political groups, three for allegedly distorting historical details and others from communities. The number of films that walked the tough path to a theatrical release was the highest in 2015 (12 out of a total of 136 film releases) followed by 2014 and 2013 (10 each out of 139 and 132, respectively). The list does not include films that faced censor trouble, a different burning issue altogether.

“Let’s accept that making historical and political films is a problem in India,” said filmmaker Madhur Bhandarkar, who refers to his four-month old experience with Indu Sarkar as a nightmare. Indu Sarkar is a take on India’s 1975 Emergency period that released in July this year. So much of Bhandarkar’s time was taken up in attending Supreme Court sessions and convincing theatre owners to screen his film, that he couldn’t get his prints censored in time for an overseas territory release and lost out on much revenue from abroad.

On the day of release, cinemas in Maharashtra were attacked.

“Cinema is definitely a soft target and this has been happening for very long. The point is everybody has the right to protest and they should, in a democracy. But threats like cutting off somebody’s nose or beheading someone are wrong because we are creative people, we are here to make films and entertain audiences. We respect the right to protest but there is a legitimate way to do so as well,” Bhandarkar said.

No other medium has the power to influence public consciousness like cinema, added scriptwriter Apurva Asrani. “Naturally, many are threatened by it and therefore try to control it. Also, attacking film folk is the easiest and cheapest way to garner publicity for any fringe group,” he said.

Director Rahul Dholakia, whose Shah Rukh Khan-starrer Raees was caught in the fire because lead actor Mahira Khan is a Pakistani, said the bigger the film and the actors, the easier the target. Four months after the release of Raees, nobody cared that another Bollywood film, Hindi Medium, also had a Pakistani lead actor, Saba Qamar. 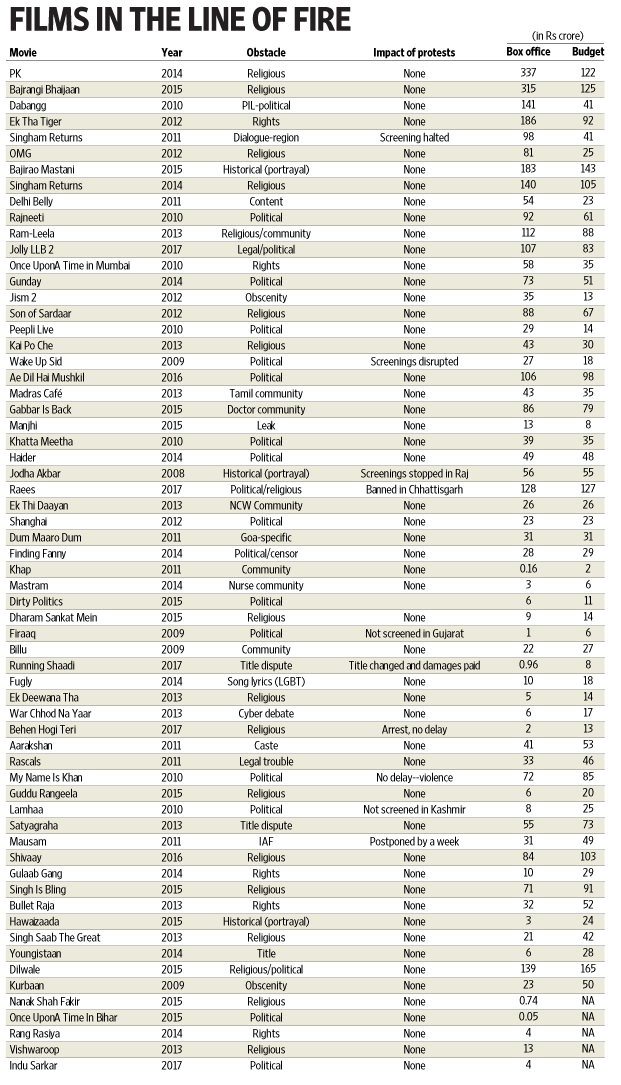 A lot of it has to do with the ample space provided to such voices of dissent, Dholakia said. From print to television to digital and social media platforms, the means and platforms for expression are countless. “Right now, it’s Padmavati but it’s happening to every film. We tend to make a noise about anything; anybody and everybody is getting oversensitive because their voices and faces are being shown on media,” Dholakia pointed out.

“All those who believe any publicity is good publicity need to realise the kind of stress it means for a film director and producer. Nobody wants this nuisance,” he said.

Bhandarkar pointed out that while the government can provide security, no theatre owner wants to take the risk to run a screening likely to be disrupted. And viewers won’t want to spend Rs300-400, only to get caught in a stampede with family and children.

Apart from Padmavati, Shahid Kapoor’s Mausam was delayed after the Indian Air Force suggested changes. Nine others, including My Name Is Khan and Jodhaa Akbar, had screenings disrupted.

Still, Padmavati’s prospects are bright whenever it does hit the screens. Out of the 63 controversial films in the past decade, 26 made clear profits from their theatrical runs—ranging from the Rs1 crore made by Vishal Bharadwaj’s Haider to the Rs215 crore earned by Aamir Khan’s PK. Six doubled their investment or more.

“A controversy definitely raises the curiosity around a film,” said Atul Mohan, editor of trade magazine Complete Cinema. “The general feeling is one must catch it lest it’s pulled down and also to know what the big deal is. I wouldn’t be surprised if Padmavati gets a wide release and its day one numbers are historic.”