Delhi to Patna by road in just 11 hours? Sounds impossible, doesn’t it? But that might soon be reality after the central government’s plan to extend a corridor is implemented.
The Narendra Modi-led government at the Centre is collaborating with the Uttar Pradesh and Bihar governments to slash the travel time between the national capital Delhi and Bihar capital Patna by 2019, when the next Lok Sabha elections will take place, according to a report in the Economic Times.
At present, it takes roughly 18 hours to travel from Delhi to Patna. The journey was even longer before the Agra-Lucknow expressway was built. Now, the government is planning to create an economic corridor on the lines of the Delhi-Mumbai industrial corridor.
Currently, the Agra-Lucknow expressway gets a lot of traffic around Diwali, when the air fare is very high, says the ET report . The central government and the two states are to join forces to help implement the plan. The move could not only make travel between the two politically crucial states easier and quicker but also prove useful in the general elections.
“This is a very positive step… we expect the road journey from Delhi to Patna to be done in about 11 hours flat once the whole plan complete with ring roads and expressways is executed… expressways will attract big traffic,” the ET report quoted Awanish K Awasthi, the CEO of UP Expressways Industrial Development Authority, as saying. 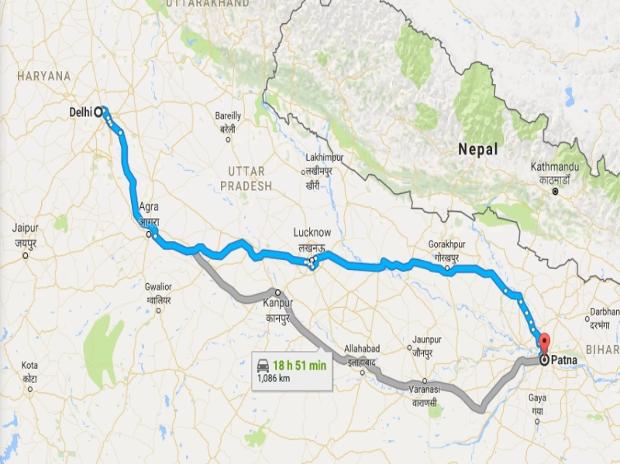