New Delhi: Complex regulations at the municipal level in Delhi and Mumbai on parameters such as starting a business, dealing with construction permits and registering property continue to dog India’s ease of doing business rankings.

This, despite India jumping 30 positions to 100th place among 190 countries in the latest edition of the rankings released on Tuesday by the World Bank, based on field surveys and interviews with corporate lawyers and company executives in Delhi and Mumbai. 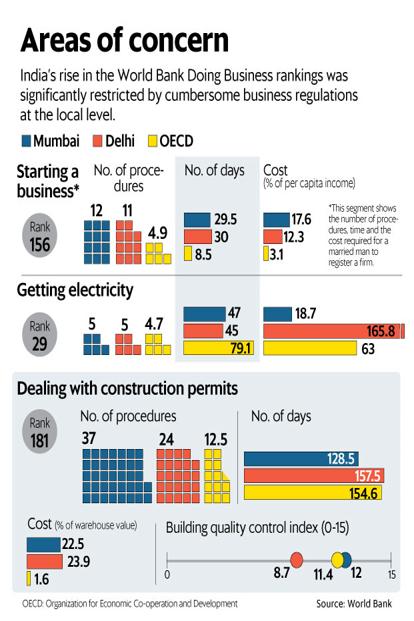 With a weightage of 53% and 47% respectively, the bank takes these two cities to be representative samples for India.

For example, the bank notes that though India has reduced the time needed to register a new business to 30 days now, from 127 days 15 years ago, the number of procedures is still cumbersome for local entrepreneurs who need to go through 12 to start a business in Mumbai against 11 in New Delhi.

This is considerably higher than high-income countries where it takes five procedures on average. Though central regulations such as the Companies Act, 2013, play a major role in starting a business, state and local level regulations have played a role in India’s dip in rankings in this parameter to 156.

Though India’s ranking in dealing with construction permits improved by four positions to 181, the parameter remained the country’s Achilles heel.

The number of procedures in applying for a construction permit varied widely in Delhi (24) and Mumbai (37), way above 12.5 required in developed countries. It also requires more time to get the permit in Delhi (157.5 days) than in Mumbai (128.5 days).

“This reduces cost and eliminates corruption. In many cases in Delhi, it has been done,” he added.

Jaitley said India is far behind on this front in the world and these reforms need to be carried out at the local level in states.

“We are going to request the states to expedite municipal construction permits,” he added.

Though in getting an electricity connection, India has a decent rank of 29 even after a drop from last year’s ranking of 26, there is a significant difference in cost of getting a connection between Delhi and Mumbai with scope for further improvement.

Measured as a percentage of per capita income, cost of getting an electricity connection in Mumbai is 18.7% while in Delhi it is 165.8% against an average of 63% in most developed countries.

India saw its steepest fall in ranking in “registering property”, to 154 from 138 last year as the number of procedures, time and cost increased.

The cost of registering a property as a percentage of property value in Delhi (9.1%) is higher than Mumbai (7.6%) as against 4.2% in developed countries.

Industry secretary Ramesh Abhishek said India had claimed before the World Bank to have carried out 42 reforms in “registering property” while the Bank has acknowledged only two reforms fully and two partially. “There is a big backlog. We will keep working with the stakeholders so that these reforms are accepted on the ground,” he added.

Gautam Mehra, partner at PricewaterhouseCoopers India, said the problem is that neither the centre nor the state government has direct control over municipalities to force them to carry out the necessary business reforms.

“Municipalities, especially in Delhi and Mumbai where the World Bank survey is carried out, need to be prodded through incentives and pressure to carry out the intended reforms,” he added.