They are inducted as additional directors, and their appointments will be formally ratified by the EGM. The four members are expected to attend the next board meeting. Karnataka Industries and Infrastructure Minister RV Deshpande confirmed the developments, and said the present management, led by Hyderabad-based GVK Group, will continue to look after operations for some more time.

“Watsa told me that he wants to make Bengaluru international airport among the best in the world. Now that they are on board, they will be more aggressive,” he said.

A member of the Fairfax Group, not wanting to be identified, said the international airport at Bengaluru is the biggest entry and exit point in South India, and the new investors are keen to pursue capital expenditure plans to both increase the airport’s capacity and its efficiency. 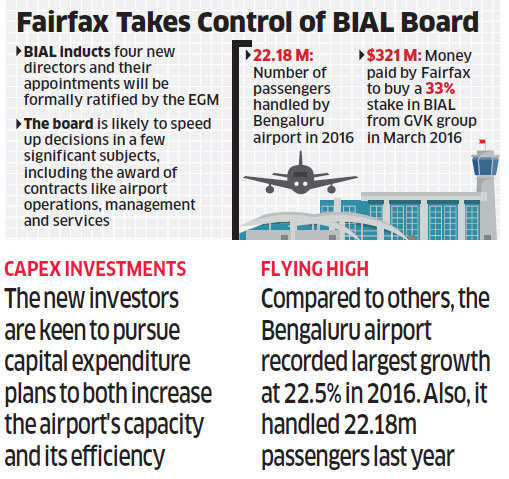 Even with the existing capacity, the new investors think there is a lot of scope to improve the efficiency.

Traffic volumes at BIAL have been shooting up, calling for speedy addition of a second terminal. The Bengaluru airport recorded the largest growth at 22.5% in 2016 compared to other large Indian airports. Last year, the airport handled 22.18 million passengers.

“Fairfax is a globally renowned group which pursues its investments with a long term vision,” said DV Prasad, Additional Chief Secretary, Infrastructure Development Department, and a BIAL board member.

“They (Fairfax) will not only accelerate pending works, but will also surely draw out a proper perspective plan for the overall development of the airport with a medium to long term vision,” he said.

The board is likely to speed up decisions in a few significant subjects, including the award of contracts like airport operations, management and services.

“They (Watsa) are interested in many projects in Karnataka. They are discussing with us about building a convention centre (at the airport),” said Deshpande.

Watsa’s Fairfax Group had, in March last year, announced its decision to buy a 33% stake in BIAL from GVK Group for Rs 2,182 crore ($321million), valuing the eight-year-old airport at about Rs 6,600 crore.

A month later, Fairfax signed another deal to buy a 5% stake held by Flughafen Zurich AG in BIAL. The entry of Fairfax does not mean infusion of any fresh funds as equity into airport development, according to government officials.

Since the Union Government and Karnataka hold 13% stake each in BIAL through their respective investment vehicles, no private stakeholder can invest fresh equity without altering the shareholding pattern. The Centre or the State governments have no plans to invest any equity.

The Phase II of the airport development, officials said, is going to be funded only with borrowings and internal accruals. It is to be seen if the Canadian investors would explore innovative financing options that can reduce BIAL’s cost of funds. All along, BIAL has been borrowing from banks.

Fairfax Group holds controlling stakes in Thomas Cook (India) and Quess Corp, and its investment in BIAL marks its entry into the infrastructure sector. This is Watsa’s second investment in Karnataka. His investments in Quess have returned his group bumper returns.