NEW DELHI|MUMBAI: Leading Indian generic drug makers LupinBSE 0.07 %, CiplaBSE -0.95 %, Zydus Cadila and Sun are eyeing to acquire the respiratory drugs portfolio of Novartis AG that the Swiss giant is seeking to divest, said people directly aware of the matter. The portfolio of brands on offer could fetch as much as $500 million in a sale, they said.

The Novartis portfolio includes top-selling brand TOBI Podhaler, a drug prescribed for symptomatic relief to patients suffering from cystic fibrosis, a genetic lung disorder. The interest from the Indian companies is preliminary and no firm offers have been made, cautioned the people quoted earlier.

The brands are sold in as many as 60 countries by Novartis. TOBI Podhaler alone is said to have annual global sales of $300 million. The Indian companies may also face competition from a couple of large global pharmaceutical companies as well. 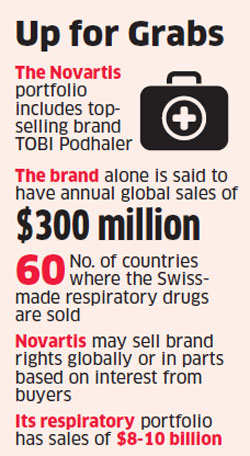 A Novartis spokesperson declined to comment when contacted by ET, while spokespersons for Zydus Cadila, Sun, Lupin and Cipla were unavailable for comments. Novartis may be open to selling rights for the brands regionally if offers for the entire portfolio are not attractive enough, said the people quoted above. It may provide suitors the option of purchasing brand rights in certain countries or a cluster of countries.

The winning suitor may have to agree to source the products from Novartis for a specified period of time before they can sub-contract manufacturing to a third party, according to people in the know.

The global branded inhaler market is estimated to be over $700 million in sales and projected to touch $3.4 billion by 2024, according to estimates by market research firm Report Buyer.
Indian generic makers have been looking to beef up their respiratory drugs portfolio in Europe and North America as pure branded and speciality products are likely to be the next big revenue generators for these companies. Drug makers like Lupin and Cipla which have been historically strong in the respiratory drugs markets are taking these strength outside their home countries.

Lupin, which has been looking for acquisition opportunities in the respiratory segment, is also reported to be in talks with Sanofi to acquire respiratory drugs from its generics division Zentiva. It also has a tie-up with Polish firm Celon for developing dry powder inhalers.

The respiratory segment globally is dominated by Metered Dose Inhalers, with companies like Novartis and GSK cornering a large chunk of this market. The dry powder inhaler segment, a relatively newer product, is expected to grow at 16%.

Indian drug makers have been pursuing M&A opportunities in North America and Europe. Last year, companies like Sun, Aurobindo and Intas led outbound M&A in the pharma sector with key product and company acquisitions. Sun PharmaBSE 0.25 % acquired anti-cancer drug Odomzo from Novartis to take on Roche in the skin cancer drug segment. Sun Pharma paid $175 million for global rights to market Odomzo, which had sales of about $21million.

Indian companies have also been acquiring brands of global pharma companies sold in India. Strides Arcolab bought a portfolio of brands from Johnson & Johnson (J&J), while Dr. Reddy’s Labs acquired a few brands from Belgiumbased UCB in India. Torrent Pharma is also said to be in talks to buy some of Novartis’ brands in India.

The report found that in terms of disclosed deal value, outbound and inbound activity stood at $2.1 billion each. Domestic deal-making was concentrated in smaller value bands with an aggregate deal value of $342 million, of which $272 million (4 deals) worth of deals were restructuring ones.