MUMBAI: In a landmark agreement signed with Pune plant workers on Tuesday, Tata MotorsBSE -0.31 %, India’s largest automobile company by revenues, has initiated a move to bring 15-20,000 blue collar factory workers to a wage structure that is performance-linked.

The company concluded a long-term wage settlement agreement with its Pune workers Union that covers 6,400 workers, after 19 months of negotiations. Tata Motors will now work towards getting workers from Sanand, Lucknow and Jamshedpur factories to sign a similar agreement.

According to a few people in the know, about 10% of the Pune plant workers salary is variable pay and is linked to the performance. The wage settlement for Pune plant workers has been signed for a period of 3 years —September 01, 2015 to August 31, 2018. The agreement will be effective from immediate effect. The total wage package is bifurcated as: a fixed rise of Rs 8,600 (in the ratio of 72%, 15% and 13% for a period of 3 years) and Rs 8,700 non-actual; that is a total of Rs 17300, said the company statement.

Guenter Butshcek, MD of Tata Motors told ET: “Here is a clear scheme, as far as performance-based rewards are concerned, just like how it translates for the management or white collar executives, in the same way, the company is introducing performance linked pay for blue collar workers.” 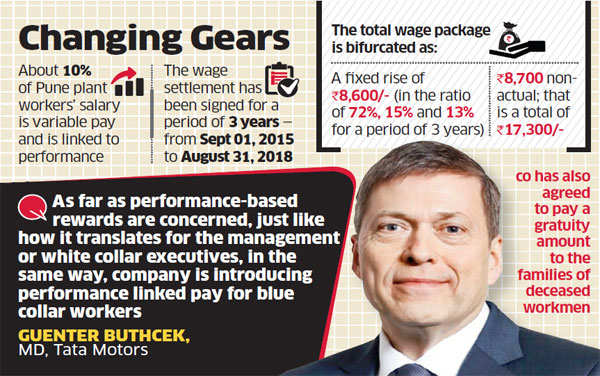 Tata Motors has manufacturing plants in Sanand, Jamshedpur and Lucknow too, and a similar wage agreement will be offered to them, as well.

“There is no doubt, what has been signed in Pune is going to be a reference point for what needs to be signed at other plant locations. It is not going to be identical, because, in other locations, we negotiate in advance, here we are running retrospective negotiations.”

In addition to the increment amount, the company has also agreed to pay a gratuity amount to the families of deceased workmen and a wrist watch be given to the spouse of an employee on the completion of 25 years of service. Additionally, various other facilities were agreed upon, including block closure days being increased by 6 days.

The new measurement of performance has been well received by workmen, says Tata Motors.