With the mandatory spending on corporate social responsibility (CSR) reduced to just another ineffectual piece of legislation, a mindset change that entails looking at CSR as an opportunity for growth is emerging as the change agent in India.

Panellists at an event in New Delhi to launch Oslo-based consulting firm Xynteo’s new report Leading Out discussed the ways their companies are focusing on the pressing issues in society.

Whether it is the need for clean drinking water or roads or inexpensive housing or even broadband access in the remotest parts of the country, the Sustainable Development Goals adopted in 2015 by the United Nations, are now becoming the fulcrum for emerging growth markets.

As Sanjeev Mehta, chief executive (CEO) and managing director (South Asia) at Hindustan Unilever Ltd, said, “Companies start with charity, then they open educational institutions, then espouse causes related to marketing, and then CSR. What we are trying to achieve is work towards societal good and reducing the environmental footprint, not that something you superimpose on the business—that’s the subtle difference.”

Mehta agreed with Xynteo chairman and CEO Osvald Bjelland, who said upfront that companies need to reinvent their growth model. The serial entrepreneur said it had been his second nature from early in his career to focus on economic growth married to human needs.

He emphasized the fact that the key to this is committed leadership, and it is the quality of the leader, his purpose and morality that is very important. Bjelland mentioned that in a recent survey it was found that only one-third of the people trusted bankers in the UK and it was the same in many other countries. 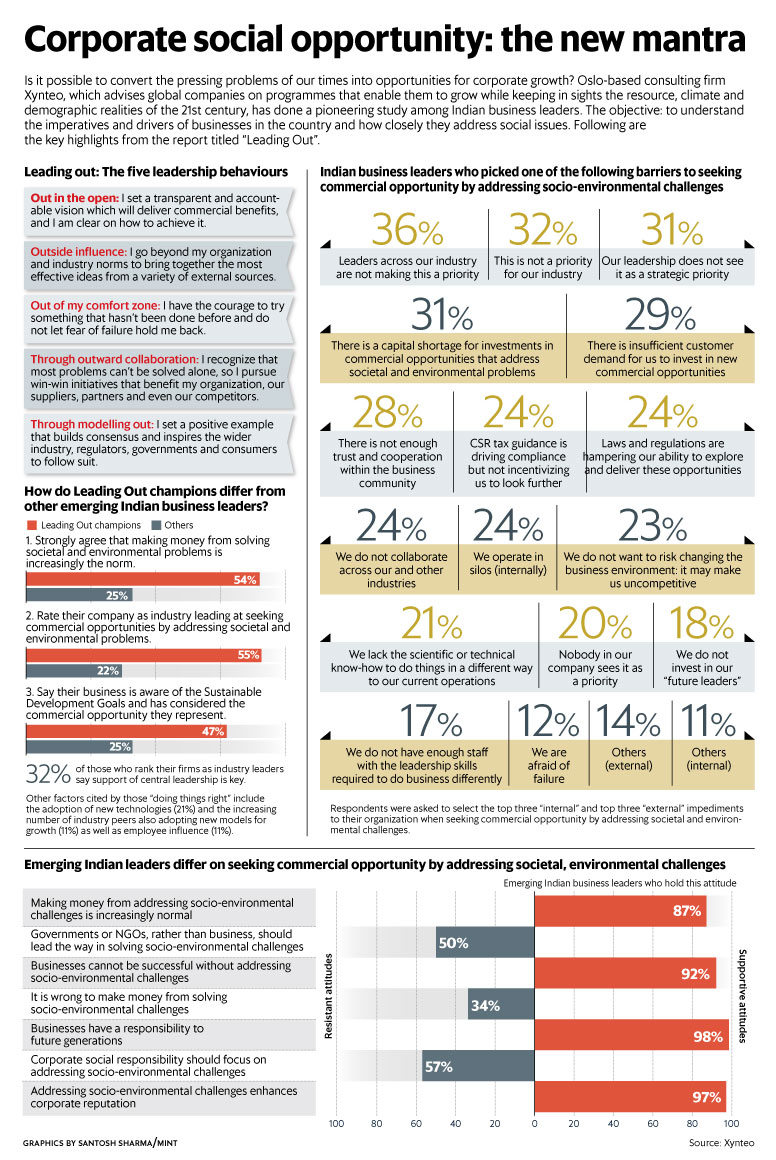 On the report, he said: “We are in trouble as the physical world is unravelling in front of our eyes, emotional stress is rising, leaders are with a broken spirit and they are losing spiritual altitude, so we need to look at emerging young leaders. That has been a very positive experience. One out of five young leaders are interested in leading out.”

The changing attitude represents the best hope for a meaningful battle against the challenges that have kept the poorest Indians underserved and deprived of the basics of human existence even after 69 years of political freedom.

In as much as businesses are the primary drivers of development in this era, it is business leaders who need to come up with answers to the needs of society. When what is good for society becomes good for business as well, a winning combination emerges.

Mehta concluded: “For us, innovation is a lifeline. Don’t worry about failures, learn from it and keep going on, it is then your purpose and values come in handy.”

A new generation of Indian business leaders is busy changing the widely-held perception that business by its very nature is antithetical to societal needs. Just how widespread is this new thinking and how deep is the transformation? For an answer, Mint partnered with Oslo-based consulting firm Xynteo, whose path-breaking study ‘Leading Out’ gives empirical evidence of this new agenda especially among future enterprise leaders of India’s top companies. Beyond the numbers what it tells us is that the passivity of corporate social responsibility (CSR), with its ring of self-righteousness, is giving way to the more positive intent captured by the phrase corporate social opportunity. Significantly, as Xynteo’s research shows, for those companies which have integrated these sustainability goals with the core of their businesses, the commercial returns have been well worth the efforts. That’s the real marker for our future because regardless of which end of the pyramid we are in, there are some needs that are universal.