Motherson Sumi is in preliminary discussions with banks to explore financing options for a bid, which if materialises, could pave the way for a second major acquisition in a short time. Its Rs 4,000-crore acquisition of PKC Group Oyj was sealed on January 21, which gave it a larger footprint in the US, something it had earmarked as a priority market.

“We always evaluate opportunities for inorganic growth and select options that are best suited to meet our customer’s requirements as well as create shareholders value,” a spokesperson for Motherson Sumi said in response to terming specific questions pertaining to its interest in the Bosch unit as “market speculations”.

There are potentially other bidders vying for the Bosch unit that include global private equity firms as well as Chinese auto components suppliers, the people quoted earlier said, indicating that the company may have to compete aggressively to make a winning offer. An offer is not certain yet, the people qualified said. 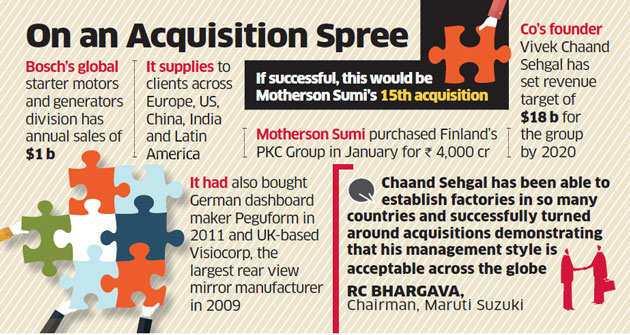 If successful, this will be Sehgal’s 15th acquisition in as many years.

Motherson Sumi may insist on binding contracts with Bosch’s customers as one of the conditions for the deal. It may use its European arm as the vehicle for the acquisition. Morgan Stanley is believed to be an advisor for the deal.

The euro 70-billion Bosch Group spun off its starter motors and generators division in 2015, and said it would look at a suitable partner or buyer as the division had better prospects as part of an alliance.

The division is said to have sales of over $1 billion, and supplies generators and starter motors for passenger and commercial vehicles to customers in Europe, the US, China, India and South America.

Its customer base is said to be similar to that of Motherson Sumi generating possible synergies if the two parties are able to agree on a deal.

Bosch, which operates through 450 subsidiaries in more than 60 countries, counts as its key business segments mobility solutions and consumer goods. It is owned by a charitable foundation. India is the only country where Bosch shares are publicly traded. Motherson’s founder Sehgal struck an alliance with Japan’s Sumitomo Wiring Systems Limited (SWS) in 1986 to manufacture wiring harnesses to supply to Maruti Suzuki. Since then, the company had made more than a dozen acquisitions and grown revenues nearly five-fold since 2010.

Motherson Sumi Systems Limited (MSSL), the group’s flagship company, reported consolidated revenues of $5.7 billion for the financial year 2016. It has 180 manufacturing plants located in 25 countries. Publicly-traded MSSL is 25.6 per cent owned by SWS.

The Sehgal family owns a 3 per cent stake in the company while nearly 37 per cent is held by Samvardhana Motherson International Limited (SMIL), an offshore entity. The remaining shares are owned by the public and financial investors.

Sehgal unveiled a five-year plan in 2016 setting a target for the company to achieve $18 billion in revenues by financial year 2020 and delivering returns on capital employed of as high as 40 per cent to shareholders.