In our previous weekly note, we had projected the week to remain subdued while keeping the overall trend intact. The Nifty50 ended the week gone by with a modest loss of 52.05 points or 0.57 per cent. In the coming week, we will see the index oscillating in a broad 175-odd points range between 9,000 and 9,175 levels.

This consolidation is expected to continue but the 9,000 mark is expected to act as sacrosanct support on a closing basis. We are not likely to see downsides beyond this, in the case of continued consolidation. This keeps the overall uptrend intact. We also have F&O expiry this week and this is likely to induce some volatility in the market.

Over the coming week, the 9,160 and 9,225 levels will act as resistance. Supports will come in at 9,035 and 8,970 levels. The Relative Strength Index or RSI on the weekly chart stood at 67.5726 and it was neutral, showing no divergence from the price. The weekly MACD is bullish even as it trades above its signal line. 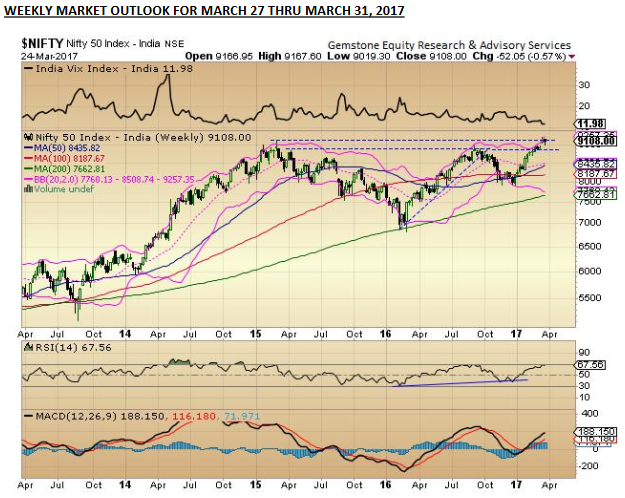 Pattern analysis presents a picture in sync with the daily charts. The Nifty50 saw a breakout on the upside. However, the way it happens in many cases, what we witnessed on the daily chart was a ‘classical throwback’. Under such formation, the prices return to the place from where it broke out.

This has resulted in a halt to the upward move if we translate this movement on the weekly chart. It is clear that the Nifty50 will take a while before it resumes its upward journey. However, all technical parameters remain in place and keep the broad uptrend intact.

All and all, we expect to see the Nifty50 to oscillate in a defined range in the coming week. Some amount of volatility will creep in given the expiry of the ongoing derivative series. No runaway rise in Nifty50 is expected. The wider-than-normal bands also suggest that the Nfity50 will remain in a capped range.

The key over the coming week will be to pick stocks selectively. It is advised to switch and trade sectors that are likely to witness relative outperformance vis-à-vis the Nifty50 in the coming days. The overall uptrend is likely to remain intact.

A study of the Relative Rotation Graphs or RRG showed that PSU banks are improving their relative outperformance with the Nifty50 very sharply. They will continue to do so in this week as well. Bank Nifty is expected to outperform relatively. IT stocks have been losing momentum and will continue this trend in the coming week as well. Realty and Media stocks are likely to remain in focus.

Broader market indices such as the Nifty Next50 and select Midcaps will also relatively outperform. Energy and Metal stocks may lag on a week-on-week basis. No major outperformance may be seen in auto and pharma stocks and they are likely to remain laggards as a whole.