At first blush, Gorakhpurs Miyan Bazaar would pass off as any city market catering to its dwellers. Until you notice a few shops that prefer to refer to it as Maya Bazaar on their signboards. What gives?

“If you check the gazette you will find the name as Miyan Bazaar. Yogi has changed the names with a verbal order,” says Shiraz Hussain, who runs a gun shop in Miyan Bazaar.

Cheek by jowl to Hussain’s outlet is a crockery shop run by Arun Sharma, for whom the market is Maya Bazaar. “Sab Yogi ki maya hai (It’s all Yogi’s magic),” he says. It’s not only Miyan/Maya Bazaar that appears to be facing an identity crisis. Not too far away is a marketplace that’s Hindi Bazaar for some, Urdu Bazaar for others. If the owners of Libas Ghar believe they are located in Urdu Bazaar, Sahu Fashion House next door has Hindi Bazaar on its billboard.

Game of the Name Ask the owners about the different addresses for neighbouring shops and they explain the phenomenon as “sahooliyat (convenience)”. “Muslims call it Urdu Bazaar and Hindus call it Hindi Bazar; the place is the same,” says Ajay Kumar, who runs Sahu Fasion House.

Yogi Adityanath, Gorakhpur’s five-time MP and head seer of the Gorakhnath mutt, is now chief minister of Uttar Pradesh. Fear, awe and reverence can be found in equal measure in the nooks and crannies of the city located on the banks of the Rapti river in northeast UP.
“He is like a deity. Who can question him?” shrugs Shaukat Hussain, a cloth merchant in Urdu Bazaar. “He has more such ideas up his sleeve.”

Arvind Yadav, who runs Yadav Lassi Bhandar, insists his outlet is located in Hindi Bazaar. “Calling it Urdu Bazaar on the boards does not change facts,” he grins, as he tops up a kulhad with yogurt. The riddle of identity persists in different parts of the city. Alinagar has been, to mix metaphors, rechristened as Aryanagar, Lahaladpur is now Alahaladpur, Humayun Nagar is Hanuman Nagar. 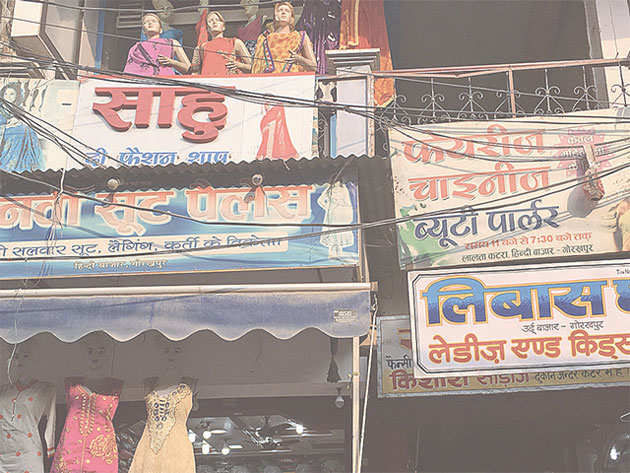 “Linking names of markets to religion is not a good idea. After all, all roads lead to the same place,” says Shaukat Ali, a septuagenarian who has a footwear shop at Ali/Aryanagar.

Calling Adityanath a “nice man”, JK Lal, principal of St Andrew’s College, counters that if Adityanath will not talk about Hindus and all things Hindu, then who will? “There has been no incident of anyone from a particular community being harmed. There is nothing wrong in changing names.” Gorakhpur is a Hindu-dominated district. Of its population of over 44 lakh, about 40 lakh are Hindus; a little over 4 lakh are Muslims, according to Census 2011.

Despite the renaming spree, Gorakhpur is no case study in polarisation. Three-fourths of the shops in the market leading to Gorakhnath mutt are run by Muslims. The gaushala of the Gorakhnath mutt has many Muslim workers. The mutt’s followers are mostly from the backward castes, with construction work being handed by a Muslim called Yaseen; even the accountant of the mutt is a Muslim.

The city has been largely peaceful for the past decade. It seems to have learnt its lessons after around 40 communal riots between 1998 and 2007. The peace can’t be taken for granted ¡X not when supporters of the fiery leader raise the oft-repeated slogan: “Gorakhpur mein rehna hai toh Yogi-Yogi kehna hai (If you want to stay in Gorakhpur, keep chanting the Yogi’s name).”

A day before Adityanath was named chief minister, he seemed to be in a mood to change many more names. “Abhi toh aur naam badalne hai,” he had said in a TV interview. In his first week as CM, however, he seemed to be taking Gandhi’s words seriously: “You must be the change you wish to see in the world.