Ranveer Allahbadia, 23, always knew he did not want to become a doctor. His father Gautam is one, as is his mother Swati, and his paternal grandparents and an uncle as well. The Allahbadia family house in Five Gardens in Wadala, Mumbai, even has a mini clinic on the ground floor.

Allahbadia studied engineering at DJ Sanghvi College of Engineering in the western suburb of Vile Parle. A health freak, he is also a fitness trainer. In his last year in college, the entrepreneurship bug bit Allahbadia and he worked on an idea for “Uber for Fitness Trainers”. His partner was Binny Sridharan, his fitness coach. The duo looked for investors even as they were fine-tuning the concept. That search ended pretty soon when a prospective angel bluntly told them that for the Uber-for-fitness idea to work, one of them had to become famous.

Allahbadia took the advice in all seriousness, and set out in search of fame. It led him to YouTube, with Allahbadia shooting and releasing videos on health and fitness on a channel that he called BeerBiceps. He encountered fame when his video posted in November 2016, on Aamir Khan’s training regimen in Dangal, got a lot of viewers — and a lot of hate. Allahbadia had suggested that Khan had used steroids, and the superstar’s personal trainer Rahul Bhatt responded by calling him an armchair expert. As his channel hit a million views, Allahbadia put his startup project on the back burner and concentrated on his YouTube channel.

Allahbadia is not alone in making such a YouTube triggered career pivot. Many youngsters today are giving up their career goals to upload more than one video a week and build a channel and a personal brand. Take, for example , 19-year-old Yaman Agarwal of Hyderabad who has tasted so much success with his cookery channel CookingShooking that he has given up on conventional college and is studying BCom through correspondence, focusing all his energies on shooting and uploading videos. Or, take Bengaluru-based Roshni Mukherjee, who quit her quality analyst job at Hewlett-Packard to focus on an educational channel called ExamFear.

Building A Personal Brand
Are the earnings from such YouTube channels enough to sustain young professionals, especially those not in popular entertainment genres like music and comedy? Mohit Gundecha, cofounder of talent assessment and analytics company Jombay, says it is a smart move despite the risks, and that video and social media marketing skills are sought after these days. “Even if it doesn’t work very well, they would have built either a personal brand by then or enough skill set to be easily hired by marketing agencies or marketing functions of different organisations.” 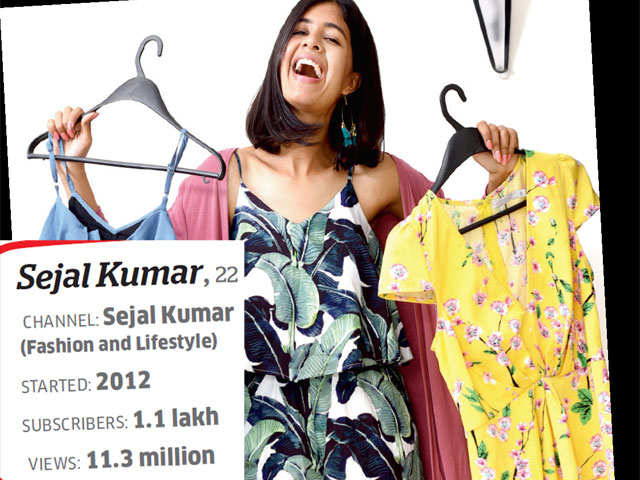 Mukherjee worked for Wipro before joining HP in India. Now, at age 31, she has turned her back on a six year-old career. A master’s degree in physics from Delhi University notwithstanding, Mukherjee has moved on to YouTube to follow her passion for teaching. Her venture is now operating on a not-for-profit basis and she works with part-timers spread across India. Among other YouTubers is Sejal Kumar, 22, an economics graduate from Lady Shree Ram College in Delhi. Sejal, who now feels her degree is of no use, says that she is learning a lot more while promoting her YouTube channel named after herself.

Then there’s Ranjit Singh, 38, who runs a gadget reviews channel called Geeky Ranjit. He has given up coding to promote his YouTube channel even though he can earn more from the former.

Clearly, there’s the promise of a great future. Satya Raghavan, head of entertainment for YouTube in India (a division of Google India), says that what started in 2014 as a content creation wave on YouTube, especially in music and stand-up comedy (which saw the rise of All India Bakchod and Vir Das, among others), has taken on a new dimension in 2016-17. “Over the past year, we have seen a lot more regional content and more diverse areas — right from food, fashion and beauty to nursery rhymes and stories for kids, education and gadget reviews.” 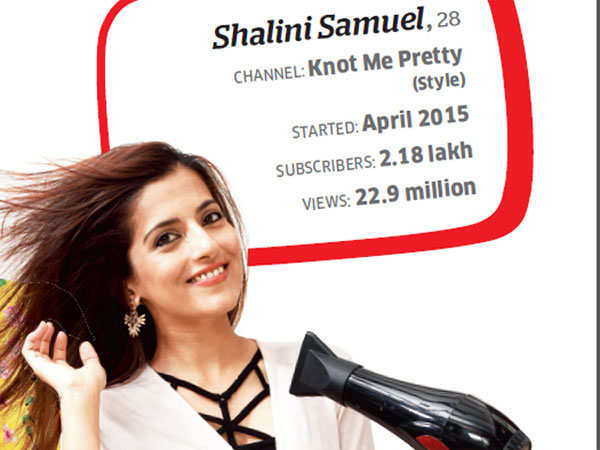 Unlike comedy or music, where the moolah often comes from stage shows and live appearances, the verticals that are coming up now are more focused on delivering content through YouTube alone. Some of the early Indian YouTube sensations like Kenny Sebastian (stand-up comedy), Abish Mathew (talk show), Sahil Khattar (of Being Indian channel) or Shirley Setia and Vidya Iyer (music and mashup) have all used YouTube as a stepping stone to live shows. Sebastian confessed that he is a filmmaker at heart, and hopes to go on to make full-length feature films. Iyer, who does her mashup channel called Vidya Vox, is now in the US to work on her music. Setia is looking for a break in Bollywood.

One may look at it as entertainment versus education and information. While the entertainers have clearly moved from YouTube to live shows and television, for those like Allahbadia, Sejal, or Ranjit who dabble in education-and information-oriented channels, YouTube continues to be the mainstay.

Raghavan explains how it works. As a channel becomes popular, the owner can decide to monetise it. Advertisements start appearing at the beginning of the videos uploaded, according to YouTube/Google’s algorithms. YouTube keeps 45% of revenues and the rest is for the content creator, who can also earn through sponsorships and product placements. 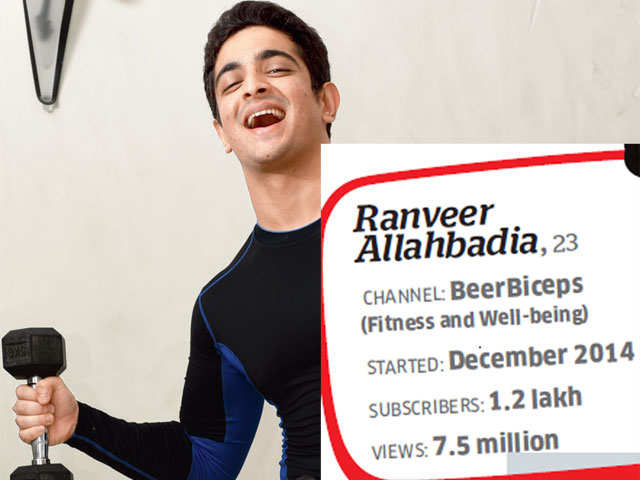 How much they can earn depends on the landmarks they achieve. A million views, of all videos, is sure to keep advertisers interested, as is a base of 1 lakh subscribers who sign up to receive updates about new videos. Music and comedy have a high proportion of views to subscribers. Frequent updates, at least twice a week, seem to be another must-do. It’s hard work.

Sejal Kumar, who creates videos on fashion and lifestyle, as well as on her own life, has done sponsored videos with Benetton and Westside. These bring in extra money, as do product placements. 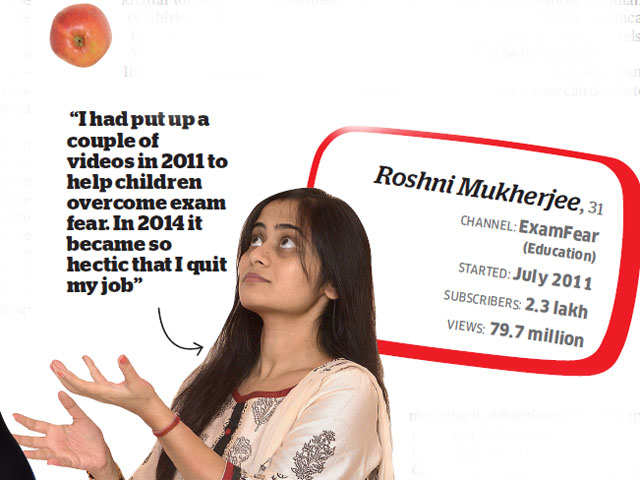 Apart from YouTube, there are Instagram posts and websites that some like Geeky Ranjit (www. tech2buzz.com) maintain on their own. Monthly earnings, after a channel hits a million views and one lakh subscribers, can range between Rs 30,000 in a bad month to Rs 80,000 in a good one. As views and subscribers go up, so do earnings, but not necessarily in proportion.

“It’s possible to make a living but there are several factors — like where you are based, whether you are living with your parents or have to pay rent, and the number of people you need for your shoots,” says Shalini Samuel, who runs the YouTube channel Knot Me Pretty.

Samuel had her YouTube high with a video on how to tie one’s hair in a messy bun or a messy knot, uploaded in September 2016. This video alone has got 4 million views so far. A commerce graduate who trained as a hairdresser with BBlunt and then at the Vidal Sassoon Academy in London, she has done well on You-Tube, enough to quit her job at a Mumbai salon. She says: “My mother knows what I do, but my father still can’t understand the YouTube business. He just knows I am doing well and very busy.”

But before making money, there comes a lot of learning. Yaman Agarwal of CookingShooking has been at it since he was 14. “I always had the cooking ka kida (bug),” he says. The first video of him cooking, shot by his elder sister, got 13 views in 12 hours. Soon he started posting videos on festive occasions like Holi or Diwali. Then once a month. A video on eggless baking without an oven became so popular that he decided to do a series. As revenues started to come in, Agarwal figured out that he needed to invest in his channel. He converted a part of the living room into a studio. Says Agarwal: “Since I was shooting myself, only my hands were visible on the video. There were some comments wondering if that was indeed me cooking. That was when I decided to have a proper arrangement like in TV shows.” His sister and father help him keep the channel going, lend a hand with the shoots and keep a tab on the accounts; he re-invests all his earnings in buying equipment. 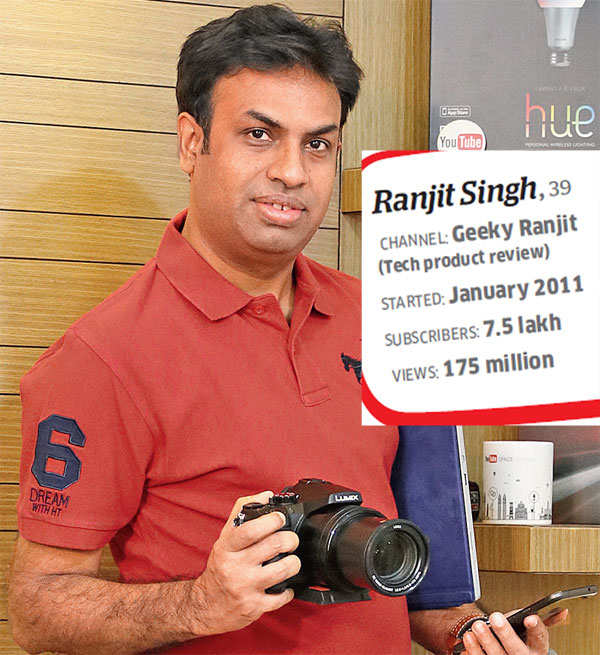 A Full-time Job
YouTubing is a full-time job. Says Roshni Mukherjee: “I put up a couple of videos in 2011 to help children overcome exam fear. Slowly I got requests and ideas for more, and started doing more of these, until in 2014 it became so hectic that I decided to quit my job.” Her husband Gautam supported her decision. She started with science and maths, especially for higher classes, but now uploads videos that can be relevant for students from Class VI onward.

Money is not always easy to come by. For a freelancer, running a gadget review on the side can be a costly business. Ranjit Singh says Geeky Ranjit ran up losses in the first three years. “I used to purchase gadgets from the market, finish my review in two-three weeks and then return those gadgets at a loss. It took me nearly three years to break even.” He says things have improved in the last two years: now he gets 65-70% of the products for review from companies.

The advice from the bigger stars on YouTube who dabble in music and comedy is to look beyond the website. Says Vidya Iyer : “There’s some revenue through YouTube ad sharing with Google but it’s not nearly enough to live on or pay a real team.”

Sahil Khattar of the channel Being Indian says that while being on YouTube gives him a leverage, “it is about generating valuation. That is what the internet is about”. Abish Mathew, who does the talk show Son of Abish, advises: “If you are on YouTube only to earn money, then you are not getting it.” 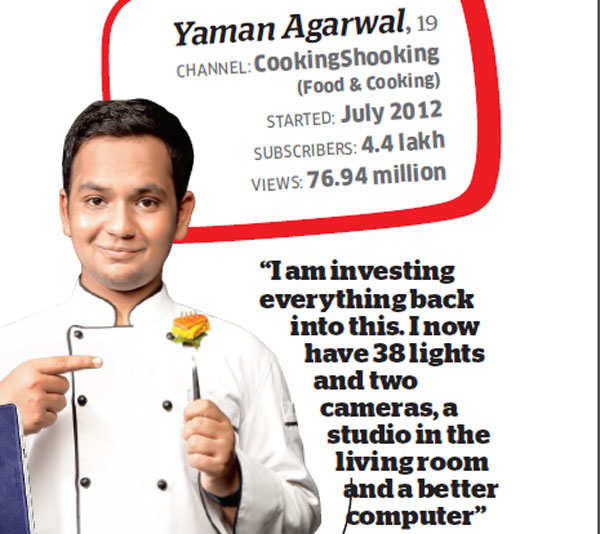 What worked for entertainment may not be easily replicated in a different genre that depends on informing and educating the viewer. Sejal is quite sure she wants to build a personal brand and see where it goes. At 22, she has all the time, as does Allahbadia at 23.

Mukherjee is building a not-for-profit YouTube channel that is funded through a contribution link apart from advertising. She’s aware there has to be something more and is working on a website that will aid students. Agarwal has tried taking cooking classes. Appearing on television also remains an option for Ranjit as does a new venture.

In the West, top You-Tube stars like PewDie-Pie, Roman Atwood and Lily Singh rake in the moolah — they earned $15 million, $8 million and $7.5 million, respectively, in 2016. India’s up-and coming YouTubers can take heart.