in 2011, ICICI BankBSE 2.90 % was confronted with a unique problem. Most of the frontend staff of India’s largest private sector bank by consolidated assets were reasonably fresh, and had to be quickly trained to interact online with customers. A lot of time was wasted toggling between multiple screens to understand a consumer’s profile.

“While the system was automated, it had many layers,” recalls B Madhivanan, chief technology and digital officer of ICICI Bank. The challenge was to get the customer service teams to climb up the experience curve in quick time.

Enter CustomerXPs, a year-old startup formed by a bunch of ex-Infoscions. CustomerXPs built augmented intelligence software that dipped into various internal systems of the bank to create profiles of customers, their relationship with the bank and the best product they were likely to buy next. “That was our first tryst with fintech,” points out Madhivanan.

That tryst evolved into the bank’s first concrete fintech initiative in 2012 when it launched ICICI Trinity, a programme targeted at 23 premier engineering colleges. Of 620 ideas gathered from students, the bank built 12 prototypes, and finally rolled out one product last March: [email protected] A programme that replicates the work environment at home by providing employees access to their work applications, [email protected] home uses a unique facial recognition technology that ensures against impersonation of the employee. “Over 300 women employees work from home using [email protected],” says Madhivanan, adding that since then the bank has been closely working with a clutch of fintech startups.

Win-win partnerships
Working with startups — considered more nimble and aggressive, and therefore more innovative than established institutions — may seem a compulsion, but Madhivanan doesn’t agree. “There is nothing that a bank can’t do that any fintech startup can,” he asserts. “It’s an issue of priority and striking a balance.”

He adds that the bank is guided by three principles before roping in a startup: what it brings to the table, the probability of its success, and whether it is solving a genuine problem. Every month, he lets on, the bank organises a demo day where 8-10 fintech companies come up with working prototypes of their ideas and exhibit.

Call it a priority or a compulsion, or a marriage of convenience, what seemed unthinkable a few years back is now the most preferred option for both banks and startups: working together rather than disrupting each other’s business.

Take, for instance, Kotak Mahindra Bank. The biggest bait for the bank joining hands with fintech startups is the opportunity to cost-effectively test various solutions in a short span of time.

It discovered that such consumers valued accounts without a minimum balance and charges, and wanted transaction convenience through channels of their choice.

Months later, Interface Business Solution (IBS), a digital marketing startup, approached the bank with a solution to provide a banking transaction experience through Twitter. This led to the launch of Kotak Jifi, India’s first digitally and socially connected bank account in January 2014. It was an invitation-only account, where users had to sign in via Facebook, with the option to invite friends to join.

“We became the world’s first bank to offer Hashtag Banking on Twitter, which led to many more such partnerships with fintechs,” says Sharma.

Partnerships with fintech ventures, says Sharma, create value for banks as the solution is often designed around business model innovation, process efficiency and revenue opportunity. “Such partnerships are win-win,” he adds.

KPMG and CB Insights, in their ‘Pulse of Fintech Q3 2016’ report, noted that while banks once viewed next-generation payments solutions as too small to be credible, they are increasingly feeling threatened by the disintermediation occurring within the P2P payments space. Ultimately, if banks are no longer viewed as the service provider for consumer payments, there could be an adverse impact on their revenues, it added.

In 2011, Brett King, founder of American retail mobile money service Moven, wrote Breaking Banks, which sent tremors across the financial world. In the next 10 years, King then predicted, the world would see more disruption and changes to the banking and financial industry than it’s seen in the preceding 100 years. Six years later, the Moven CEO was selling his software to the banks he once mocked.

“We had grand ideas of being the Facebook of banking, and being a new form of bank account,” King reportedly said recently. “We realised that if you want millions of users as a bank, it is a very different proposition than building a social media network.”

Banking bets
Back home, a flurry of fintech startups have realised the virtues of working closely with banks. Bala Parthasarathy, cofounder of MoneyTap, is one of them. Parthasarathy reckons the demise of banks was exaggerated. After all, it’s any day cheaper to take a loan from a bank than elsewhere once you manage to wade through the paperwork and qualify for one. And unlike, say, hailing a taxi or buying a mobile phone on an ecommerce site, depositing money or taking a loan involves regulations that every startup or bank must go through, he points out. Well-meaning though these regulations are, they strongly favour the incumbent bank.

“Lending Club, Prosper and a host of Chinese peer-to-peer lending startups found out the hard way that cutting corners up in a train-wreck for the startup,” Parthasarathy, who roped in RBL Bank launch partner of MoneyTap. Started September 2016, MoneyTap is India’s app-based credit for consumers, offered in partnership with leading banks and NBFCs, claims. “Partnership is the key.” There have been instances in the recent past when banks fintech ventures head-to-head. Bank of India blocked users from transferring money using banking to mobile wallet services, Bank blocked Flipkart’s PhonePe, HDFC BankBSE -0.41 % CEO Aditya Puri took a dig Paytm by questioning the business model mobile wallet players. Yet, as venture capitalists point out, there is a huge untapped opportunity for banks and startups. “Of course, there competition and some of it will play out publicly. But neither can do it alone,” says Sanjay Swamy, managing partner at Prime Venture Partners.

Cohabitation is the reality
The Reserve Bank of India (RBI) too believes in collaborative coexistence. While conceding that the fintech sector impacting banks, RBI deputy governor Gandhi recently acknowledged that writing off the latter are probably getting wrong. Disruptive fintech innovations cannot eliminate or decimate traditional banking or finance, he said at a fintech conference in Mumbai early this month.

Fintech companies are accelerating the pace of change and reshaping the financial services industry radically, remarked Gandhi. Banks and financial institutions have realised that there will be value in adopting or adapting the fintech innovations for mutual and customer benefits.

There are ready takers for this mantra of adopting and adapting. Collaborations help give shape to ideas, says Smita Bhagat, branch banking head of HDFC Bank. “If there is a readymade solution on offer, then it makes better business sense to opt for it than develop it ourselves. Disruption that benefits the customer will happen only through collaboration and it’s a win-win for both parties.”

For the past two years, HDFC Bank has been hosting Digital Innovation Summit, which has enabled the bank to create a pool of potential ideas from fintech startups.

Nobody would know the value of tying up with a huge bank better than Chillr, India’s first multi-bank mobile payment platform, which counts HDFC as its first and largest partner bank.

Before entering into a tie-up with HDFC Bank in September 2014, Chillr had talked to several smaller banks, but most stayed away due to inhibitions of working with a startup. “When we pitched to about the idea,” recounts Mohamed Galib, cofounder of Chillr. “Since then the journey has been pretty amazing.”

Chillr has tied up with 10 banks on the IMPS platform (which facilitates instant interbank electronic fund transfers via mobile phones), enjoys over a million monthly active users on its app, and recently crossed `500 crore worth of monthly transactions. By the end of this month, it will launch UPI (which allows account holders to send and receive money through mobile phones without entering their bank account details. this will enable customers of 35 other banks to experience Chills.

For Niki.ai, an AI startup that counts Ratan Tata among its investors, bank-fintech alliances are a natural evolution. While fintech startups offer agility and innovation, banks are able to provide a solid base and a readymade pool of consumer trust, contends Sachin Jaiswal, CEO of Niki.ai.

Ritesh Pai, country head, digital banking, at Yes Bank, reckons that banks are aware that most innovations will happen outside their organisation. “Startups are more agile, and banks need to partner them. This will only help improve the banking experience,” he adds. Startups are also able to concentrate on specific problems in the banking sector and solve them using the latest technologies. This gives banks an opportunity to integrate them into the larger financial supply chain.

Yes Bank collaborates with PhonePe, a UPI-based mobile payment company that was bought by Flipkart last year. It began discussions with founders of PhonePe, Sameer Nigam and Rahul Chari, in December 2015, even before the company was acquired by Flipkart. While the entire banking industry was focused on building their own apps with a focus on P2P payments, Yes Bank enabled the PhonePe app to launch UPI services for the peer-to-merchants (P2M) part of the ecosystem. In less than a year since the launch of UPI, Yes Bank claims to have over 30% share of transactions on the UPI platform; and this would not have been possible without this partnership, says Pai.

“We never considered fintech companies as our rivals,” he says. The bank, adds Pai, has launched its fintech accelerator, which provides startups access to Yes Bank’s over 2 million retail customer base and more than 15,000 SME and corporate clients.

In his annual letter in 2015, Bill Gates noted that “we need banking but we don’t need banks anymore”. Perhaps not yet. 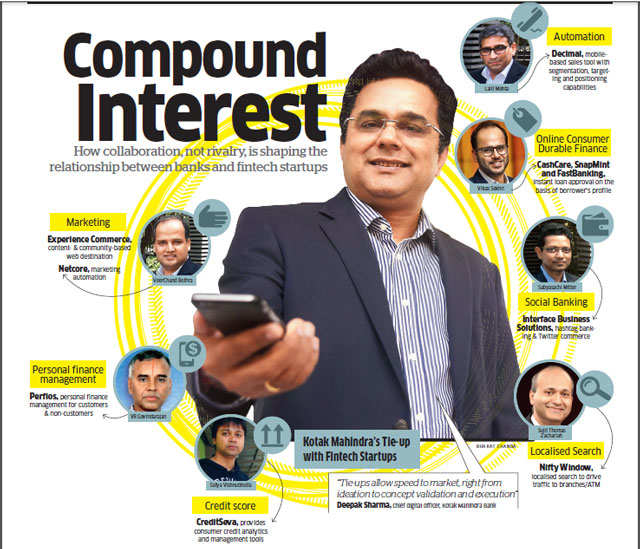 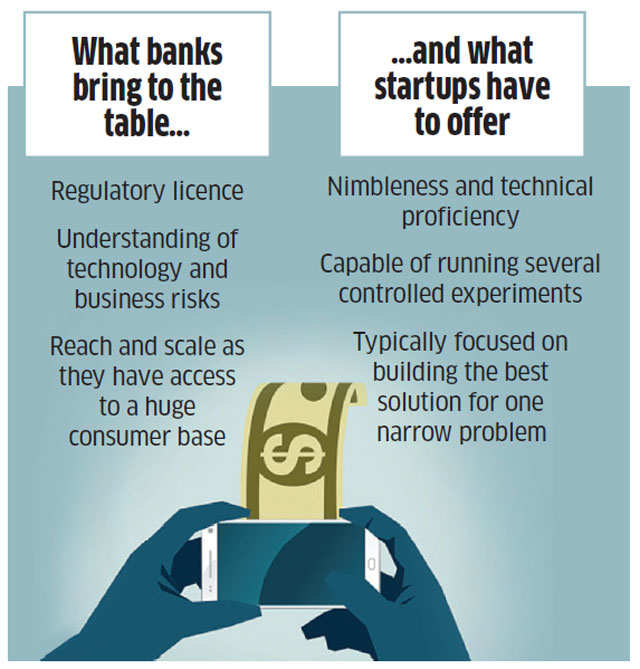 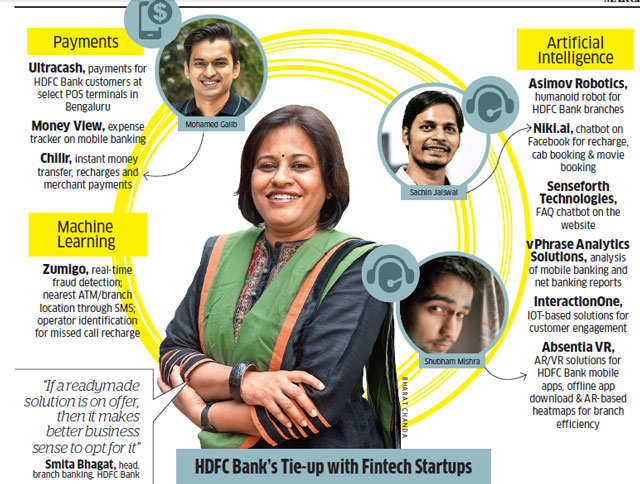 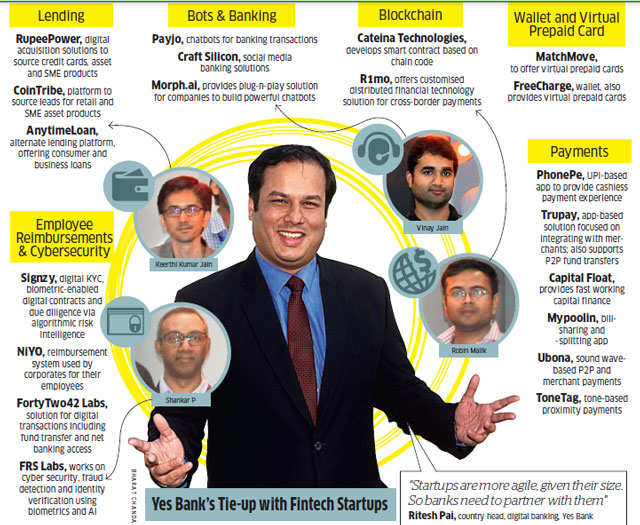 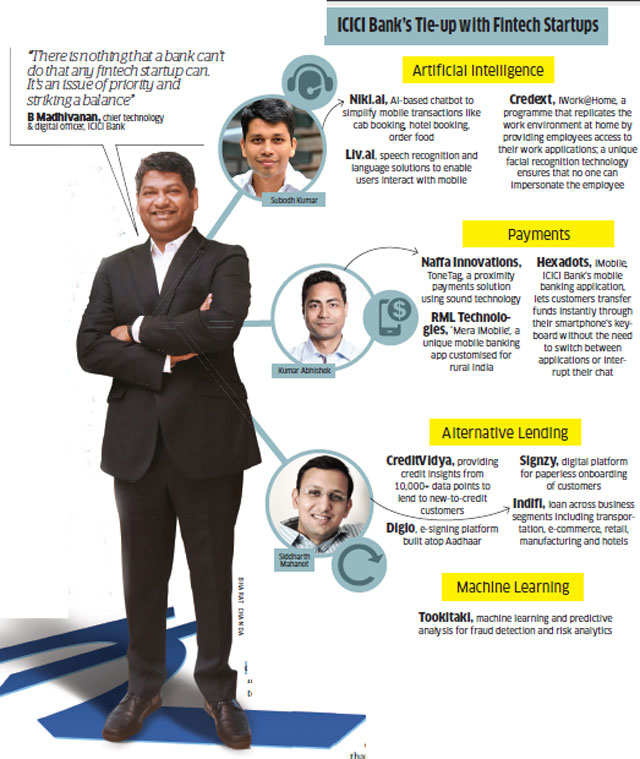