Stock markets across the globe climbed to new record highs after President Donald Trump’s election signalled corporate tax cuts as well as a programme of infrastructure spending. With the jump in inflation largely induced by energy prices, central banks across the globe have started relooking their accommodative stance at which the US Federal Reserve is walking alone.

There are growing expectations that the Bank of England and the European Central Bank could follow the Fed sooner than previously thought. Recently, the Fed hiked rates in March and guided for a gradual increase.

Back home, the domestic equity market continued its rally on the back of a strengthening domestic currency and on expectation after winning the UP election that the BJP government at the Centre is expected to hold power post-2019 general elections. Investors are also anticipating that the government would push for stronger and bolder reforms.

In recent times, foreign market participants are showing interest on the domestic market. However, domestic institutional investors are booking profits thanks to redemption pressure, be it from mutual fund schemes or Ulip or the fund managers’ need to raise cash.

Actually, a weak dollar and hope of an improvement in corporate earnings have lured foreign market participants to the Indian market.

Beside GST, clarity on policies such as approval to FDI in insurance, broking, retail, service sector carries the potential for further strengthening of economic growth.

Global and domestic factors have so far kept up the momentum in Indian equities supported by domestic and lately foreign institutional buying. Limited impact on corporate earnings post demonetisation has also raised expectations of earnings growth in the ensuing fourth quarter results that will kick in from April.

Optimism on global economic outlook and back home has pushed valuations of the benchmark Nifty50 index to a level where it has started facing resistance. 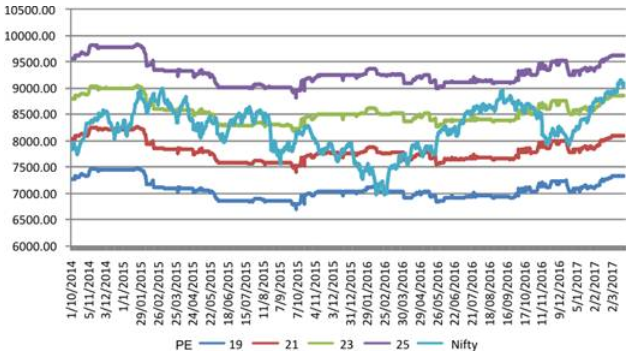 The market is cautious on the valuation front as all positives are currently factored in keeping future corporate earnings estimates in mind. As an investor, the key to success and to earn a gradual return is through systematic investment and optimum utilisation of opportunities by investing more as and when the market corrects due to events that have short-term repercussions.