After a series of sharp falls, global rubber prices are down about 25% since February. Going forward, analysts are fairly certain that prices will not pick up soon as there is a huge inventory pile-up in rubber producing countries. Also, there is excess supply pouring into global markets as rubber tapping nations like Thailand are releasing inventory held to support farmers.

The picture is not very different in India. Rubber prices are receding after soaring 50-60% in a year until February. Stocks are comfortable too. 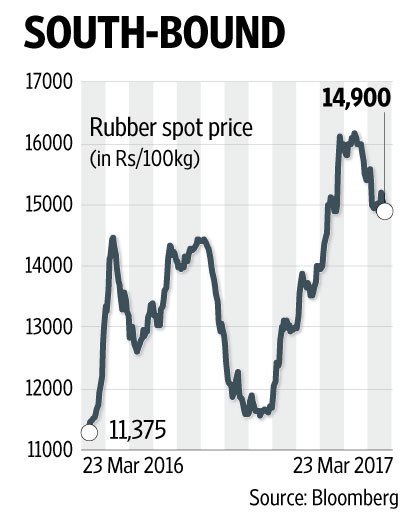 Meanwhile, this would give Indian tyre firms some respite from rising raw material costs. Over the last four quarters, raw material cost as a percentage of sales rose by 200-300 basis points. A basis point is 0.01%. Profitability was punctured, as companies were unable to increase tyre prices in the replacement market because Chinese tyres rolling into Indian markets at around two-thirds the price were leading to stiff competition.

In this context, the recent development of Chinese tyre imports shrinking from 455 containers in October to 155 in February is a blessing for domestic companies. They have raised replacement market prices in two rounds by around 8% since January.

A report by PhillipCapital (India) Pvt. Ltd says that tyre companies are gearing up for a cumulative hike of 15% by mid-April. “Rise in tyre prices along with better sales especially in the truck and bus radials segment augurs well for domestic firms,” adds Nitesh Sharma, an analyst at PhillipCapital. In addition, stable crude oil prices could also support profitability.

In other words, the present scenario of low rubber prices and rising tyre prices is a double bonanza for tyre companies. Also, Chinese tyres are unlikely to push their stock aggressively into Indian markets as recent reports suggest they find the US markets more lucrative, given the auto industry revival there.

Firms like Apollo Tyres Ltd, which has nearly half its revenue accruing from the TBR (truck-bus-radials) segment should benefit. Also, MRF Ltd and Ceat Ltd have healthy replacement market presence that will drive revenue and margins in the near term.

Brokerage firms are hopeful of a quarter-on-quarter expansion in operating margins for the sector during the March quarter. Indeed, tyre stocks have been on a roll in the last couple of months. Yet, if the current situation continues, there could be a rerating from the low single-digit price-to-earning multiples that they enjoy at present.