NEW DELHI: The oil ministry has directed state oil firms to prepare a roadmap for creating integrated firms. Oil secretary Kapil Dev Tripathi held a short meeting with the chairmen of state oil firms last week and asked them to submit their respective plans for integration within weeks, according to the people present in the meeting.

In their plan, companies have to indicate who they will prefer to combine with and what kind of synergy that will bring, a person privy to the meeting said.

The ministry has undertaken this exercise as a follow up to finance minister Arun Jaitley’s budget speech where he announced the government’s intent of restructuring state oil firms to create an integrated oil major. 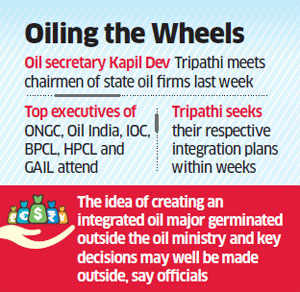 Last month, media reports, citing unnamed top officials, said the government planned to sell its entire equity stake in HPCL to ONGC, helping build a company that will have a presence across the industry value chain. The reports also said all other state oil firms will remain untouched.

The idea of merging state oil firms is more than a decade old and was resurrected in the middle of last year when the Cabinet Secretariat referred the matter to the oil ministry. But it made little progress until the budget announcement, which has prompted consultation with oil companies.

The idea of creating an integrated oil major germinated outside the oil ministry, and so it is entirely possible that the key decisions regarding this will be made outside, officials familiar with the matter said. Therefore, its not necessary that the plans state oil companies present will actually get adhered to, and the government may just direct them according to what it thinks is the best way to create an integrated player, the officials said.