BENGALURU: Last September, when the campaign against the now junked steel flyover project was at its peak, the Bangalore Development Authority (BDA) quietly borrowed a loan of Rs 400 crore from the Housing and Urban Development Corporation (HUDCO).

The loan was raised to fund six mega housing projects whose title deeds had to be mortgaged in exchange.

On the other hand, the Bangalore Water Supply and Sewerage Board (BWSSB), which is deep in debt, is liaising with the city civic corporation and the BDA, which together owe the water utility Rs 207 crore in dues. This money can cover revenue expenditure of the utility for an entire month.

While the BBMP’s financial management has been in public focus, the BDA and the BWSSB have escaped attention. They are, however, as poor as -and in certain parameters worse than -the BBMP, according to available data. The Bangalore Metropolitan Transport Corporation (BMTC) fares better in financial management, having moved from incurring losses over a decade ago to making profits. 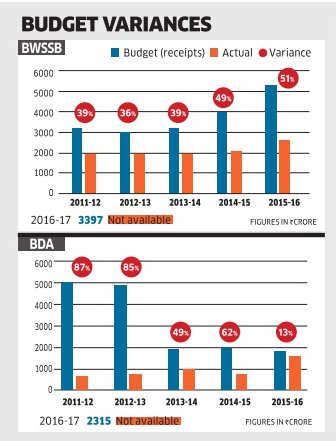 The BDA’s weak financial position is worrisome, especially because it is the designated city planner covering 1,294 sq km of the Bengaluru metropolitan area.While it is been tasked with executing crucial infrastructure projects, the Authority has found few takers for its housing projects, which make up for two-thirds of its revenue.
Both the BDA and the BWSSB have consistently fallen short of their own budgetary estimates. In the period between 2012 and 2016, the BWSSB’s annual budgets have recorded a variance of 36-51 per cent while the BDA is worse with a variance ranging 13-87 per cent.