MUMBAI: US-based Evergreen Power is in talks with investors, including private equity, infrastructure funds and strategic investors, to raise up to $100 million in equity to ramp up its wind energy projects in India, its top executive

The company wants to bring 280 megawatts (MW) of wind energy online in the next 12 months in the states of Tamil Nadu, Karnataka and Madhya Pradesh.

Eventually, it aims to scale up wind energy production capacity to 1 gigawatts by 2020 by adding 250-350 MW every year.

“We are seeing tremendous interest from serious investors, not just some people testing the waters. They want to put significant capital to work in India. India’s macro-factors, central government strength is instilling confidence in the investment community,” said Surjeet Kumar, co-founder at Everereen Power. 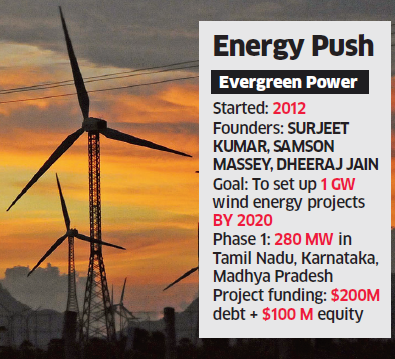 The company wants to close fundraising in 60-90 days. Kumar said it would also acquire $200 million in debt to build the capacity. Ambit Capital Pvt Ltd, the leading investment bank, is the exclusive financial adviser to Evergreen Power. Evergreen Power was founded in 2012 and has several large wind projects under development.

India has set a target of installing 100 GW of solar capacity and 60 GW of wind capacity by 2022. The renewable energy sector is expanding at a rapid pace as the country looks to meet its commitment made at Paris Climate Change summit.

India has to achieve about 40% cumulative electric power installed capacity from non-fossil fuel based energy resources by 2030. The sector is undergoing consolidation with tariffs falling to record low levels. In January, renewable energy firm Orient Green PowerBSE -1.40 % Co said it is evaluating a merger of its wind power business with IL&FS Wind Energy.

“We are very positive about the renewable sector in India despite pricing pressure. Players are consolidating to attain scale which is very important. Consolidation is a sign of a strong and mature industry. It points at greater investor appetite,” said Kumar.

India received $1.77 billion foreign direct investment in non-conventional energy sector from April 2014 to September 2016. It was among the top 10 in the world investing in renewable energy, according to UN Environment Program’s (UNEP) ‘Global Trends in Renewable Energy Investment 2016’ report.

“One of India’s major advantages today and going forward is that its renewable energy potential is vast and largely untapped,” according to NITI Aayog, a Government of India policy think-tank.

“The good news also is that costs of generating renewable energy have fallen steeply in the past decade, and once projects are set up, costs are not likely to increase over life of the asset – typically 25 years.”