Mumbai: The listing of Avenues Supermarts Ltd, the parent of retailer D-Mart, lived up to its hype, adding to the Midas-like reputation of its founder Radhakishan Damani. Its shares opened 102% higher than the issue price, before closing the day at Rs640.75 apiece, up 114.3%. At the end of trading, D-Mart became India’s most valuable listed retailer and helped the Damani family barrel past Anil Ambani, Ajay Piramal and Adi Godrej in the country’s billionaire rankings. 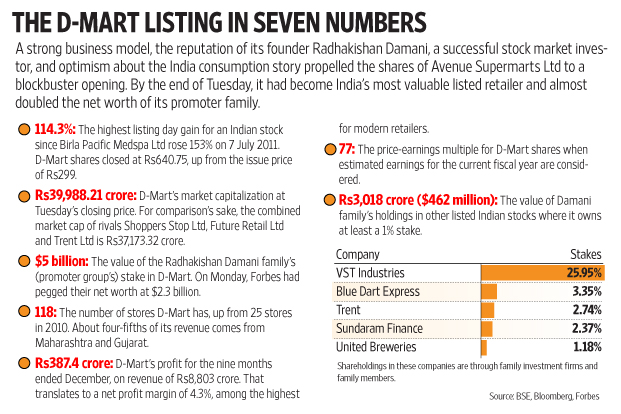 The effect of the stellar listing was such that other stocks where Damani has significant holdings (either through investment firms or his brother Gopikishan Damani) also rose on a day when the broader market closed 0.11% down.

For instance, shares of VST Industries, where Damani owns 25.95% through his firm Bright Star Investments Pvt. Ltd, jumped as high as 9.9% on Tuesday before closing 3.8% higher. Apart from VST, Damani owns stakes of at least 1% in 16 other firms across sectors such as cements, television and logistics.

On Monday, Forbes had calculated the Damani family’s net worth at $2.3 billion. At Tuesday’s closing prices, the family’s 82% stake in D-Mart alone is worth Rs32,871.75 crore, or $5.03 billion. Its stake in other listed entities is worth another Rs3,000 crore, besides a property portfolio that includes the 156-room Radisson Blu Resort in Alibag, according to Forbes.

Investors started betting on VST Industries on expectations that Damani’s magic will work on it, said Prakash Diwan, a director at Altamount Capital Management Pvt Ltd. “However, Damani is just a stakeholder in VST Industries whereas he is a promoter of D-Mart. He is a non-operational investor and not running business of VST Industries. That’s the difference,” warned Diwan.

The Damani effect had shown up in the demand for the D-Mart stock when it had opened for subscription. The initial public offer was subscribed 103 times when it opened earlier this month. Damani, considered to be the mentor to billionaire stock market investor Rakesh Jhujhunwala, is known to look at fundamentals and have the patience to see his investments through.

“The shares were in high demand as it was a (Radhakishan) Damani stock and a profitable retail, which led to huge oversubscription,” said independent market analyst Ambareesh Baliga. “The company’s model is superb, and the best amongst other retailers, and they stuck to their model through the year.”

D-Mart’s success has lessons, not only for rivals in the brick-and-mortar space, but also for e-commerce companies, which are struggling to make profits, said experts.

The firm has been focused on what it wants, and its expansion has been measured. In the first nine years of its existence, till 2010, it had just 25 D-Mart stores. Only after perfecting its business model did the company re-expand to around 118 stores—this too, largely in Western India. The company intends to spend the proceeds from the IPO to repay debt of Rs1,080 crore, fund new stores to the tune of Rs366.6 crore, and on general corporate expenses.

Its numbers are good because the retailer does the small things repeatedly and consistently, chief executive officer Neville Noronha has said in the past.

D-Mart has been choosy about the products it stocks; it doesn’t have the widest product assortment. It eschews discounts, the bane of both brick-and-mortar retailers and e-commerce marketplaces. It does not intend to follow a discount model in the future either, its prospectus said.

“D-Mart’s big strength is its product assortment, competitive pricing and a well-managed supply chain which ensures the product is always available on the shelf,” said Rajat Wahi, partner and head of consumer, retail and agri sectors at KPMG in India.

The D-Mart listing on Tuesday hit other listed retailers. Shares of rival V-Mart fell 11% while those of Shoppers Stop and Future Retail were down 2-3%.

That said, with its 114% rise, the stock is trading at a rich 80 times its estimated earnings for fiscal 2017.

“The stock definitely looks expensive right now. But then, it is the story of new India, and the potential for growth is limitless,” said Raamdeo Agrawal, joint managing director of Motilal Oswal Financial Services Ltd.