MUMBAI: The government is likely to tap Indian Bank chief executive MK Jain to try and turn around troubled IDBI BankBSE 2.17 % after seeing his hand in the stunning transformation of the Chennai-based lender. Jain, who is credited with making Indian Bank profitable, would swap positions with IDBI Bank chief Kishor Kharat, who would move to head Indian Bank.

This is the first time in recent memory that such a move is being considered and it is likely to set a precedent with performers being rewarded with challenging assignments, said two people familiar with the matter. A formal announcement is likely soon. Jain and Kharat could not be immediately reached for comment.

Jain’s selection was also prompted by the realisation that IDBI Bank needs stable leadership for some time so that a turnaround can be sustained. Jain has three years to go.

IDBI Bank reported record losses recently, and Jain would work to help recover dud loans amid an overall freeze in other operations of the bank, said the people who did not want to be identified.

Under Jain’s leadership, Indian Bank shares have delivered an over-three-fold jump in returns even as many of lender’s peers have struggled amid rising bad loans. In contrast, IDBI Bank is up just 22% from its year’s low. The stock price of the two banks reflects their financial performance over the past year. 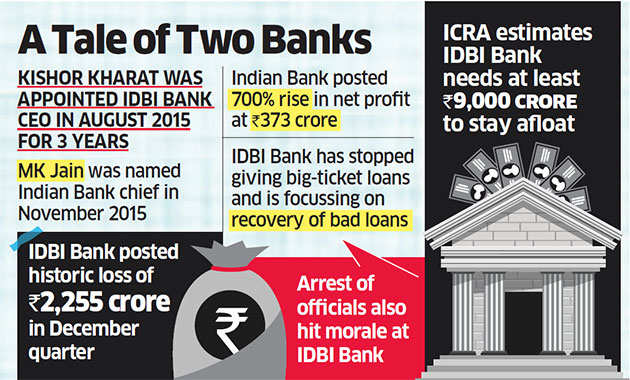 IDBI Bank also had to contend with sagging morale after the Central Bureau of Investigation arrested five of its officials over alleged irregularities in lending to the failed Kingfisher Airlines.

Jain joined Indian Bank in No-vember 2015 and in the past one ye-ar has overseen a remarkable tur-naround. Net profit jumped nearly eight-fold to Rs 373.47 crore in the quarter ended December 2016 and earnings per share improved to Rs 7.78 in the same quarter from Rs 0.88 in October-De-cember 2015.

IDBI Bank, on the other hand, posted a record loss of Rs 2,255 cro-re in the Decem-ber quarter as it had to make huge provisions for bad debt which stood at 15% of the total loan book. Due to poor de-mand for loans and non-payment of dues, the bank’s net interest in-come crashed 45% to Rs 850 crore while non-interest income fell 5% to Rs 551 crore.

ICRA, which downgraded the bank’s rating, has said the lender would need at least Rs 9,000 crore to stay afloat, which is almost the bud-geted capital investment by the central government for all banks.