MUMBAI: The PSA Group, the French automaker that recently acquired the iconic Ambassador brand, is aiming to do a Renault in India: making vehicles for the Indian buyer at Indian cost. The company that owns the Peugeot, Citroen and DS brands is hoping to be third-time lucky in India. It withdrew from the country in the late 1990s, ending a brief joint venture with Premier Automobiles that launched just one car. The second attempt in 2011 was aborted, after it even bought land in Gujarat for a factory, as Europe’s debt problems turned the continent’s companies cautious.

India is again on its radar as the market is the fastest growing — the industry is predicting double-digit expansion in passenger vehicle sales this fiscal — making it enticing in an otherwise slow moving automotive world. PSA isn’t eyeing the entry segment, the biggest in terms of unit sales in India. It is targeting to bring in a series of smart cars. The first product could hit the Indian roads in 2020. According to four people in the know of the PSA Group’s plan, the core of the French car maker’s entry into India will be an SUV-inspired hatchback that will be positioned in the Maruti Suzuki Swift segment.

It will be followed by a compact SUV and a mid-size sedan. It has engaged Tata Technologies and Tata Consultancy Services for engineering development and sourcing support in India to do a portfolio of cars – internally called Smart Car 1, Smart Car 2 and Smart Car 3. 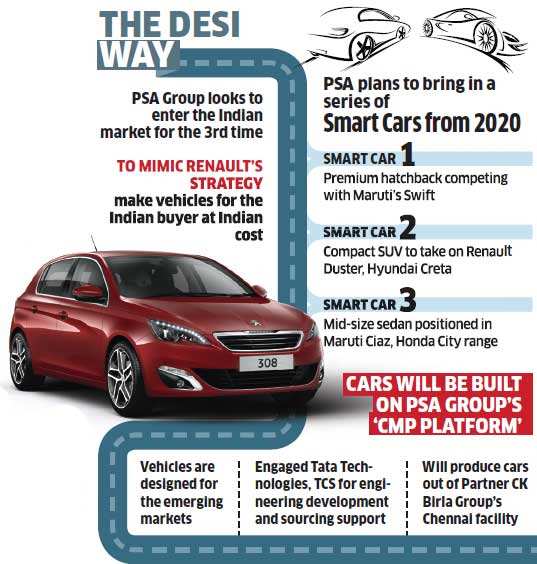 “The company is not eyeing the entry-level segment, but is looking at the upgrader segment. The Smart Car 1 is aimed at premium hatchback buyers, Smart Car 2 is a compact SUV to take on the Renault Duster, Hyundai Creta, and Smart Car 3 is a mid-sizesedan aimed to be positioned aggressively in the Maruti Suzuki Ciaz and Honda City range,” said one of the people. These cars will be built on PSA Group’s ‘CMP platform’ which is modular in nature and enhances commonality of parts.

The vehicles are designed for the emerging markets, which have a potential to add half a million units to the company’s sales. Apart from India, PSA will be targeting the markets of Iran, Latin America and the ASEAN region with these models. The SUV is likely to hit the Indian market a year after the hatchback makes its entry, and the third car a year later. The company has timed its entry well. With India set to implement new safety and emission regulations post 2020, it will allow PSA to price its vehicles closer to market leaders Maruti Suzuki and Hyundai Motor, which will have to upgrade their vehicles to the new standards.

In a recent interview on the sidelines of the Geneva Motor Show, PSA Group chief executive Carlos Tavares told ET that India was one of the most demanding markets. The pressure is high on prices and the expectations on the value of the products are big. “We need to humble (ourselves), we need to learn and we need to do things with right timing; all of this will take time,” said Tavares.

When queried on the Smart Car strategy, Tavares said: “We are making this investment for the future, smart cars is one possibility we are working in. But we will see how things evolve from here on, but it is too soon to talk about.” The PSA Group which formed a joint venture with India’s CK Birla Group, will be producing its cars out of the latter’s Chennai facility.