Delhi’s Rail Bhawan will witness some construction work in the next few weeks. A contract has been awarded to build a 125 sq m prefabricated office on a third-floor terrace not far from the cabins of the members and chairman of the Railway Board — the highest decision making body of the Indian Railways (IR). The new hall is designed to give a look and feel of a corporate office — a common area surrounded by 9 sq m cabins, each meant for one adviser (an additional secretary-ranked officer) and eight executive directors whose counterparts in other parts of the rail headquarters are entitled to have cabins of at least double that size.

Say hello to the IR’s newly created Transformation Cell, where the size of cabins will not be the only distinctive feature. None of those officers drawn from disciplines such as traffic, engineering, electrical, mechanical, personnel and accounts will get a personal assistant. Nor will there be a peon. According to an office order issued last week, this cell will have a common secretariat comprising a section officer, two assistant section officers, one private secretary, one private assistant and one multitasking staffer.

The cell is mandated to implement 55 new ideas that originated in the Rail Vikas Shivir, the first-of-its-kind railway offsite held in Haryana’s Surajkund in November last year, and which was attended by Prime Minister Narendra Modi. To begin with, it will hire about nine young professionals — MBAs, BTechs, CAs — from the private sector assist railway officers, something the government behemoth, with a 1.3 millionstrong workforce, is unfamiliar with. The cell is also allowed to collaborate extensively with global and national think tanks, institutions, academia, technology and knowledge partners and domain experts from the private sector.

Railway Minister Suresh Prabhu explained the rationale behind creating a cell that would be manned both by railway officers and domain experts outside the railways. “We will import new ideas from outside the railways, but the implementation has to be done internally… In the Transformation Cell we have selected some of the most promising and relatively younger officers from the railways who will take ideas from outside but closely interact with rail talent to implement them. Thus, we have the best of the two worlds.” Prabhu added that out-of-the-box ideas are a must to bring the IR back on track.

The new cell is headed by Sudheer Kumar, an officer from the Indian Railway Service of Electrical Engineers, who was key in fast-tracking the electric locomotive factory in Bihar’s Madhepura in partnership with Alstom. As IR’s executive director (electrical development) two years ago, Kumar signed the memorandum of understanding with the French multinational, kickstarting the IR’s biggest public-private partnership.

Kumar, an adviser, and his team of executive directors have now shortlisted 55 of the best of the over 1 lakh ideas that came up at the Rail Vikas Shivir. The ideas that the new cell is gearing up to implement include increasing carrying capacity by introducing more double-stack containers to target textiles, auto and white goods sectors, putting up some two lakh screens across 2,175 stations for displaying passenger information and advertisements, implementing access control systems at about 400 stations and rebuilding railway colonies through public-private partnerships, among others.

Radical? Perhaps not. “Barring a few, most of these ideas have been known to the railways for years. The success of the new cell will depend on how smartly those ideas get implemented,” says SS Khurana, former chairman of Railway Board, adding that the IR has a huge talent pool but problems emerge as officers fail to walk the extra mile and see the big picture for the railways. Khurana, who headed the railway board in 2009-10, adds that he personally knows some of the officers selected for the cell and they are “outstanding”. 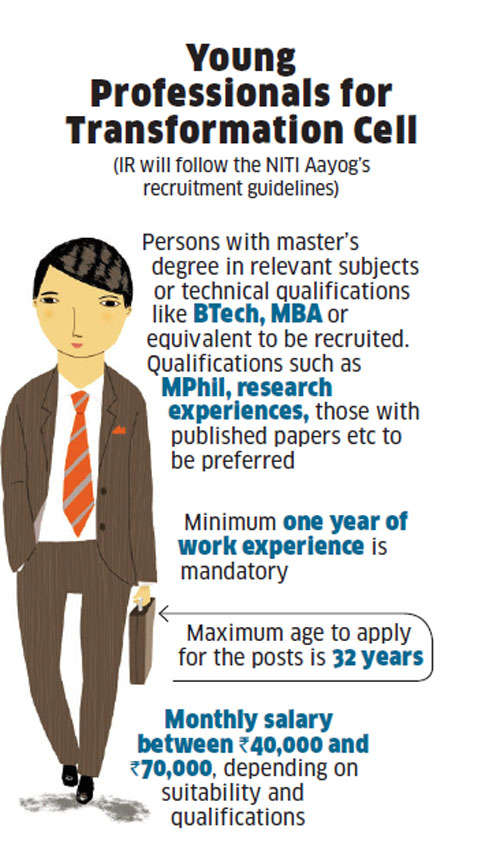 Khurana has his reservations on the IR’s decision of manning the cell with MBAs and engineers from the private sector. On principle, he says, he agrees with the need for recruiting domain experts from outside the government. But the move will be successful only if the government hands out attractive compensation packages to the experts and empowers them to implement their own ideas, argues Khurana.

According to the two-page office order for creating the new cell, “young professionals” will be hired from the private sector, for which the IR will follow the guidelines as prescribed by the NITI Aayog. According to NITI’s guidelines issued last year, young professionals need to be below the age of 32 and their monthly salary would range between Rs 40,000 and Rs 70,000, raising doubts whether extraordinary private sector talent would come forward to work with the government at that pay scale.

Nagging Obstructions
At least three railway officers told ET Magazine that there is some amount of cynicism around the creation of the cell. In an internal WhatsApp group of rail officers, the photos of the cell’s newly appointed officers are being morphed and circulated with captions dripping with sarcasm. of them: “Hey, here are the transformers of Indian Railways!”

VG Bhooma, a serving IR officer currently pursuing her PhD on transformation of railways at IIT-Madras, says some amount of cynicism and criticism of such a bold move is par for the course, and that will be effectively overcome.

“Indian Railways has energy at the bottom, thoughts at the top. The challenge is to marry two,” she says, adding that there’s no dearth of innovative ideas in the IR. “Many officers in the field share with me their new ideas as they know I am doing research on how to undertake transformational changes in the railways. This is the time for transformational changes, and not incremental ones,” says Bhooma who expects to complete her thesis by the end of next year.

The modality of the new cell with a common work area and with a direction that its adviser will report directly to the chairman of railway board itself is transformational in nature; it will be a break from the IR’s usual culture of working in silos. Sample this: Adviser (finance) in the railway board sits in a cabin on the third floor of Rail Bhawan. His deputy, the ED (resource mobilisation), sits on the fifth floor, with the deputy director and the section on the fourth floor.

What will really make the new cell stand out is the IR’s decision to empower its adviser to report directly to the chairman, thereby shortening the bureaucratic layers in decision-making. “A Transformation Cell file will typically need four to five signatures as against an usual railway board file needing over 30 signatures. That will bring about a major transformation in the way decisions are taken,” says an official connected to the initiative.