NEW DELHI: Vertex Ventures, a member of Singapore government’s investment company Temasek Holdings, is set to close fundraising for its next fund focused on Southeast Asia, including India, with a target size of $150-180 million.

Temasek, which has cumulative committed capital in excess of $2.5 billion, has already started making investments from this fund, a person familiar with the matter said on condition of anonymity.

In response to ET’s queries, Vertex Ventures said that it is currently in its silent period and will not be able to comment on the development. 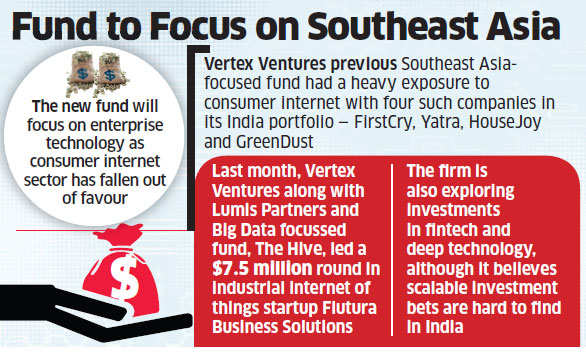 The new fund will engage in Series A investments ranging from $3 million to $5 million. It comes at a time when the focus has shifted to enterprise technology as the most important sector given that consumer internet has fallen out of favour.

The company’s previous Southeast Asia-focused fund, which has been completely deployed now, had a heavy exposure to consumer internet with four such companies in its India portfolio — FirstCry, Yatra, HouseJoy and GreenDust.

“The fund’s focus has always been twofold, consumer and enterprise tech, and both these have to have a strong equalisation in terms of allotment. However, at the moment, the focus has shifted to enterprise technology where there are a lot more very good opportunities than on the consumer side,” said the person cited earlier.

In the past one year since the fund’s two-member India team, headed by Ben Mathias, has been in place, the fund has been more focused on enterprise technology than on any other sector including consumer internet, said the person.

The fund’s recent investments reflect this shift. Last month, Vertex Ventures along with Lumis Partners and Big Data focussed fund, The Hive, led a $7.5 million round in industrial internet of things startup Flutura Business Solutions. Late last year, Vertex Ventures had led a $6 million round in software as a service-based customer experience management platform CloudCherry along with other investors, Cisco Investments and IDG Ventures India.

The firm is also exploring investments in fintech and deep technology, although it believes scalable investment bets are hard to find in India.

“There is lot of noise around chat bots and machine learning and stuff, but in reality there are very few applications wherein these technologies are getting deployed today. Businesses here won’t have a scalable model in the near term,” said the person.