The passing of the Enemy Property (Amendment and Validation) Bill 2016 by both houses of parliament paves the way for the government to monetise assets worth more than Rs 1 lakh crore, which will come as a nice cushion at a time when the government is looking at ways to control the fiscal deficit.

The amendment now empowers the Custodian of Enemy Property (CEP) to sell such assets, which wasn’t permitted under the old Enemy Property Act, 1968. The official, appointed under the 1968 Act, was entrusted with the custody, management and administration of assets deemed enemy property after the India-China war of 1962 and the wars with Pakistan in 1965 and 1971. The authority, under the home ministry, can now sell these properties.

Data provided in the report of the parliament select committee on the bill released in May last year reveals that there are 9,280 immovable properties belonging to Pakistani nationals encompassing 11,882 acres. The total value of immovable properties that are vested with the custodian stood at Rs 1.04 lakh crore. Movable vested properties consist of shares in 266 listed companies valued at Rs 2,610 crore; shares in 318 unlisted companies valued at Rs 24 crore; gold and jewellery worth Rs 0.4 crore; bank balances of Rs 177 crore; investment in government securities of Rs 150 crore and investment in fixed deposits of Rs 160 crore.

Besides this, there are 149 immovable enemy properties of Chinese nationals with the custodian in West Bengal, Assam, Meghalaya, Tamil Nadu, Madhya Pradesh, Rajasthan, Karnataka and Delhi. 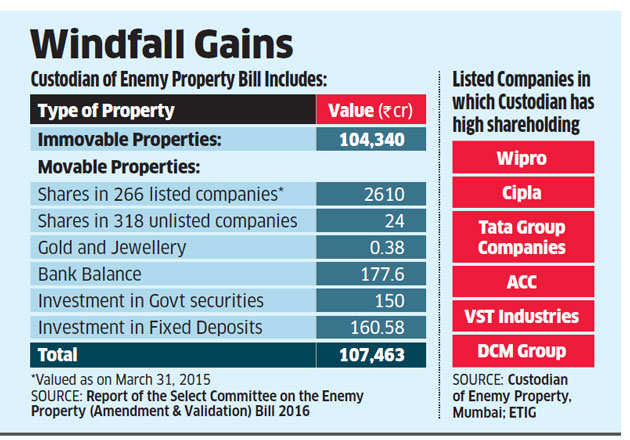 “The custodian has the power to dispose or sell enemy property as well as to evict illegal occupants,” said Bhupendra Yadav, member of parliament and chairman of the select committee on the amendment bill. This would also entail suitable amendments to the Public Premises (Eviction of Unauthorised Occupants) Act, 1971.

The amendment is retrospective in effect and bars any enemy or enemy firm from having any right of transfer of any property that is vested in the custodian. Civil courts are barred from adjudicating on matters pertaining to enemy properties with succession laws not applicable to these. The select committee report elaborates on the rationale of the amendment.

In the initial stages of the functioning of the custodian, courts upheld automatic vesting of enemy properties in the custodian and restrained themselves from interfering in the orders passed by the custodian. Later, however, there have been judgments by various courts–the union of India vs. Raja Mohammad Amir Mohammad Khan being the landmark one–that adversely affected the powers of the custodian as provided under the old Act.

Besides, according to the ministry of external affairs, the Pakistan government has disposed of all enemy properties in that country.

“Earlier, it used to be possible under Section 18 of the old Act that the property under the custodian could be divested and returned to the original owner or his legal heir,” said Jatin Zaveri, a Supreme Court advocate. “However, by widening the definition of enemy to include legal representatives or heirs and including the new Section 8A that empowers the custodian to dispose of the enemy property vested in it, it is no longer possible to make claims on an enemy property and the government is free to dispose it off and monetise it.”

The home ministry’s annual report for 2015-16 states that the government has opened two new branch offices of the custodian at Lucknow and Delhi in 2014 and intends to detect more enemy properties in various states by conducting a countrywide survey. The survey has begun in Uttar Pradesh, West Bengal, Delhi, Madhya Pradesh and Kerala.

“To be sure, enemy property is different from evacuee property,” said Yadav. While the former is the fallout of India’s conflicts with China and Pakistan, the latter refers to assets abandoned at the time of partition.

The select committee report mentions the crucial vesting period for assets of Chinese nationals has been determined as running from from October 26, 1962, to January, 10, 1968, and that for the Pakistani nationals from September, 10, 1965, to September 26, 1977.

One of the recommendations of the select committee was that the process of identification of enemy properties should be completed within two years from the date of enactment of the amendment.

Immediately after the passage of the bill, the custodian should dispose of all non-contentious enemy properties without delay.