MUMBAI: RBI intensified efforts to rein in the surging rupee, making informal inquiries with big banks on Wednesday about open positions to send a clear signal that it’s reaching the end of its tolerance limit for speculative activity as the currency raced to a fresh 16-month high, dealers said.

Although the Indian currency has been swimming against the tide in the Asian markets by being the only one to gain this month amid a slide by all others, the intervention by RBI is being seen as an attempt to use the currency as a cushion against inflation besides teaching speculators a lesson.

Short sellers are rushing to cover positions after getting caught off guard by the magnitude of BJP’s victory in state elections in UP and elsewhere that’s widely expected to lead to accelerated reforms. That’s pulling in overseas investment and causing the rupee to strengthen, dealers said.

“The surging rupee defies other global trends,” said Keta Kurkute, vice-president, forex risk advisory, at Mecklai Financial. “Corporates/traders are struggling to find out what inflows are triggering such rupee rally. Traders, who went long (on the) dollar are left with little option but to unwind positions, booking losses. Also, holding open positions on shorting the dollar is not encouraged.” 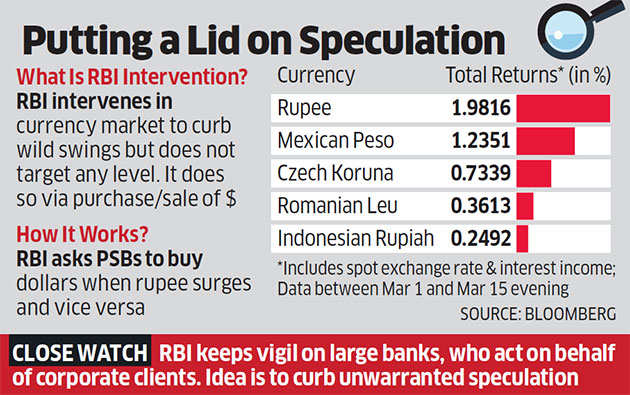 The rupee, among the best performing currencies in Asia this year, rose 3.28% to 65.69, the highest level since November 4, 2015. The local unit hit an intra-day high of 65.41before RBI intervention.

RBI has no stated preference for the rupee’s level or direction but its interventions, typically through PSBs, are aimed at stemming volatility that threatens to compromise market stability.

RBI doesn’t respond to queries on currency market intervention. In February, RBI governor Urjit Patel had said the rupee — trading at around 67 to the dollar at the time — was broadly where it should be.

Dollars are flooding in just as there’s an outflow from other emerging markets in anticipation of a series of interestrate increases in the US. While currency traders in general have been long on the dollar and short on the local currency in line with global trends, the contrarian movement in India seems to have caught them on the wrong foot.

In terms of total returns, adjusting for interest rates, the rupee has yielded 1.98% versus 1.24% by the Mexican peso between March 1 and now, according to Bloomberg data.

The outlook on economic reforms has brightened after BJP won an absolute majority in Uttar Pradesh and is in the process of forming governments in four of the five states that went to the polls.

Foreign portfolio investors invested Rs 27,636 crore on Wednesday, Rs 23,007 crore of that in equities and Rs 4,629 crore in bonds, according to data from NSDL, a depository.

“Rupee shows no sign of weakness even if the US Fed is expected to raise fund rates,” said Anindya Banerjee, currency analyst at Kotak Securities.

“Overseas fund inflows and liquidation of long positions are driving the local unit rather than fundamental macroeconomic factors. The market is now rife with speculation while discussing the central bank’s stance on the latest moves.”

Further gains may be dependent on global factors, which would be determined by the US Federal Reserve’s stance on rates.

During the day’s trading, many stop losses were triggered as some traders’ calls on the long dollar went awry.

Rupee trades flat at 71.12 per dollar