Mumbai: Global prices of solar modules, a key component in setting up solar power plants, could fall by as much as one-fifth this year, companies and analysts say. That will come as a shot in the arm for Indian producers of solar power and could increase the financial viability of projects.

India has a target of setting up 100 gigawatts (GW) of solar and 60GW of wind energy capacity by 2022. Installed solar power had crossed 9GW as of December and is likely to double to 18GW in 2017 as large projects go on stream. 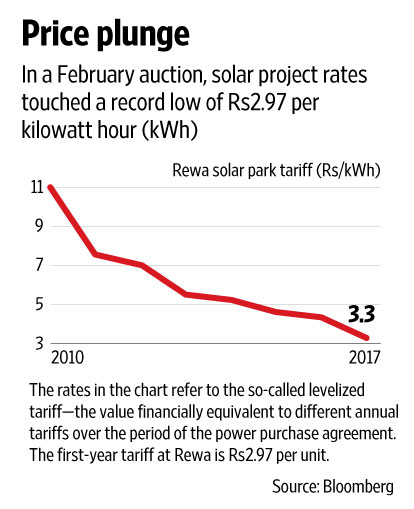 Modules make for nearly 60% of a solar project’s total cost and their prices fell by about 26% in 2016 alone, benefitting new and under-construction solar projects in India. Bidders for solar projects have quoted record-low power tariffs. In a February auction, rates touched a record low of Rs2.97 per kilowatt hour.

“Prices are likely to continue to fall and in the second half of this year, tier-1 module prices are likely to be between 27-30 cents (per watt peak),” said Sanjeev Aggarwal, managing director and chief executive of solar energy firm Amplus Energy Solutions Pvt. Ltd.

Costs of solar photovoltaic modules are falling because of oversupply in China, where rising demand has been outpaced by the rush to add capacity. While China reported solar installations of about 34GW in 2016, it is only likely to add about 28GW in 2017, putting downward pressure on prices, renewable energy consulting firm Bridge to India said in a report last week.

“Global demand is expected to be nearly stagnant in 2017 even as several large suppliers have announced significant expansions; we believe that 2017 is likely to end with prices in the range of US¢ 25-26/Wp,” the report said.

There is an oversupply situation and “prices are likely to continue to fall in 2017”, said Aditya Goel, executive director at Ornate Solar, an authorized distributor of Canadian Solar’s modules in India.

Others aren’t so optimistic.

“While prices in China have fallen 11-13%, those in South-East Asia and Taiwan are down 17-20%; but it is difficult to infer that this magnitude of fall may continue,” said Deepak Agrawala, analyst, Elara Securities.