Foreign institutional investors (FIIs) bought shares worth nearly Rs 4,100 crore on Tuesday. The huge overseas flows saw the rupee climb 1.2 per cent against the dollar to 65.82, the highest level since November 6, 2015. State-owned banks were seen buying dollars to cap gains and meet their year-end client demand for the greenback.

Most global markets traded weak on Tuesday, ahead of the US Federal Reserve’s monetary policy meeting, where it is widely expected to increase rates.

“The strong performance of the BJP in the crucial state of UP may intensify the government’s economic reform efforts, accelerate economic progress of the state and strengthen the government’s resolve to address key pending issues,” said Sanjeev Prasad, co-head (strategy), Kotak Institutional Equities. “Nonetheless, earnings will be key to the market’s performance, as global and domestic interest rate cycles will likely turn less supportive,” he added.

Most analysts don’t see much of an upside to the market from current levels, as valuations have turned expensive amid lack of earnings support and global uncertainty.
“With the market having learnt the challenges of policy implementation, the (current) rally is unlikely to be as large or as extended as the one in 2014,” said Sanjay Mookim, India equity strategist, Bank of America Merrill Lynch.
The Indian markets had rallied 30 per cent between May 2014 and March 2015 following Modi’s sweep in the Lok Sabha elections. However, the markets had given up most of the gains due to global developments and lack of sustained growth in domestic economy and earnings.

Since demonetisation lows of December 2016, the Indian markets have rallied more than 15 per cent. The rally has increased India’s valuations to above their long-term average.

“After the sharp late December rally, the market is trading at above average multiples. The market seems susceptible to global risks. March earnings may still see the effects of demonetisation. We stay cautious near term,” said Mookim, who expects the Sensex to be at 29,000 by December.

The India VIX Index, a gauge for stock market volatility, plunged 11.2 per cent to an all-time low of 12.4. Analysts suggest the sharp fall in the VIX Index indicates irrational exuberance.
“We believe the market pop is unlikely to lead to a sustained rally like other post-election results, such as in the US in November,” said Nilesh Jasani, head of Asia-Pacific Research, Jefferies & Company. “The BJP’s UP election victory is historic and massively positive but more for social, political and even economic milieu than the markets.” 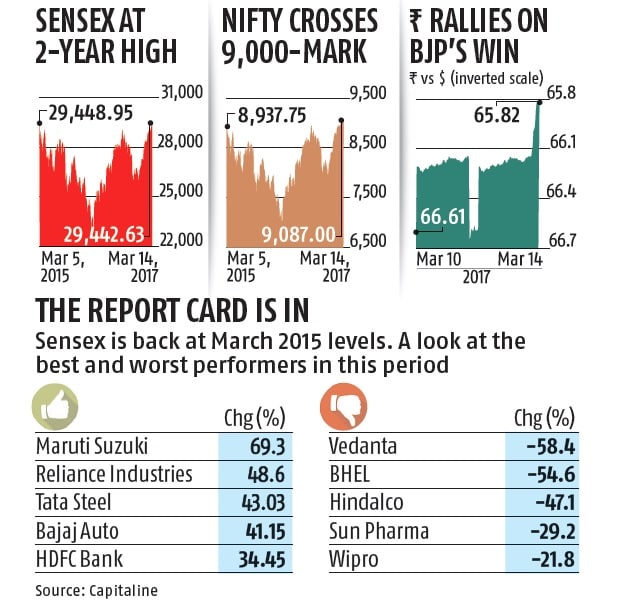