BENGALURU | MUMBAI: Digital wallets such as Paytm and MobiKwik are set to become inter-operable as Reserve Bank of India (RBI) prepares to open up the Unified Payment Interface platform for them as part of the government’s digitisation campaign.

RBI is expected to issue guidelines shortly on interoperability and ‘know your customer’ (KYC) norms for digital wallet companies, according to two people familiar with the developments.

RBI will also decide on the interchange fees between the wallets for them to be able to access the UPI framework, they said, declining to be identified.

“The opening up of the UPI framework and, in turn, the permission to allow interoperability between wallets is something the RBI is looking into very seriously and should be able to activate in 2-3 months,” one of them said. Digital wallets can currently access the UPI network through partner banks to facilitate bank-to-bank money transfers. Allowing direct access will mean that a PhonePe or a MobiKwik user will be able to send money directly to, say, a merchant with a Paytm or a FreeCharge digital wallet, expanding the usability of these instruments.

Although digital wallets are older and more widely used, UPI, which currently allows only transfer of money across banks, is gaining in popularity because of the government’s high-decibel campaign as part of its efforts to transform India into a digital economy. The government is also promoting an Aadhaar-based payment platform and another instrument for transactions using QR codes. RBI did not reply to an email sent on Saturday.

Bipin Preet Singh, chief executive of MobiKwik, said the company “is keen to partner with other financial networks to develop a collaborative financial services platform.” MobiKwik’s digital wallet has about 50 million users.

Interoperability “will strengthen the business model of a wallet since the players will not need to acquire both merchants and customers,” said Bhavik Vasa, chief growth officer at payment and wallet company ItzCash. “Gradually, the market will start expanding as the ecosystem is built.” 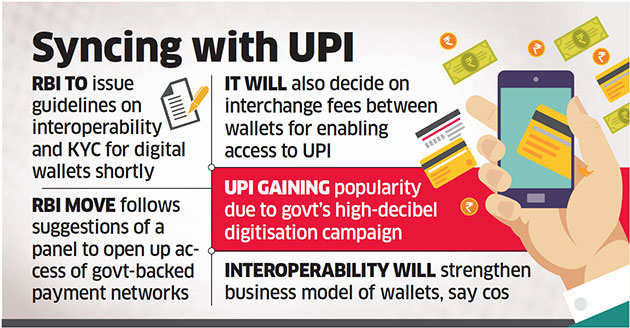 Banking industry executives expect interoperability to make the battle for the retail payments pie fiercer, similar to what happened in the ATM space when banks were instructed to allow users of other banks to withdraw money from their cash dispensing machines.

“We are hearing that the process (of opening up UPI for digital wallets) is likely to be fast-tracked,” said Ritesh Pai, country head for digital banking at Yes BankBSE 2.60 %, which has partnered with Flipkart-owned payments venture PhonePe. “Since the (prepaid payment instruments, or digital wallets) are also issued licences by RBI, the logical step is to open the UPI infrastructure to them and make it more inclusive.”

This would make digital wallets less dependent on banks but the partnerships will likely hold since the movement of money will continue to be from underlying bank accounts, Pai said. “The bank’s role will continue since these wallet players will also need to hold on to their partnerships for escrow management, settlement and reconciliation, grievance redressal, etc.”

The regulator could also have been compelled by the slow adoption of banks-led UPI apps and the poor technical ability of mid-sized and small banks to innovate with such platforms, banking industry executives said. On the other hand, digital wallet companies, powered by their strong tech teams and innovation, can bring more people to the system, they said.

The PhonePe app, which enables UPI transactions through a partnership with Yes Bank, has been downloaded more than 10 million times on Google Play store. Paytm, which does not presently facilitate UPI transfers, has 200 million wallet users.

Compare that with the Axis Pay and SBI Pay UPI apps, which have about 1 million downloads each, and ICICI Pockets UPI, which has about 5 million users. That said, the government-backed BHIM app for UPI transactions has been downloaded 17 million times since it was introduced on December 30, 2016.