NEW DELHI: In a big step to pump money into rural India and step up infrastructure creation, the government will release half of the Rs 48,000 crore FY2017-18 allocation for the Mahatma Gandhi National Rural Employment Guarantee Scheme (MGNREGS) to states at the very start of the financial year on April 1.

The Rs 24,000 crore will help states avoid backlog of payments and get the scheme running early, before the monsoon months begin and farm work is limited.

“We will then be in a position to release 50% of the total funds which will be made available to us by the finance ministry by April 1,” a senior government official told . 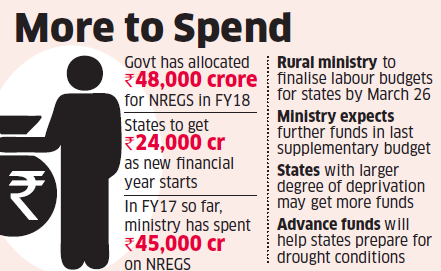 The rural development ministry is in the process of finalising the labour budgets for each state by March 26.

The rural development ministry is also expecting further allocation in the last supple Mahatma Gandhi National Rural Employment Guarantee Scheme (MGNREGS) to states at the very start of the financial year on April 1.

The Rs 24,000 crore will help states avoid backlog of payments and get the scheme running early, before the monsoon months begin and farm work is limited.
h will help clearing dues for this financial year. The ministry had sought additional funds to the tune of Rs 6,000 crore to help it achieve timely payments reach 80% in FY2017-18 from 46% this fiscal.

The advance funds would also shore up the preparedness of states dealing with drought conditions. Some global weather watchers have predicted El-Nino conditions by July, a warming of the Pacific Ocean often associated with poor monsoon in India.

In recent years, thntary budgeteing used for drought proofing and irrigation infrastructure and assets created are being geo-tagged to ensure accountability for spending. Government has set a target of constructing 5 lakh farm ponds in FY2017-18.

The Supreme Court pulled up the government last year for not providing timely wages under NREGS at a time when the country was hit by two successive years of droughts. The ministry has so far spent Rs 45,000 crore of the total allocated amount of Rs 47,500 crore during 2016-17.

“We will begin the new financial year with a clean slate if we get additional funds since a large part went into arrear payments this year,” the senior official added.

In deciding the labour budgets for states, government will try to increase spend in states which have reported a larger degree of deprivation and presence of manual casual labour.

Government has asked 25 states which received less than 75% rainfall during the monsoons this year to factor in the deficit while preparing labour budget for NREGA in 2017-18. Centre had incurred extra wage liability towards states which were declared drought affected including Tamil Nadu, Andhra Pradesh, Karnataka, Rajasthan, Uttarakhand, Uttar Pradesh and Madhya Pradesh.

Such states were eligible to get 50 extra days of work under the rural employment guarantee scheme.