The discussions are in initial stages and there is no certainty that a transaction will take place. A deal, if it happens, could close at an equity value of Rs 4,500-5,000 crore, one of the two people said.

The transaction will mark Brookfield’s first investment in India’s power sector. The asset manager has already committed about $4.6 billion in the country in toll roads and telecom towers. 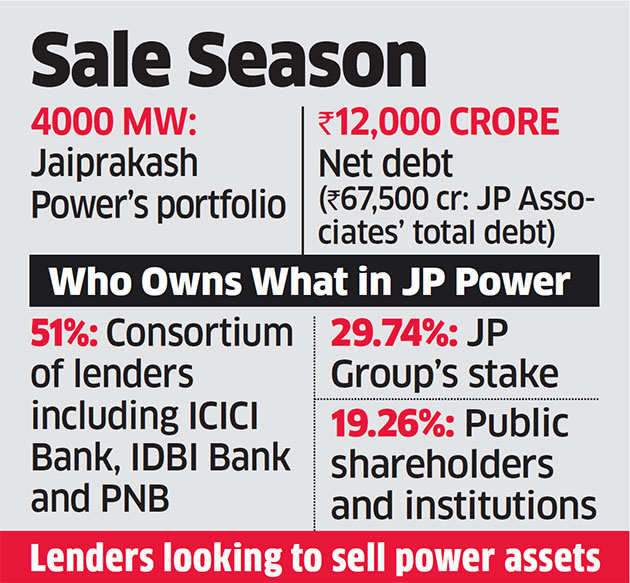 Jaiprakash PowerBSE 1.23 % Ventures’ major lenders such as ICICI BankBSE -0.25 %, IDBI BankBSE -0.13 % and Punjab National BankBSE 0.11 % took control after the firm failed to repay loans on time. Brookfield did not comment on the talks and Jaiprakash AssociatesBSE -1.29 % did not respond to an emailed questionnaire.

Last month, Jaiprakash Power VenturesBSE 1.23 % allotted 305.8 crore shares to its 23 lenders as part of a debt restructuring scheme. The allotment brought down Jaiprakash Associates’ holding in the company to 29.74%.

The group has been trying to sell assets, including core ones, in the past two years after intense pressure from lenders. In July last year, the group sold its cement business to Aditya Birla Group firm UltraTechBSE -0.84 % for Rs 19,500 crore. JP’s power portfolio of 4,000 mw includes one hydro power plant and two thermal units.

Toronto-based Brookfield is the world’s second-biggest manager of alternative assets such as real estate and private equity with $250 billion under management.

It acquired telecom tower assets of Reliance CommunicationsBSE -3.60 % for $1.6 billion in December in possibly the second-biggest PE transaction after Temasek’s $2-billion investment in Bharti Telecom in 2007.

Bulge bracket Canadian asset managers have been among the most aggressive financial investors in Indian infrastructure assets in the past two years.

“Such a transaction is better for the company as it would bring down overall debt burden significantly,” said Rajesh Gupta, managing partner, SNG and Partners, a Mumbai-based law firm. “The deal will also spell relief for lenders, especially the state-run banks, as it could help them improve asset quality.”

“Entry of Brookfield or any other sophisticated financial investor will help boost sentiment towards infra and related asset classes, and thus could attract more patient and long-term capital to the core sectors, which would be a huge positive in the long run,” Gupta added.