NEW DELHI: The Delhi High Court told former Ranbaxy promoters Malvinder and Shivinder Singh that they will have to seek its permission before selling any of their unencumbered assets. That could complicate reported plans to sell stakes in companies such as Fortis Healthcare and their Religare units, although the court didn’t pass any outright injunction against such an exercise.

The Singhs, engaged in a court battle against Daiichi Sankyo, have also been directed to furnish details of all unencumbered assets to ascertain that they will have enough funds to cover an arbitration award of more than Rs 2,500 crore granted to the Japanese drug maker by a Singapore tribunal last year.

The Court of Arbitration in Singapore had granted the award to Daiichi as damages for not disclosing relevant information to the Japanese company during the sale of Ranbaxy Laboratories. The Singh brothers are contesting this arbitration award in the Delhi High Court. 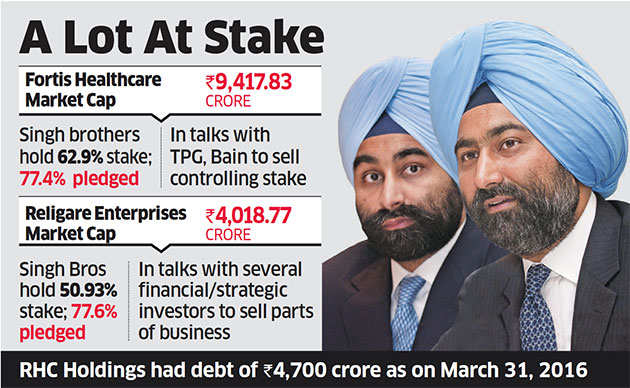 Justice S Muralidhar told the brothers and 17 other respondents in the case that they had not correctly followed his previous order on January 23 to disclose a detailed list of unencumbered assets that could be considered during the enforcement trial. The judge was hearing an application by Daiichi to block the Singhs’ reported stake-sale plan because they had not disclosed these particulars.

the Singh brothers were looking to divest management control in all key businesses — hospitals, finance, health insurance and stock broking — to raise around Rs 5,500 crore to tide over a cash crunch at the group level, citing people with knowledge of the situation.
The judge told the respondents on Monday to disclose details of all unencumbered assets, which would not be limited to loans and advances but would include all other moveable and immoveable assets as well. He further directed them to clearly indicate which of their investments are in related or group companies and which were in companies whose shares are listed.

“It is clarified that the purpose of this direction is to ascertain how much of the assets of (the respondents) are realisable towards satisfaction of the decretal amount, as and when that stage arises,” justice Muralidhar said in his order. Further, furnishing these details by the respondents will be without prejudice to the objections they have to the enforcement of the award, which the judge has said will be heard by the court on merit on subsequent dates.

AM Singhvi and Rajiv Nayar, counsel for the Singhs and other respondents in this case, told the court that they would provide these details in two sealed covers in a week’s time.

“Both Dr Singhvi and Mr Nayar state that if any change is proposed in the status of any of the unencumbered assets whose details are to be furnished… the respondents will first apply to the court,” the order said.

The court has also directed the chartered accountants for the respondents to furnish within 10 days certificates giving the value of all unencumbered assets of Oscar Investments and RHC Holdings, the holding company of the Singh Brothers.

They also have to specify to what extent are the respondents’ investments in companies whose shares are listed and which of these shares have a condition of right of first refusal. The judge will hear Daiichi’s application to block the brothers’ impending stake sales next on March 20.

HEATED EXCHANGES
The court saw heated exchanges between lawyers for Daiichi Sankyo and the Singhs on Monday afternoon. On behalf of Daiichi, CA Sundaram and Arvind Nigam asked the court to secure the arbitration award and insist on a written assurance that the Singhs would ensure the amount was set aside until enforcement. Allowing the reported stake sales would mean the involvement of third parties and dilution of assets, thus undermining Daiichi’s chances of recovering the award amount. The respondents haven’t disclosed whether there was a right of refusal, Nigam suggested.

Singhvi and Nayar said Daiichi was exaggerating a non-issue and that it was trying to choose the class of assets it would like to recover the award amount through. Daiichi had sold its Ranbaxy stake in 2015 at aprofit, Singhvi argued.

A source close to the development who spoke to ET on condition of anonymity said the court’s latest directions would have no impact on any sales in stakes of companies like Fortis Healthcare and Religare businesses.

“Our counsel stated that in case of any change in the status of any of the unencumbered assets, the respondents will first apply to the court. The order is applicable only to the parties to the litigation and the listed entities are not party to the litigation,” an RHC Holdings spokesperson said in response to ET’s queries. There is no order on any of the operating companies of the group including Fortis Healthcare and Religare, which continue to run their businesses in the normal course as separate listed entities and the court has not given any stay order, the spokesperson added.

Daiichi and the Singh brothers have long been locked in an arbitration dispute over the sale of Ranbaxy, once India’s largest drugmaker. Daiichi had first moved an application for an injunction on the sale of these assets on January 17.

The Singapore tribunal had in April 2016 given its order in favour of Daiichi by a 2-1 majority. It ordered the Singh brothers to pay the Japanese drugmaker Rs 2,562-crore in damages for concealing information regarding wrongdoing at Ranbaxy while selling it for $4.6 billion in 2008. Along with interest and legal fees, the total liability was last pegged at Rs 3,500 crore.

The Singh brothers have appealed against the order in both Delhi and Singapore, arguing that “substantive objections” exist under India’s arbitration law to make the order unenforceable.