NEW DELHI: In a major overhaul of the country’s manufacturing strategy, the government is devising a National Master Plan for manufacturing clusters.

The government will also assess big projects including the Sagarmala Project, and upcoming industrial corridors to ensure they are in sync with this master plan being worked out.

A committee formed under Amitabh Kant, chief executive officer of Niti Aayog, is expected to finalise a comprehensive master plan between June and August.

The plan, being piloted by the Department of Industrial Policy and Promotion (DIPP), will then be sent for cabinet approval. 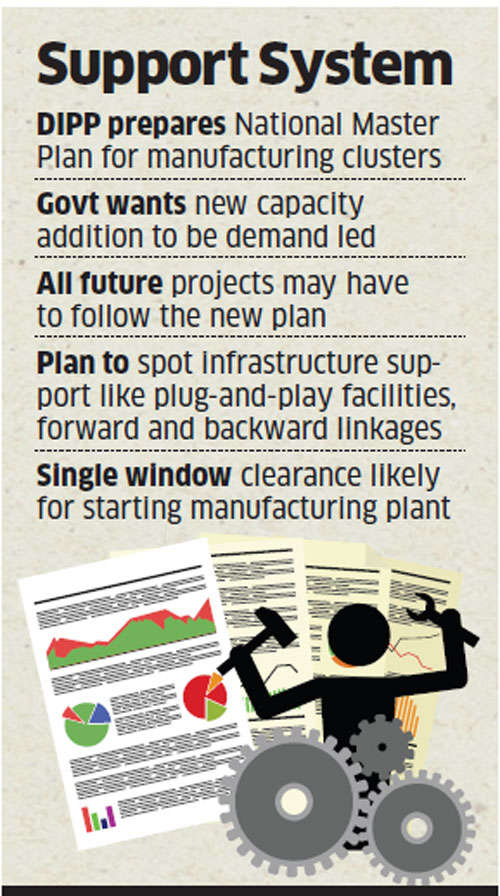 The government is betting big on manufacturing through ‘Make in India’ to create millions of jobs the country needs. It is targeting to increase the share of manufacturing in the economy to 25% by 2025 from around 18% now.

Manufacturing gross value added (GVA) is estimated to growth by 7.7% in FY17, more than 6.7% for the entire economy.

It would also include a single window clearance to substitute the current system where a starting a manufacturing plant requires over 20 approvals from the state and the Centre.

Pending this plan, the industry department is putting on hold any new addition of manufacturing nodes till it assesses the capacity utilisation in current manufacturing parks, whether they belong to Centre, states or a private entity. It has started taking stock of all existing capacities and questioning the rationale for all new upcoming industrial parks, food and leather clusters among other such facilities.

The plan will be made in consultation with states, respective ministries to ensure that all new capacity addition is demand-led, optimises the external infrastructure and does not drain taxpayer’s money.

“Creation of manufacturing zones should be in response to a demand… We can save lakhs of crores (of rupees) if we stop taking up unnecessary projects and first utilise existing capacity,” a senior government official told ET.

The government will make it mandatory for all future projects to follow the master plan.

Already the process to have a geographic information system for all existing manufacturing clusters has begun to assess the demand for industrial land and existing logistics capabilities.

“We need a complete overhaul in the way we look at manufacturing in the country…If the plan improves productivity and efficiency in the sector then we need to put a concerted effort behind it,” said DK Joshi, chief economist, Crisil.